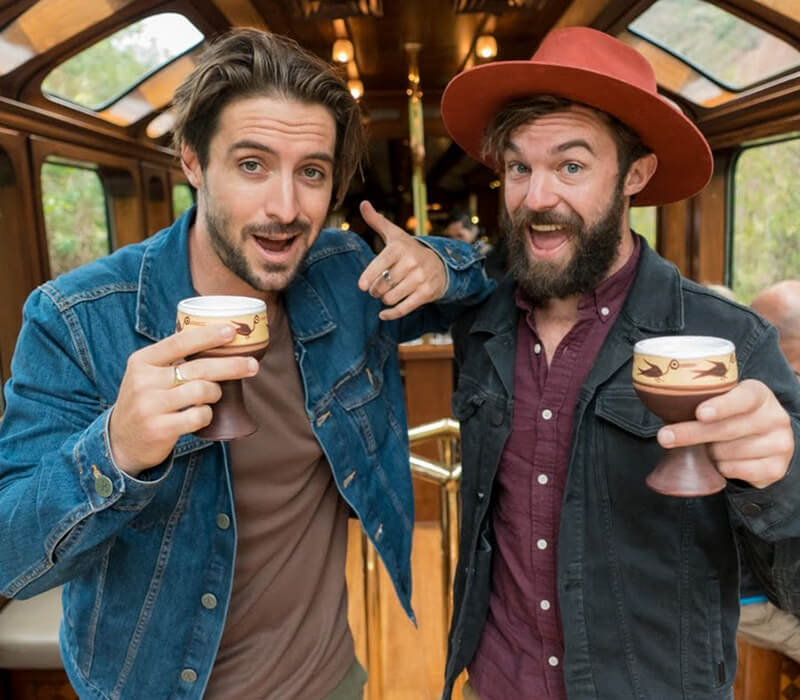 Vagabrothers is short for Vagabond Brothers. This channel, as you already might have guessed, consists of two brothers. Firstly Marko Ayling, the older and, some might say,  of the two brothers. Secondly, Alex Ayling, who is two years younger than the first half of this dynamic duo. These brothers didn’t spend much time together before they started their journey.

Vagabrothers was founded in 2012. However, neither of them realised how huge this channel is gonna become. Their mutual curiosity inspired them to create videos about hidden histories, celebrate differences and dispel stereotypes. Therefore their channel inspired over a million people who are subscribed to Vagabrothers channel and follow them on their adventures.

With a talent for storytelling, these brothers created over 200 videos from more than 50 different countries. For instance, their adventures include visiting the White House for Michelle Obama’s summit on Global Citizenship and earning them “Creator-in-Residence” at YouTube Space 2018 in LA.

Their mother was a stewardess for PanAm and their father a New Zealand ex-patriot.

Marko Ayling was born in San Diego, California, on April 2nd, 1986. He is a writer and producer with endless curiosity to discover new places all over the world. However, Marko wasn’t always the adventurer we know today. Before the whole rise to fame, thanks to My Destination’s Biggest, Baddest, Bucket List, Marko tried out a whole variety of different jobs. For instance, an English language teacher in Spain or a guidebook writer.

Alex Ayling was born in San Diego, California, on March 15th, 1988. He is an editor, filmmaker, surfer and photographer with love for nature. Likewise, Alex is also an adventurer and shares Marko’s passion for travelling and exploring.

BBB is a competition held by My destination where you have a chance to win a 6 months journey all over the world and 50,000 in cash once you get home from your adventures. The rules of entering the contest are simple.

Firstly you need to create a video about your favourite destination. You should show off the icons, secret spots and best places to eat at. Above all you need to share your passion. It doesn’t matter if you film it on a smartphone or professional camera. Content is the only thing that matters, not quality.

Secondly, you need to share a 500-word travel tale in blog post style. Pick your most emotional memory in the most colourful way you can.

Lastly, illustrate it with photos. Go through your memory box and share three pictures to show your story. Even rearranging and taking a new picture counts!

When Vagabrothers applied to these channels, they knew their chances were one in a million. Even though Vagabrothers had years of experience practising their filmmaking abilities when living in Spain, the competition was ruthless. Alex was always the one who felt comfortable in front of the camera, but it wasn’t the case for Marko. It took him a crazy 25 tries to even get one whole line on camera. However, Marko got better little by little.

Conveying their natural brother chemistry on camera was the best decision they could make, just like when they were young. It won them My destination biggest, baddest bucket list challenge.

Vagabrothers soaked up the family atmosphere in their hometown before they took off on their journey across the world. North and South America, the UK and Iceland. Undoubtedly, this duo had a blast in all of these places. Still, most importantly, Brazil, both of them claim that they always wanted to visit Brazil. It even surpassed their already high expectations. After taking off Brazil, this duo continued to Europe, the Middle East, Africa, Asia, Australia and New Zealand.

Alex looked forward to visiting Kazakhstan and stated that it’s sad that Borat is the first thing that comes to mind when you mention this country. It’s the 9th largest country in the world, and central Asia, in general, is fascinating. Most importantly, it’s the land of the Silk Road, where nomadic people roamed the steppes.

On the other hand, Mark enjoyed Oman. The Middle East has always been “enchanting” to him. Oman just holds the best of the region: beautiful wadis, strong traditions, hilltop castles and even ports and beaches where you can surf.

This journey held a lot of contrast housing wise. Imagine this, at first you stay in a beautiful beachfront Crane Hotel in Barbados with two ocean fronts and your own private pool on the balcony. However, on the other day, you inhabit a tent in Rancho DiAndrew in Costa Rica in the middle of the jungle. Vagabrothers lived in a penthouse apartment at the Chambers in Edinburgh or in a caravan in a West Sussex 800 person village.

Vagabrothers decided to split the $50,000 fifty-fifty and donate a chunk to a charity of each other’s choice. Alex decided on Living Tongues, a project that works to save endangered languages from extinction. At the same time, Mark will donate to Kiva, a microfinance NGO that helps people get loans to start up their own businesses.

How much do Vagabrothers earn? Net worth!

Thanks to various websites crunching some numbers, we can safely assume that Vagabrothers net worth is somewhere between $100,000,000 and $250,000,000 on the high end. The actual number is always unknown, but we can give you a rough idea of how much they earn from YouTube.

Vagabrothers YouTube channel has 1.1 million subscribers and keeps rising in popularity. It generates around 340,000 views per month. Therefore around 12,000 per day.