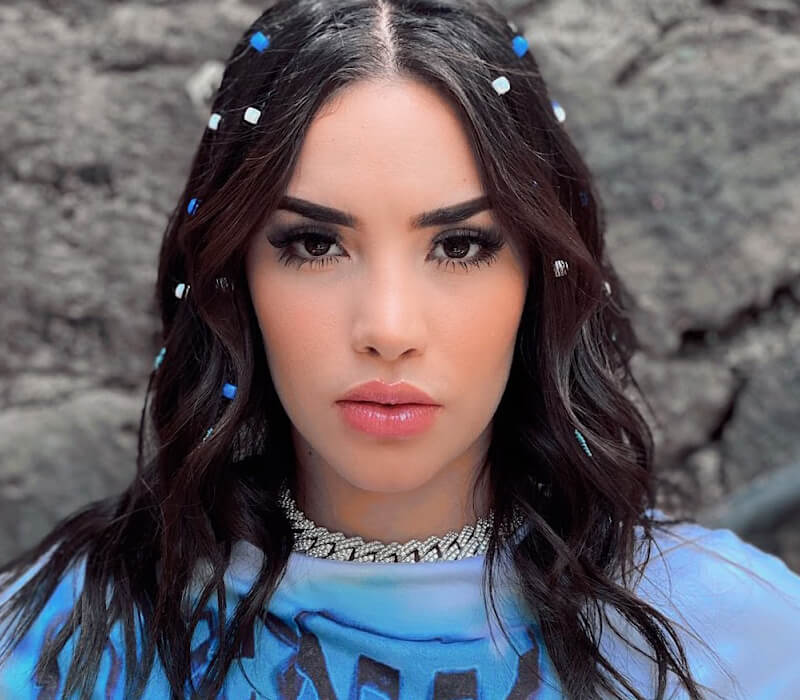 Who is Kimberly Loaiza?

Kimberly Guadalupe Loaiza Martinez, more known as just Kimberly Loaiza, is a Mexican social media influencer and singer. She became one of the most-followed YouTube channels in Mexico.

Most importantly, Kimberly is a TikToker and YouTuber who was born in Mexicali, Baja, California. She lived her first 8 years there and then moved to Mazatlan, where she lived for 10 years. After a while, she ventured to live alone in Tijuana, where she currently lives.

Kimberly Guadalupe Loaiza Martinez was born on 12th December 1997 in Mexicali, Mexico. She has two younger siblings. Sister Steffany and brother Carlos. Her family lived in Mexicali for some time. After that, her family moved to Mazatlan, Sinaloa, when she was only nine. Sinaloa is also the birthplace of her husband.

She had an on and off relationship with a fellow content creator Juan De Dios Pantoja. Their relationship hasn’t been easy, and at one point, intimate videos of Juan and Mexican TV Host Lizbeth Rodríguez claimed to have content proving his infidelity with other people.

In 2019, Kimberly gave birth to their first child Kima. Although things didn’t change. There were allegedly rumours circulating that Juan had been unfaithful with other women but also other men. The allegations were complex on the couple, and they decided to separate and work on their issues together out of the spotlight.

“I was humiliated. I did not know that someone had something of mine. Yes, I am ashamed that people know my private parts. It’s a blow to the family, to my girl, it’s psychological things that really affect,” Juan said once his nude photos and videos were leaked with another woman.

The career of Kimberly Loaiza

In 2016, Kimberly Loaiza started her career by creating her YouTube channel. Since then, Kimberly grew enormous popularity by sharing everything from her personal life to her music videos to daily vlogs. She gained over a billion YouTube views and became one of Mexico’s most-followed YouTube channels.

In addition, Kimberly has millions of followers on Instagram. The content creator shares photos of her daughter, Kima, as well as professional modelling photos, selfies, personal photos and more.

In 2019, Kimberly decided to kick off her music career and released her debut single “Enamorarte.” The single charted in many Spanish-speaking countries. Her second single, “Amándote,” was the highest viewed single on YouTube the first weekend it was posted. Her latest singles, “Don’t Be Jealous” and “BYE BYE”, featuring JD Pantoja, continue to trend.

Kimberly manages all of her social media channels really well and is all over the internet.

On 16th November 2016, Kimberly created her self-titled YouTube channel. As of 2022, she amassed over 35.1 million subscribers and more than 3.7 billion views. She posted her first video nearly one month later. Her most popular video, “ROAST YOURSELF CHALLENGE / Kimberly Loaiza Ft. JD PANTOJA”, was posted on 10th October 2017. It amassed over 150 million views and more than 3.5 million likes.

Kimberly Loaiza has over 16 million followers on Facebook. She often showcases her videos on different platforms, shares modelling pictures and announces concerts.

In April 2011, Kimberly created her Twitter account. She has over 7 million followers and more than 2,500 Tweets. Kimberly is very active on Twitter and sometimes even posts multiple times per day.

Kimberly Loaiza has over 33 million followers on Instagram. She often posts high-quality modelling pictures and photos with her family.

Thanks to her singing career, Kimberly is also really popular on Spotify. Five of her songs “Mejor Sola”, “Ya No Somos”, “Me perdiste”, “De Lao Remix” and “Apaga la Luz”. She has nearly 3 million monthly listeners.

Kimberly Loaiza is definitely most prominent on TikTok. As of 2022, she has over 58.2 followers and more than 3.4 billion likes. She is currently placed in the Top 10 most followed TikTok influencers, with 6 million followers behind Will Smith.

How much does Kimberly Loaiza earn? Net worth!

Kimberly Loaiza has an estimated net worth of roughly $10 million. Some sites even claim her net worth is as high as $12.2 million. Kimberly generates her money through ad revenue and sponsorships. She could earn as high as $68,000 per sponsored post on Instagram or TikTok.

In 2019, Kimberly decided to dabble into a singing career.