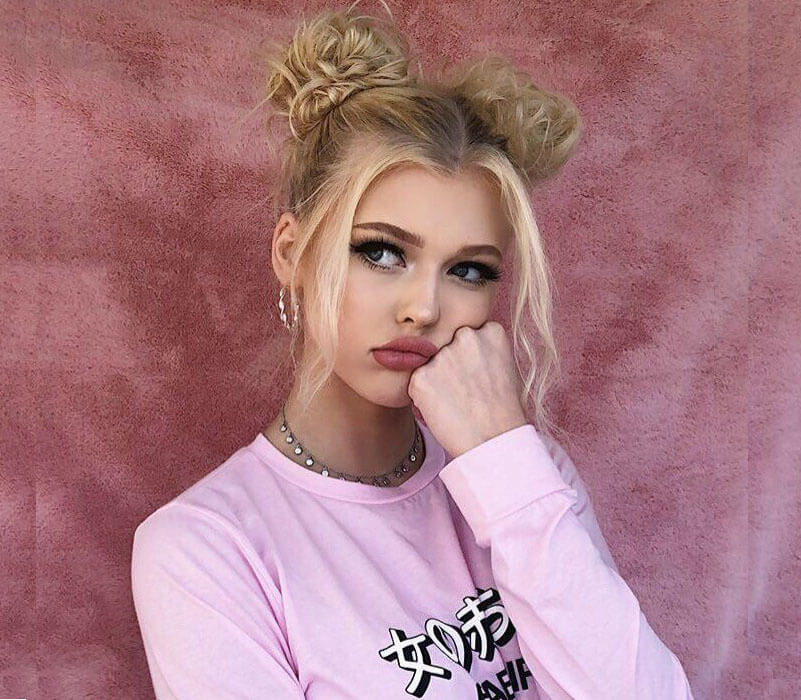 Who is Loren Gray?

Loren Gray Beech is an American model better known just as Loren Gray. Besides being a model, Loren is also a singer and social media personality with a broad reach.

Loren is most known for her TikTok career, where she is 11th, less than a million followers short of surpassing Spencer X on 10th place. Between the years 2019 and 2020, Loren was the most followed TikTok influencer.

Loren was signed to Capitol Records and Virgin records. In February 2021, she became an independent artist.

Loren Gray was born on 19th April 2002 in Pottstown, Pennsylvania, United States. She was raised by Jeremy Gray, who is a biologist and Loren Gray, who is a hairstylist. Loren has one older sister Jordan Gray.

Loren gained some of her social media fame when she was in 6th grade. Due to her classmates bullying her and not wishing her the best, she was forced to drop and start homeschooling. After that, Loren completed her graduation at a public college in Pottstown.

Loren dated a fellow social media star Joey Kisluk. They started an Instagram account where they posted romantic pictures together. After they separated, this account got deleted.

She also dated Juwany Roman, who is also a social media star. Loren revealed that she ended her relationship with him because he was “controlling” and “jealous.” “I reject being around someone who dictates what I dress and who I speak with.”

Loren dated the singer of “Alone” Ian Jeffrey. They broke up in 2019 but reassured their fans they were still friends.

Loren has been associated with musician Kyle DeLoera, also known as DYSN. After they began posting photographs of each other on social media, the couple generated dating rumours. In September, Loren posted a photo of himself and Kyle with the caption “beeb” accompanied by a heart.

The career of Loren Gray

Loren Gray started her career on musical.ly in 2015. She was actually influenced by her friends to start posting. Her popularity even spread to other social media, and different people started reacting to her videos. Even various compilations of her music started popping up on YouTube.

After becoming more successful than them, her friends started being jealous. They turned on her, claiming she had no talent. Some of her friends even deleted their accounts and started bullying Loren.

Loren stated in a UPROXX interview: “They would write awful things that I had no talent, that I’m rude, that I have lip fillers, and I’ve had work done. I was albino, I was anorexic. People were saying they were gonna jump me to the point where I was in the school bathroom calling my mom, telling her I was scared.”

Loren’s mom decided to put an end to this and took her out of school. They moved to LA, where Loren was homeschooled. With this flexible schedule, Loren could pursue her musical career.

Loren landed deals for duets, choreographies, voiceovers, advertisements. Everything is featured in her videos.

Later, Loren took her musical career even more seriously and talked with various labels. She signed a deal with Virgin Records and Capitol Records.

Loren’s dad shared when he talked with his manager: “Her manager at the time, he was like, ‘Do you know how huge this kid’s gonna be? I was like, ‘Man, I’m starting to get the idea.’… They just sat her down and said, ‘So where do you envision yourself?’ Loren said, ‘I want to sell out arenas’.”

On 11th July 2019, Loren was the second celebrity to be part of the “Creator Show” series on Snapchat. The series was called “Glow Up” and showcases Loren’s beauty and makeup tips via tutorial videos.

Loren had many musical influences throughout her years. Most importantly, she shared that her songs come from a position of vulnerability that can make you tear up or remember lost lovers.

She initially used her full name, Loren Beech but then switched to Loren Gray for apparent reasons.

Loren has a self-titled YouTube channel with nearly 4 million subscribers. This channel is active, and Loren posts about 1 or 2 videos per month. Anything from skincare routines to vlogs or her own songs. A video where Loren unpacks her memory box and Harley Quinn makeup box have more than half a million likes. Her most famous song is “Queen,” with over 17 million views on YouTube alone as of 2021.

Her most dominant social media is TikTok, where she has over 55 million followers and 3 billion likes. For some time, Loren was a number 1 TikTok personality, but she was surpassed by Charlie D’Amelio in April 2020. She has more likes than some higher rated TikTokers because she has been part of the platform since she was 13 years old. Most of her videos are the latest TikTok trends shot in top quality. The reason behind her drop-in TikTok ladder is because she decided to focus more on her musical career, and people just started doing more original content than her.

How much does Loren Gray earn? Net worth!

Loren Gray has an estimated net worth of $5 million. Most of her earnings come from social media, music and her own jewellery line.

Thanks to her vast social media reach, Loren landed herself sponsorships with Burger King and Revlon brands. She is expected to take as high as $150,000 per post.

As a singer, Loren released singles “Kick You Out”, “Options”, “My Story”, “Queen”, “Lie Like That”, and “Can’t Do It” (feat. Saweetie). There is not much known about Loren’s earnings through her music, but to give you a perspective. Her collaboration with Lost Kings, called “Anti-Everything”, reached #32 on the US Dance chart. In 2020, Loren even appeared in the music video “The Man” by Taylor Swift.

In December 2020, Loren released her own jewellery line, “&always”.