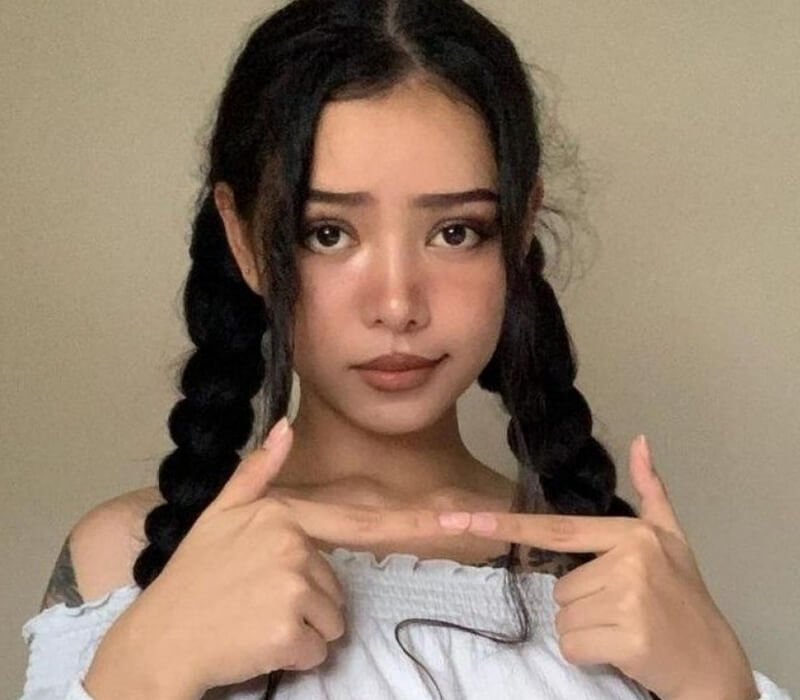 Bella Poarch is a social media personality from the Philippines, but she is living in the USA since early childhood. She is best known for her specific video on TikTok, in which she lip-syncs the song "Soph Aspin Send" by British rapper Millie B. This video was posted on August 18, 2020, and is the most liked video in TikTok history.

Bella started her singing career as she released her debut single "Build a B*tch" in May 2021. As of today, Bella is the third most followed individual on TikTok, just behind Charli D'Amelio and Addison Rae. She has over 73 million followers and 1,6 billion likes on her TikTok account.

Who is Bella Poarch?

Bella was born on February 8, 1997, in the Philippines. She loved music, singing and art since early childhood. Bella was one of those girls who like to play computer games and watching anime. Anime is a Japanese style of animation and drawing. Bella is known for her big passion for Naruto. Bella even said she sometimes wishes she lived in the anime world. Poarch loves to play Fortnite, Warface and Minecraft. Her family decided to move to Texas at the age of 13.

We would love to give you every detail of Bella's life. However, there is not much information revealed as she keeps her privacy secured. According to one of her TikTok, Bella was actually adopted.

Poarch serves in the U.S. Navy, she enlisted in 2017 and served for three years. Bella was reportedly stationed in Pearl Harbor, Hawaii and in Japan. She is now a U.S. Navy Veteran. Poarch revealed on her Twitter in August 2020 she is diagnosed with major depressive disorder and posttraumatic stress disorder (PTSD) since 2017. Bella is currently living in Hawaii.

Bella Poarch created TikTok account @bellapoarch in January 2020. Her content was mainly focused on gaming and cosplay content in the first months. She began doing lip-syncing videos in August, and after that, she started gaining fame. Her posts were typically zoomed-in videos of her lip-syncing and rhythmically bouncing to the tune. Her video with lip-syncing to "Sophie Aspin Send" by Millie B. went viral and became the most liked video on the platform.

In 2020, Bella Poarch released a limited clothing line, RIPNDIP x Paca. Paca is the alpaca stuffed toy she is associated with. In December 2020, two large professional Esports organizations reached Bella and invited her to their events. The organizations 100 Thieves and FaZe clan were interested in Bella because she is one of the biggest stars on TikTok, she loves gaming, and she is doing live streams for her fans.

Bella signed an exclusive record deal with Warner Records in May 2021. On May 14, 2021, Poarch released her debut single "Build a b*tch" and became an immediate success. The single was created by Daniel Virgil Maisonneuve, the producer-songwriter better known as Sub Urban. There are many exciting personalities seen in the video, for example, Valkyrae, Mia Khalifa and Bretman Rock. The public really loves the music video a lot, it was the biggest YouTube debut in history! The video gained 50 million views in just 4 days, and it crossed the milestone of 100 million views on May 26.

Poarch appeared on the podcast "The CouRage and Nadeshot Show" by 100 Thieves and talked about her personal life and connections to the song. She said she was bullied as a child for her looks, and she wanted her first song to have a good meaning and help a lot of people just to be more confident about themselves.

In June 2021, Bella announced she is going on the tour called Virgil's Mania Tour with SubUrban. The tour is in the USA only and should start on September 9 in Santa Ana and end in L.A. on October 12.

How many followers does Bella Poarch have on TikTok?

As of today, Bella Poarch has over 73 million followers on her TikTok account, which makes her the third most followed individual on the platform, just behind Addison Rae and Charli D'Amelio. Her videos are probably the most viral videos on the platform and get a dozen million views, an average of 30 - 50 million views per post, 3-4 million likes, and 40k comments.

Bella has 1,6 billion likes on her videos in total, and she is currently holding the record of the TikTok video with the most likes. The video uploaded in August 2020 has more than 612 million views to this date. The post is liked by almost 50 million people and has 1,7 million comments.

How much does Bella Poarch make a year? Net worth!

As of 2021, Bella Poarch's estimated net worth is established to be $1,5 million.

Bella is, in fact, at the start of her career, so there is not much information given about her incomes. Her primary sources of income are coming from her social platforms, partnerships and own projects. Her approximate salary for 2020 from TikTok only is estimated to be $430,000 in that year.