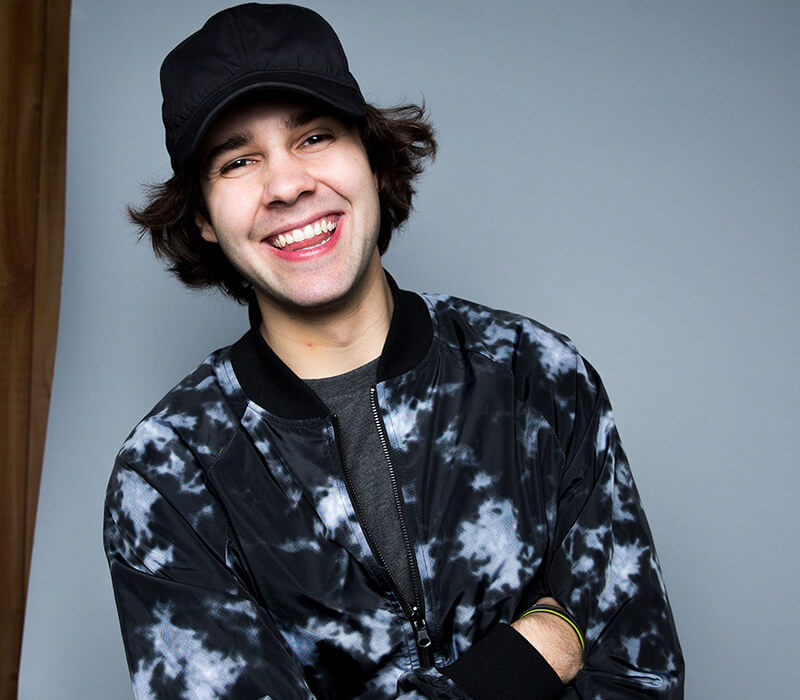 Who is David Dobrik?

David’s full name is David Julián Dobrik, and he was born on July 23rd, 1993. David is an American YouTuber and vlogger born in Slovakia who currently lives in Los Angeles, California.

David started his career on a platform called Vine, which is no longer active. After Vine shut down, David moved to YouTube. All of David’s videos have precisely the same length, four minutes and twenty seconds. He wanted to stop his vlogging career after posting his 420th vlog but decided to continue with this promising career.

Some of David’s famous videos include crazy science experiments in his own backyard.

David dated an internet celebrity Liza Koshy, but they broke up in early 2018.

David Dobrik is also known for founding The Vlog Squad. This popular YouTube ensemble features David Dobrik as their leader and a circle of his close friends creating various vlogs and other goofy videos.

Dobrik’s channel was the fifth-most viewed channel in 2016. As of 2021, David Dobrik accumulated over 19 million subscribers and almost 9 billion views.

The career of David Dobrik

David Dobrik started his career on Vine and uploaded his first video in 2013. David collaborated with other famous Viners such as Zane and Heath, Jason Nash and Gabbie Hanna during his Vine career.

After ending his Vine career, David joined a YouTube group called “Second Class”. Eventually, David created his self-titled YouTube channel and started producing videos on his own. These videos are mostly comedy vlogs based on real-life situations and semi-scripted bits. Most of the other Viners also converted to YouTube, and David kept collaborating with them on his new channel.

David Dobrik created his second channel in August 2016 called “David Dobrik Too,” where he posts challenge videos, blooper reels, and the whole channel has a more straightforward approach to sponsorship deals.

Dobrik only got a massive amount of fans in recent years. He is known for his high-energy videos, often with fellow Viners featuring pranks, cute animals and inside jokes. It is not uncommon for famous celebrities to show up in David’s videos.

David Dobrik got a Diamond play button in December 2018 after he surpassed the 10 million subscribers line.

In December 2019, David Dobrik was mentioned on YouTube Rewind 2019. Being the fifth-most-viewed channel in 2019 with over 2 billion views, it’s no surprise that YouTube chose to feature him in Rewind 2019. The same year, Dobrik’s video with large-scale elephant’s toothpaste placed 1st in Top Viral Video charts on the platform in 2019. This video had 17.5 million likes and over 180 million views.

David Dobrik got invited into The Tonight Show with Jimmy Fallon in his late-night television show. He discussed inspirations for his viral videos and successful YouTube channel and his first interaction with Justin Bieber. After David Dobrik, Martin Short, and Yola appeared on the show, it got ranked as the number one most-social late-night series of the week. This show was discussed so much that it got over 2 million interactions across different social media platforms such as Instagram, Twitter and Facebook. The show was runner up for first place for the late-night rating week of January 20th through 24 in the vital demographic of adults aged 18 to 49 and adults aged 18 to 34. According to Nielsen Media Research, it won the week outright versus its competition in all key adult female demographics. The show also ranked first across all entertainment brands in total and new views for the week, with five videos featuring Dobrik totalling more than 15 million views.

David Dobrik became one of the first 19 people who got TikTok’s $1 billion Creator Fund. Due to “his ability to show what it means to be your authentic self, bring joy and inspiration to people and creatively connect with an audience,” in August 2020, according to Vanessa Pappas, general manager of TikTok US.

David Dobrik eventually started his Twitch career. David peaked at almost 48,000 viewers and gained over 200,000 followers for one stream on his first-ever stream.

David wasn’t born in the United States. In fact, he was born in the heart of Europe, Slovakia. David moved from Košice, Slovakia, when he was only 6 years old. He moved to Ohio and then to Chicago, Illinois. Right now, Dobrik lives in Los Angeles, California.

Dobrik was protected from deportation under DACA as a person who arrived in the United States illegally in his childhood. In September 2021, Dobrik announced that he now owns a green card and could travel outside of the United States.

David Dobrik has three other siblings, Ester, Sara and Toby. In one of his vlogs, David labelled Toby Dobrik as his favourite sibling.

In 2015, David started dating Liza Koshy and dated her for almost three years. She was David’s fellow Vine creator, and they created multiple videos together. David and Liza announced to their fans in June 2018 that they broke up 6 months ago. They both said that the breakup was mutual and didn’t involve any drama.

David Dobrik is a comedian with all of his heart. He even married Lorraine Nash, Jason Nash’s mother. This couple legally married on May 15th 2019, as a comedic bit for one of his vlogs. David and Lorraine decided to end their marriage on June 12th 2019, after one month. Lastly, on November 22nd 2019, David announced that he officially signed divorce papers and divorced Lorraine Nash.

Dobrik created his first Vine on April 3rd, 2013 and reached over 1,5m followers before the platform shut down. David, just like many other Viners, transitioned to Youtube. He collaborated with other famous Viners such as Gabbie Hanna, Josh Peck, Brandon Calvillo and Alex Ernst.

The controversy of David Dobrik

David Dobrik is known for saying some racial slurs in his past and even asking minors for sex.

His friend Trisha Paytas called him out in one of her vlogs and accused him of being a terrible friend and even saying he made her breakup with Jason.

In February 2021, Seth Francois, a former Vlog Squad member, accused Dobrik of sexual assault after being deceived into kissing Jason Nash while blindfolded. Being the only black member of the Vlog Squad, Francois stated he felt “pressured to participate in bits that came off culturally insensitive.” Former Vlog Squad member Nik Keswani accused Dobrik of bullying, saying it was the reason he left the group in 2018.

Dobrik was also accused of abuse by two different people. These severe allegations led to his comment section being flooded with hate comments and people disliking his videos.

In addition, things got even more severe when someone from his vlog squad became accused of rape. On March 16th 2021, Kat Tenbarge at Business Insider reported that while filming a 2018 vlog about group sex, a woman was allegedly raped by then-Vlog Squad member Dom Zeglaitis. While filming, drunk and unable to consent. David remained silent, but not for long. He created a video titled “Let’s talk”, where he shared his opinion and tried to clarify this whole situation. People didn’t take well that he disabled comments and likes for this video.

Dobrik created another video titled “3/22/21”, where he tried to clarify the situation even more. He even got the likes to dislikes ratio in his favour with 4 likes for every 1 dislike. On the other hand, many YouTubers stated that they think David is not really sorry. He created the video only because sponsors started dropping him.

Jeff Wittek, a Vlog squad member, broke his skull and face and needed to undergo major surgery. In April 2021, he released a documentary titled “Don’t try this at home”, clarifying events that led to this accident. David Dobrik was filming his comeback vlog with the Vlog Squad wakeboarding in a shallow lake while being pulled by him using an excavator. Wittek’s documentary included a video showing Corinna Kopf swinging from the line but starting to lose balance. She asked to be released, which David Dobrik hesitated to do. Corrina then accused him of “taking things too far”. When Jeff Wittek got to his turn, David swung him even higher than everyone else and suddenly stopped. The momentum caused Wittek to swing around and crash into the excavator. Jeff Wittek then fell in the lake while still attached to the line.

How much does David Dobrik earn? Net worth!

David Dobrik has a net worth estimated at $25 million. He earns his money from YouTube ad revenue, but that’s far from his primary source of income. David makes money through various deals. He is high up in the highest-paid social media personalities in the world charts, with annual earnings that have recently topped $15 million. With 45 million followers all over social media, we can imagine that David’s sponsorship deals reach astronomical figures.

In August 2020, the real estate site dirt.com reported that David had purchased a home in Sherman Oaks, California, for an ungodly $9.5 million.