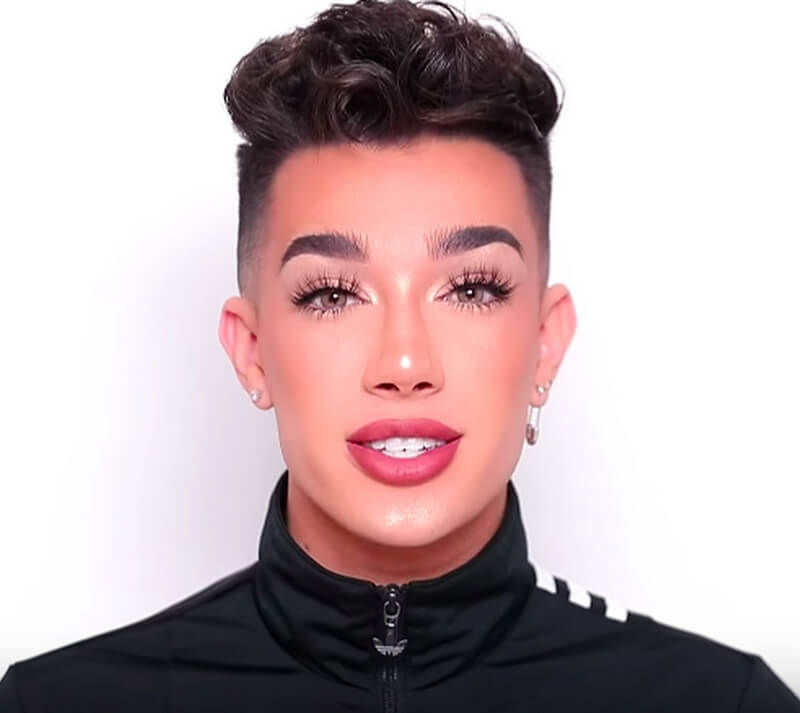 James Charles is an American beauty YouTuber and makeup artist. He started posting makeup tutorials on his YouTube channel while working as a makeup artist in NY. James was one of the first male beauty YouTubers that gone viral. He was discovered by Covergirl, who chose him as the first male brand ambassador in 2016. James did makeup for celebrities like Kylie Jenner, Kim Kardashian, Iggy Azalea and many more.

Charles hosted the YouTube Originals reality competition series called Instant Influencer in 2020. In the same year, he released his own makeup line and eyeshadow palette in collaboration with Morphe Cosmetics. During his years in the internet world, James received various awards for his work. However, his name is often connected with controversy. He had a huge public feud with fellow beauty YouTuber Tati Westbrook in 2019. In early 2021, Charles was accused of sending nude photos and forcing sexting with 17-year-old boys. Because of that accusations, YouTube temporarily demonetized his YouTube channel, and Morphe stopped working with him.

Who is James Charles?

James Charles was born on May 23, 1999, in Bethlehem, New York. James came out as gay to his parents, Skip and Christine Dickinson, when he was 12. They didn't have any problem with that and immediately accepted it. His father is a contractor, and he even helped him to start off his YouTube career. Charles has a younger brother named Ian Jeffrey, who is a model. He is famous on Instagram, mainly thanks to his brother and his modelling career. Ian has more than 1,5 million followers on this platform.

James graduated in 2017 from Bethlehem Central High School. He is a strong personality, as he was bullied at school, and he stayed big and simply ignored it. Charles started working as an amateur hairstylist and soon switched to doing makeup. His makeup experience began when a friend asked him to do her makeup for a school dance. After he learnt how to apply makeup, he fell in love with it and soon started his professional career as a makeup artist. His father helped him to change their home basement into a makeup studio.

Charles started his YouTube career in 2015 when he created his YouTube channel and began posting makeup tutorials. His videos were popular due to his personality and talent in makeup. His first massive increase of fame was in 2016, when he posted a tweet that went viral. It was a photo of him retaking his senior portrait with full makeup on. Charles signed an exclusive contract with CoverGirl in October 2016, and he became the ambassador for the brand. He was actually the first-ever male ambassador of CoverGirl.

In November 2018, James started a clothing line called Sister Apparel that includes a sports bra, gym leggings, underwear, hoodies, t-shirts, trousers and many more. At the same time, he launched a makeup collection named the Sistercollection, which was made in collaboration with Morphe Cosmetics.

In March 2019, James Charles appeared in a music video, "Sally Walker", by Australian rapper Iggy Azalea. He even did her makeup look for this single. After a huge feud with Tati Westbrook later that year, everything got complicated for James Charles. He lost 1 million subscribers in one day. He cancelled the planning Sisters Tour throughout the US, lost many sponsorship deals, etc.

James hosted on his YouTube channel the first season of the YouTube Original series called "Instant Influencer" in 2020. The show purpose was to find the next beauty influencer. The series was an immediate success, James won the award Show Of The Year at the 10th Streamy Awards for his work on this project. However, YouTube didn't want him to host the second season because of James Charles accusations of sexting with 17-year-old boys.

The name James Charles is often connected with controversy. The first big controversy happened in 2019 and is known as the Tati Westbrook feud. Tati is a big beauty YouTuber with more than 8,8 million subscribers on her YouTube channel. She uploaded a 43-minute-long video named BYE SISTER. The video was all about James Charles, Tati accused him of disloyalty and attempting to seduce a heterosexual man. YouTuber Jeffree Star and singer Zara Larsson supported Tati's video and confirmed her claims. After this cause, James Charles became the first YouTuber to lose 1 million subscribers in one day.

Charles tried to apologize in an 8-minute video, but this video was a huge disaster and became one of the most disliked videos on the platform before it was deleted. His second attempt for an apology video titled No More Lies has 41 minutes. This video helped him regain some support back. Tati Westbrook shocked everyone when she deleted the video and posted a new video in 2020. In this video, she accused Jeffree Star and Shane Dawson of manipulating her into making the original video BYE SISTER. This whole cause showed how significant toxicity and hate is in YouTube's beauty community.

The worst cause with James Charles happened in early 2021. Charles was accused by several 15 to 17-year-old boys of sending unsolicited nude photos. James was also accused of forcing them into sexting with him. Sexting is the practice of sending sexually explicit images or messages via phone. Charles posted a video on April 1, 2021, titled holding myself accountable. He admitted sending explicit messages to two boys under the age of 18, but he stated he didn't know they were underage at the time. He apologized for his unacceptable behaviour. This event is still being solved at the moment. As a result, James Charles lost a lot of support, many brands stopped working with him. His most significant collaboration with Morphe Cosmetics ended, and YouTube temporarily demonetized Charles's channel.

How many subscribers does James Charles have?

James is a big influencer on Instagram as well, his account is followed by more than 26,2 million people.

How much does James Charles make a year? Net worth!

James Charles is going through a difficult period in his life. If we look at 2020, his estimated net worth was established to be around $22 million.

However, no one can say how it is now, in 2021, after all the trouble. Back in time, James Charles was one of the highest-paid YouTube stars in the world. After the cause when he was accused of sexting with underage boys, YouTube temporarily demonetized his videos, and huge brands stopped working with him. His YouTube, sponsorship deals and especially his makeup line with Morphe Cosmetics were his primary sources of income! He made almost $5 million per year from the advertisements in YouTube videos, and Morphe contributed even more to his earnings! Charles is still making his merch and clothing line Sisters Apparel, but he is definitely losing millions this year.

The Most Viewed James Charles Videos

James Charles won all of these awards: