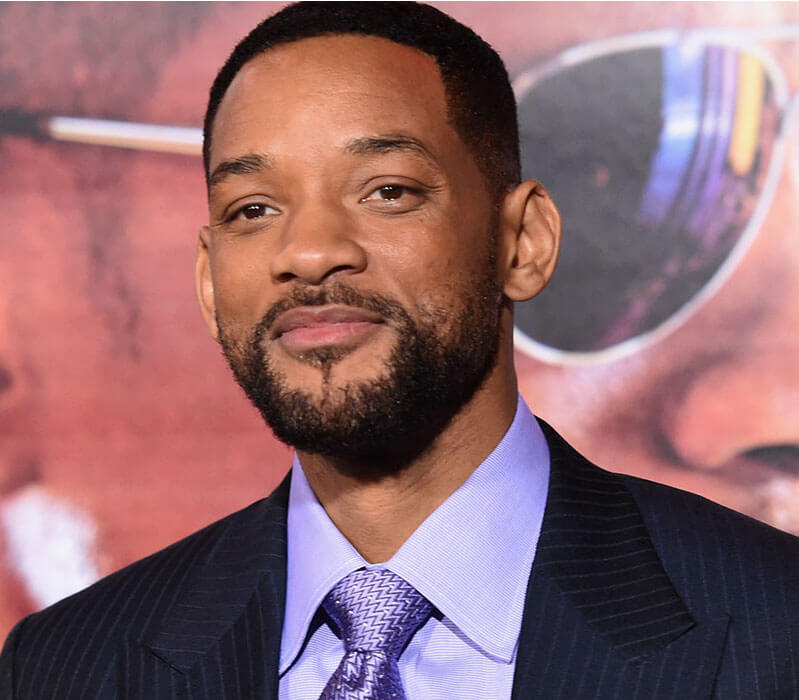 Who is Will Smith?

Willard Carroll Smith II was born on 25th September 1968. He is an American actor, film producer and rapper. Will has been nominated for two Academy Awards and five Golden Globe Awards and has won four Grammy Awards throughout his career.

In April 2007, Newsweek covered Will Smith as “the most powerful actor in Hollywood”. In 2013, Will Smith was named the most bankable star in the world by Forbes. Majority of movies where Will has a leading role accumulated over $100 million, some even more than $500 million in global box office receipts. As of 2016, Will’s films amassed over $7.5 billion at the worldwide box office.

For his roles as Chris Gardner in The Pursuit of Happyness (2006) and Muhammad Ali in Ali (2001), Smith received Academy Award nominations for Best Actor.

Personal life of Will Smith

Will Smith was born on 25th September 1968 in Philadelphia, Pennsylvania. His mother, Caroline, was a Philadelphia school board administrator. Will’s father, Willard Carroll Smith Sr., was a US Air Force veteran and refrigeration engineer.

Will was raised as a Baptist in West Philadelphia’s Wynnefield neighbourhood with his three younger siblings. He has two younger siblings, twins Harry and Ellen and one older sister Pamela. Will’s parents separated while he was 13 years old in 1981 but divorced in early 2000.

Will attended a private Catholic elementary school in Philadelphia during his early years, Our Lady of Lourdes. After that, Will went to Overbrook High School. Will had a promising school career if he wanted. Still, Will turned down a scholarship offer from the Massachusetts Institute of Technology (MIT). Instead, he wanted to rap.

Will Smith married Sheree Zampino in 1992. They had one son Willard Carroll “Trey” Smith III born on 11th November 1992. His son appeared in two episodes of the sitcom All of Us, the David Blaine: Real or Magic TV special and on The Oprah Winfrey Show. Will and Sheree divorced in 1995.

In 1997, Will Smith married actress Jada Koren Pinkett. When Jada auditioned for Will’s girlfriend in The Fresh Prince of Bel-Air, the two met together. They entered the movie industry together with joint production company Overbrook Entertainment and Westbrook Inc. The couple has two children, Jaden Christopher Syre Smith, born on 8th July 1998, and Willow Camille Reign Smith, born on 31st October 2000. Jaden co-starred in The Pursuit of Happyness and After Earth while Willow appeared as Will’s daughter in I Am Legend.

The career of Will Smith

We already know Will Smith didn’t go to college because he decided to rap. He partnered as Fresh Prince with his childhood friend DJ Jazzy Jeff to make a name for themselves. They broke through in 1988 with the single “Parents Just Don’t Understand”. Both their breakthrough hit and “Summertime” received a Grammy Award.

Will Smith spent money freely between 1988 and 1989 until the Internal Revenue Service eventually assessed a $2.8 million tax debt against him. Most people don’t know this, but Will Smith was actually broke before his first debut on TV screens.

In 1990, NBC television offered to build a sitcom “The Fresh Prince of Bel-Air” around him. Will’s popularity rose dramatically, and this sitcom ran for 6 seasons before it ended in 1996.

During his “Fresh Prince” years, Will appeared in some significant roles, such as Six Degrees of Separation in 1993 and, more importantly, Bad Boys 1995. This role next to Martin Lawrence grossed $141.4 million worldwide. However, it had some mixed critical reviews.

In 1996, Will Smith appeared in Roland Emmerich’s Independence Day in the leading role. The film was a massive blockbuster, becoming the second highest-grossing film in history.

In 1997, Will got one of his arguably most successful roles. Will starred in “Men in Black” as Agent J alongside Tommy Lee Jones. This movie was a massive success that grossed nearly $600 million against a $90 million budget. Reviews weren’t mixed this time, and everyone praised the leading actor’s performances and the movie’s humour.

In 2003, Will Smith returned with Bad Boys II, the sequel to the 1995 film Bad Boys. It received mostly negative reviews, although it still grossed $270 million worldwide, proving as a successful franchise.

In 2004, Will dipped his toes in animated movies when he voiced the leading character in “Shark Tale”. The same year, he played the leading role in a successful film, “I Robot”, despite mixed reviews.

After 4 years of not having any major starring roles, Will Smith returned in 2012 with Men in Black 3, taking cinemas by storm. Men in Black 3 was released ten years after Men in Black II and grossed over $624 million worldwide, making it the most successful movie in the series. However, Will announced that three is enough for him, and he doesn’t plan to cooperate with the franchise anymore.

In 2016, Will Smith played in a superhero film based on the DC Comics supervillain team of the same name. His character Deadshot joined other villains on a suicide mission in the movie “Suicide Squad”.

In 2019, Will portrayed Genie in a live adaptation of Disney’s Aladdin, directed by Guy Ritchie. He also participated in the soundtracks by recording singles “Prince Ali”, “Friends Like Me”, and “Arabian Nights”. It was so successful that it surpassed Will’s most successful movie Independence Day and grossed over $1 billion worldwide.

On 19th June 2021, Will Smith announced the title and covered for his own memoir “Will”. This book, written by Mark Manson got published on 9th November 2021. Later, Will and his Westbrook Studios company signed a deal with National Geographic. He embarked on a tour to promote his book in Autumn 2021, with stops in Brooklyn, Chicago, London, Los Angeles and Philadelphia.

Social media of Will Smith

Will Smith is one of the most prominent social media personalities when it comes to Hollywood stars. His self-titled YouTube channel has almost 10 million subscribers. Most of his content consists of fitness videos, family vlogs and reviews of his old shows.

Will has nearly 60 million followers on Instagram and regularly posts about his adventures, showcases his movies or just pictures from the gym.

His most expansive social media reach is on TikTok, where he has over 65 million followers and 415 million likes. Will regularly posts funny sketches from his adventures, often including famous personalities and his family. Sometimes, he even pranks one of his friends or even himself.

During the pandemic quarantine, Will posted a video about how he doesn’t even remember using gym equipment and proceeds to use it unconventionally. Will used the leg extension machine to do upright rows, slid backwards on a rower and found a piece of equipment to swing on.

Will Smith is nowhere near close to the biggest TikTok star, Charli D’Amelio’s 122m followers but was still able to surpass Dixie D’Amelio and other great TikTok names.

Will’s defenders stated that he’s super talented and purely having fun on top of spending his own money paying a team of editors. Others think Will’s videos might actually be sponsored by some of his film projects.

Whatever is true, there is nothing wrong either if it’s financed by studios or from Will’s pocket. After all, the more social media fame Will has, the better his movies sell.

Will got challenged by a YouTube channel, Yes Theory, to bungee jumping. He called their challenge and jumped from a helicopter in Victoria Falls for his 50th birthday.

How much does Will Smith earn? Net worth!

Will Smith is a film producer, rapper, social media personality but mostly an actor. Even though he has a massive amount of followers on TikTok and Instagram, it’s nowhere near his acting salaries.

Will has an estimated net worth of roughly $350 million. His average yearly salary is $40 million, and some years go as high as $80 million. At the peak of his career in the 2000s, Will earned between $20 and $30 million per movie. Between June 2019 and June 2020, Will earned $45 million from his various endeavours, primarily film salaries.

Before the start of his debut TV show “Fresh Prince of Bel-Air”, Will was actually broke. The IRS took 70% of his paycheck for the first three seasons.

Right now, Will is one of the wealthiest Hollywood stars and earned 20 million for the 2017 Netflix movie “Bright” and $35 million for its sequel.

Will’s most enormous confirmed salary came in 2013. He earned $20 million in upfront salary and $80 million in backend points from Men In Black 3 thanks to his 10% cut of the gross. He reportedly also had 20% of the gross of Pursuit of Happyness, Bad Boys 2 and Hancock.

Interesting facts about Will Smith