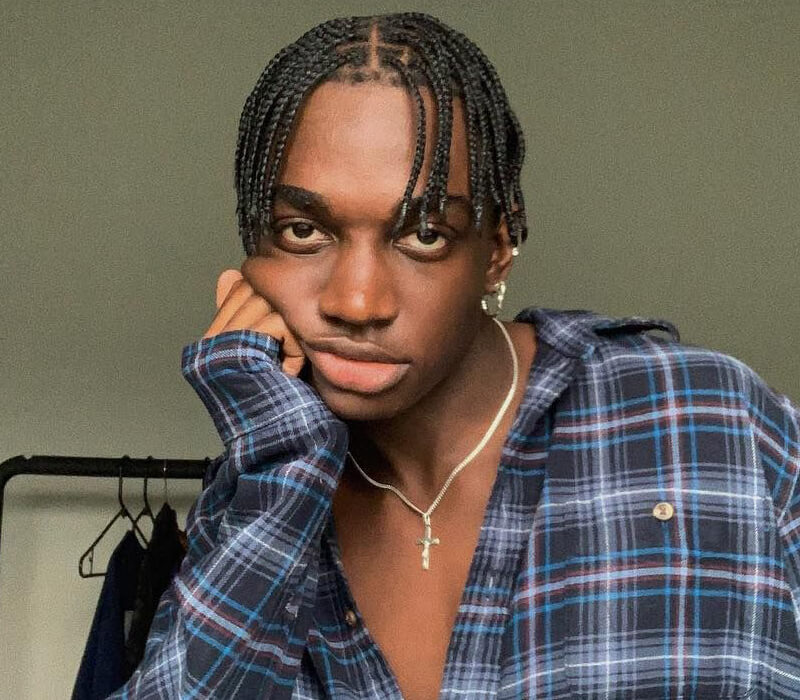 Who is Rickey Thompson?

Rickey rose to fame on Vine before he moved to YouTube, Instagram, Twitter and later even TikTok. Rickey is one half of the podcast “We Said What We Said”. He collaborated with significant fashion companies such as Calvin Klein. He even got interviewed by Teen Vogue and New York Times.

Rickey Thompson was born on February 6th, 1996, in Raleigh, North Carolina. He has one younger sister Karson. His sister appeared in multiple Vines where Rickey and Karson got into a fight.

You might think otherwise, but Rickey claims he is a very shy person and was even shyer back in school. He attended Millbrook high school, where he got bullied frequently. After that, Rickey came home and openly talked about his experiences on camera. He claims those videos helped him get through high school. Rickey shared that bullies from his high school are trying to reach out to him, but he mostly leans toward the block button.

After High School, Rickey decided to pave his own path and move to Los Angeles instead of enrolling in a college. He grew an interest in fashion and walked for many significant fashion designers, such as Alexander Wang in her “Collection 2” at New York Fashion Week in 2018.

The same year, Rickey described his style as “Very ’90s, early 2000’s type of look, very baggy but also fitted at the top” and mentioned his inspirations Dennis Rodman, Brad Pitt “From back in the day,” and boy bands like NSYNC.

His bedroom walls are filled with 90’s pop star and girl groups posters. Billie Eilish and Ariana Grande, who are Rickey’s inspirations, have noticed his impressive decorations and even followed him on Instagram.

Rickey stated that he had many female friends back in high school but never felt attracted to them. Later in 2016, Rickey finally gathered enough courage to publicly come out on Twitter and his “most difficult” video on YouTube called “I’m out, and I’m Proud”.

Rickey maintains only a small circle of friends and claims he got rid of many fake friends. With that much fame, it’s hard to see who is there for you and who just wants to use you for your popularity. Rickey shared he is pretty nervous to date and takes his time in the dating world. “I feel like love will happen when it happens.”

The Career of Rickey Thompson

Rickey rose to fame through his Vine videos and amassed over 2.5 million followers before the platform shut down in 2016. Vine was a platform where you could post short 6-seconds videos. He was well established on the platform, proceeded to Instagram and even started a YouTube channel on his fans’ demand in 2013. His first ever Vine was posted on August 8th, 2013, called “Catfishing on insta...smh.”

Ultimately, Rickey was doing good all by himself, but it all changed overnight when one famous celebrity shared his video. Rickey often posted hilarious comedy skits, which caught the eye of Kylie Jenner. He shared at the People’s Choice Awards to TooFab, “She posted me, and I was like, ‘Oh my God, I made it!’ Seemingly overnight, I became “The most popular kid in school.” Even those who once bullied him wanted to be Rickey’s new best friend.

After moving to Los Angeles, Rickey grew a passion for the fashion world. In 2018 Rickey got himself his first-ever walk for designer Alexander Wang for her “Collection 2” at New York Fashion Week 2018.

In October 2019, Rickey announced on Instagram “A dream come true” for a modelling gig. Rickey realized how great things just happened when he got himself a job for Calvin Klein. It got even better when Calvin Klein made Rickey his own #MYCALVINS promo video.

Rickey got another modelling job for Coach. This brand is close to his heart because his mom, grandma and aunt all loved Coach bags. He stated that anytime he shoots with them, it’s so much fun. In December 2020, Rickey was featured modelling the Swinger Bag. This bag now sells on the Coach website for $275.

From 2016 to 2018, Rickey landed his first acting job in the YouTube series “Foursome”. Rickey played Dakota, the gay best friend who is more than confident in his own sexuality. Foursome is a four-season YouTube Red Premium series. It’s about teenagers with different personalities that help each other navigate the emotional rollercoaster called high school. Rickey shared that this job helped him realize his long-term goal of becoming an actor.

Maybe you’ve heard about a game called What Do You Meme. If not, it’s basically a family-friendly version of “Cards Against Humanity”. If you still don’t know, in simplicity, this game has two sets of cards, and you are trying to create the most hilarious combination. Well, this game has a Rickey Thompson expansion! Over 50 cards with Rickey’s photos and themed captions.

Sounds like Rickey is busy enough, don’t you think? Wrong. In September 2020, Rickey launched a Spotify podcast, “We Said What We Said”, with his close friend Denzel Dion. This show is described as “Bold advice, hot takes, and risque storytelling.” These long time best friends discuss topics from pop culture to music and friendship, relationships to all of the drama.

Rickey Thompson has over 5.4 million followers on Instagram. He mostly posts videos and photos of his daily life, inspirational content or dancing. Thanks to this, Rickey became the iconic hype man. Some videos even include close-up selfies with a judgmental or bragging monologue. Needless to say, not everyone could pull off such a stunt and would get hated for it. Not Rickey. His fans love it, and it almost became his signature move.

When asked about his inspiration, Rickey shared it is different problems from his friends or what the world is going through that he is just trying to make funny.

Rickey stated that there is a lack of realness on Instagram. That is why he is so glad that he can be himself or when he sees his followers embracing their uniqueness, just like him.

Rickey Thompson YouTube channel has over 1.2 million subscribers and almost 60 million views. Rickey’s content is relatable, and he even revealed he films all of his hilarious videos and ranting monologues on his phone. In fact, he balances his phone on the windowsill of his bedroom. The description of this channel is “Hello everyone and welcome to my channel!!! Get ready for vlogs, storytimes, rants, lookbooks etc.....THIS CHANNEL WILL HAVE EVERYTHING!!!” and needless to say, he delivers.

His videos are full of energy, loud and vibrant. Rickey shared he can shoot a rant video in one go and doesn’t have any script.

Some of his amazing videos are “Slang Words with Rickey”, “Embarrassing Moments”, and “I Pooped my Pants”. He also took part in popular challenges such as “Would You Rather Challenge”, “What is in My Hand”, and “Whisper Challenge”.

Rickey’s videos are open and honest, including his own problems. On his channel, Rickey posted his struggle with relationships, acne, and when he was bullied for his sexuality in high school. He publicly came out on Twitter in 2016 and created his “One of the most difficult videos” to shoot, called “I’m out, and I’m Proud”.

Rickey has 3 million followers and over 30 million likes on Tik Tok. He even claims he is obsessed with it, but it wasn’t always like that. In an interview with Who What Wear, Rickey shared, “I was like, this is for the children. But then, when we went into quarantine, I was like, okay, let me just try this out, and now I’m obsessed. I’m on the app 24/7.”

Rickey posts hilarious videos and joins on the newest Tik Tok trends. He is always trying to make them unique and love the way it connects people worldwide.

How much does Rickey Thompson earn? Net worth!

Rickey Thompson has an estimated net worth between $1 and $2 million. Most of his earnings come from his modelling career and his own projects. Rickey got himself a partnership with American Eagle, Coach and The Luggage Company. He collaborated with Calvin Klein in the #MyCalvinsIRL campaign. Even during the pandemic, Rickey partnered with AXE to host a virtual prom in 2020. In addition to his social media revenue, Rickey started a project with his friend Denzel Dion and landed a deal with Spotify to launch their own podcast show.