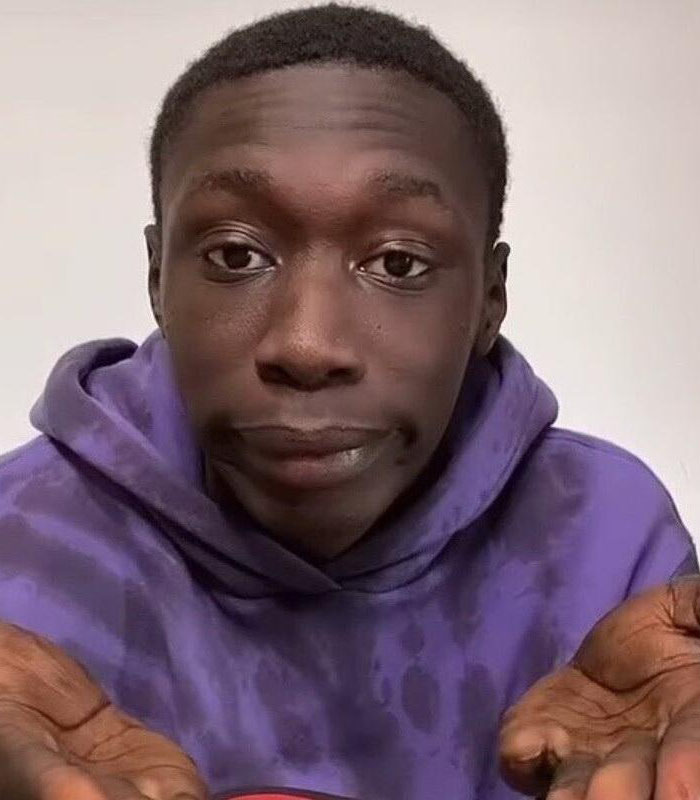 Who is Khaby Lame?

Khababe Lame, known under his online pseudonym Khaby Lame was born on 9th March 2000. Khaby is 2nd largest TikToker on the platform, shortly behind Charli D’Amelio and is expected to surpass her in the near future.

Lame described himself as a soccer fanatic, with his favourite team being Juventus F.C. of Turin, Italy. He also named Eddie Murphy and Will Smith as two of his biggest influences. He aspires to be at their level of comedy one day.

Khaby was born in Senegal, Africa, on 9th March 2000. Khaby with his family moved into Chivasso, Italy, when he was only one year old.

Before his massive TikTok success, Khaby worked as a CNC machine operator at a factory near Turin. During the Covid-19 pandemic, he lost his job in March 2020.

In October 2020, Khaby announced his engagement to Zaira Nucci. Although Khaby has lived in Italy since his early years, he doesn’t possess Italian citizenship or a passport. By his words, he doesn’t need a piece of paper to consider himself Italian.

The career of Khaby Lame

After getting fired from his job as a CNC machine operator during COVID-19, Khaby started posting one of his first TikToks. He first tried to rise to fame the “regular” way. His first videos included him dancing and watching video games and were primarily filmed in Italian with Italian subtitles. These early videos include a mix of dance parodies, such as doing the “woah” while soaping his hands, and random meme skits, such as pretending to DJ with chess pieces.

What really made Khabys popularity snowball was his reactions to popular “life hack” TikToks. Khaby performs the same task, but simple, without even saying anything making the life hack seem ridiculous.

What separates Khaby from other TikTokers is his content. No one has done anything like him before. Khaby often just starts his video with him gazing into the camera with odd expressions and provides simple answers for complex tasks requiring “life hacks”.

In an interview with The New York Times, Khaby shared, “It’s my face and my facial expressions that make people laugh”. He thinks this provides a global language, and any one of any nationality can enjoy his TikToks.

One video shows a person grasping a cherry and removing its stem with an elaborate clipping device. The scene then shifts to Lame sitting on a train, holding two cherries in front of him. He grabs one, turns to face the camera, and yanks on the stem. He pops the cherry into his mouth while slowly shaking his head as if to say, “How easy was that?”

Another video with 50 million views begins with a fast-food employee dashing into a car to deliver a heaping tray of drinks and meals. The man slams into the window, spilling the platter all over the place. The scene then cuts to Lame, who has a few fries stuck to his cheeks and is shaking his head at the camera with a stony expression on his face. He swipes away the fries, glares, and then slowly scrolls up the window.

One more thing that separates Khaby from other top influencers is that he is trying to avoid cliches. Most of the top influencers use high-quality cameras, enticing music, and meticulous lighting. His videos are frequently calm and alluringly realistic. He doesn’t bother optimising the lighting, editing his videos or optimising the lighting at all, lending an air of authenticity.

Khabys popularity has grown to a point where fans create compilations “Funniest Khaby Lame Compilation” or “Khaby Lame BEST TikToks”, reaching over 10 million views on YouTube. He has over 60 million followers on Instagram. There is also a subreddit dedicated to Khaby Lame with more than 1,000 members.

Khaby is also the 2nd most followed TikToker on the platform, with less than 8 million followers behind the leading influencer Charli D’Amelio. In fact, Khaby gains more followers than Charli, so he is expected to surpass her and take the 1st most-followed account on TikTok spot.

Colombian singer J Balvin announced the release of his new song “In da Guetto” on Instagram. The song’s cover artist is none other than TikToker Khaby Lame. In less than 24 hours, the image received over a million “likes” and thousands of comments.

How much does Khaby Lame earn? Net worth!

Khaby Lame has an estimated net worth between $1 and $2 million. Most of his earnings come from social media.

Khaby has a YouTube channel where he posts YouTube shorts with more than 1 million followers. He also collaborated with names such as MrBeast.

Khaby’s most dominant social media is TikTok. As of 2021, Khaby has nearly 124 million followers and almost 2 billion likes. He is known for posting videos that no one else does. His content is relatable and provides a global language so everyone can enjoy it.

According to some sites, TikTok stars are monetised once they reach a certain number of followers. Khaby makes anywhere between $50,000 and $90,000 per social media post.