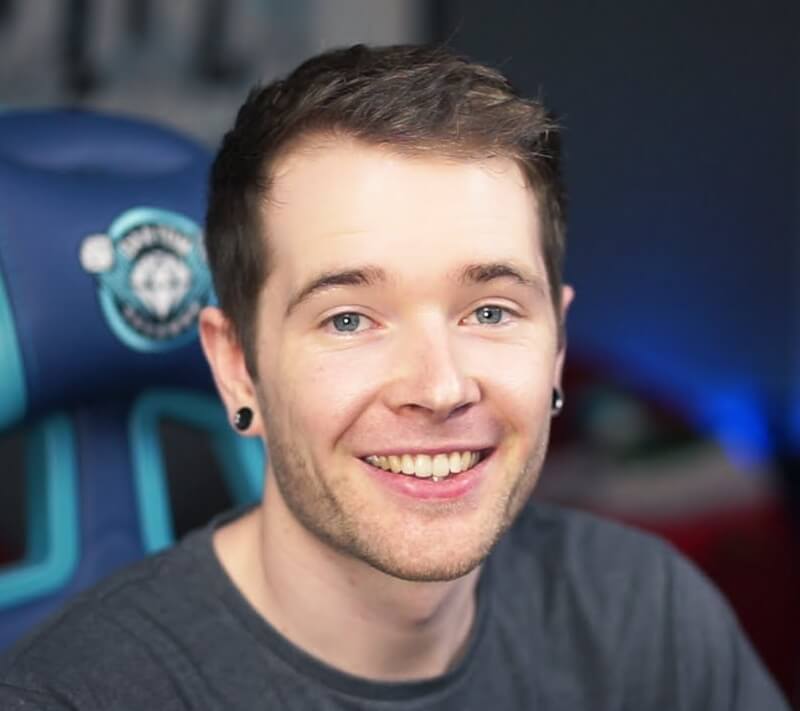 Daniel Robert Middleton is known on the internet under the pseudonym DanTDM or simply Dan. Dan is an English YouTuber, gamer, author, musician and actor. He is known for his gaming series and video game commentaries. The most popular games that show up on his channel are Minecraft, Roblox, Fortnite, Among Us, Sonic, Super Mario and Pokemon. DanTDM’S Custom Mod Adventures and Minecraft Hardcore series are the most viewed and loved series on his YouTube channel.

DanTDM has been listed among the Top YouTubers in the United Kingdom, his channel is currently #5 in the UK. He has more than 25,3 million subscribers and 18 billion total views on his main channel. Dan has another channel called MoreTDM, where he uploaded videos about his daily life, vlogs etc. However, this channel is more than 4 years inactive. DanTDM has earned Kids Choice awards as well as a Guinness World Record for his gaming.

Daniel was born on November 8 1991, in the English town Aldershot. He has a younger brother, who was his best friend during childhood because they moved around a lot, and they both love video games. His brother first introduced him to Minecraft, and they started a band together in high school. When he was a child, his parents divorced. Dan attended the University of Northampton, where he studied music production. While studying at university, Daniel created a YouTube channel in 2009 dedicated to Counter-Strike: Global Offensive.

Dan is married to Jemma Middleton, their wedding took place on March 17, 2013. They even used to create videos together. This married couple love dogs, they own three pugs: Ellie, Darcie, and Peggy. On January 9, 2020, Dan and Jemma announced that their son, Asher, was born on January 5, 2020. Husband and wife decided not to show their son face on camera due to privacy reasons.

His real YouTube career began in 2012 when Dan created a gaming channel called TheDiamondMinecart. He joined YouTube on July 14, 2012. The audience of this gaming channel consists mainly of children aged 6-14. In the early phase, there were some issues about faking his channel, so he changed his name to DanTDM on December 20, 2016.

Dan produces videos out of his home studio in Wellingborough. He is known for his daily reviews, and several Let’s Play series, including The Diamond Dimensions, a mod pack put together by Dan himself, and Minecraft Xbox One, where he attempted to build a giant kingdom in Survival mode. He also made vlogs that he uploaded on his second channel, MoreTDM, the channel is currently more than 4 years inactive.

In October 2016, Middleton released a graphic novel called Trayaurus and the Enchanted Crystal. This novel features characters that appeared in his videos. The book was a success, as it was listed at the top of bestselling books in the world for three weeks. The book also reached the number one spot on The New York Times bestseller list for hardcover graphic books in Japan and stayed in that spot for eleven weeks. He was a featured guest at the Cheltenham Literature Festival and went on a book tour that took place in different parts of the UK and New York City. In 2017, he went on a tour through the United States and Australia. He started in Sydney, Australia, followed by half a year in the United States. It was then followed by a short Australia tour, where his final show took place at the Sydney Opera House.

In 2017, web series called DanTDM Creates a Big Scene was released. Dan starred himself, and the series featured other social media entertainers and actors. The premiere of the series was on April 7 2017, exclusively for YouTube Red. The show ran for six episodes and followed DanTDM and his group of animated friends as they battle to keep their live show on the road. Each episode catches their behind-the-scenes exploits as they learn skills, face impossible odds, and overcome challenges.

In 2019, The Sunday Times listed DanTDM in UK’s Top 100 Influencer List, and he reached position number 41. His online video channel is focused primarily on the game Minecraft. However, nowadays, he plays random video games, does community Discord challenges and reaction videos. His most known series Minecraft Hardcore was a substantial part of his channel until April 2021, when he accidentally died in that episode. And when you die in Minecraft Hardcore, you are simply done, and you have to start again! Dan later uploaded a video called Thank You, Pewdiepie X, where we can see PewDiePie himself keeping a silent minute for DanTDM’s death in Minecraft and Dan’s reaction.

How many subscribers does DanTDM have?

DanTDM is one of the most subscribed and viewed YouTubers from the United Kingdom, he is currently having more than 25,3 million subscribers and 18 billion total video views.

How much does DanTDM make a year? Net worth!

DanTDM’s estimated net worth is established to be $75 million.

Daniel is consistently one of the highest-earning personalities on YouTube. In 2018, Dan earned $18,5 million from his various revenues, including a merchandise line featuring hoodies, backpacks, hats, and much more. In 2019 he earned $12 million.

If we look at his YouTube only, his channel generates an average of 3 million video views every single day. On average, he makes around $25,000 every day, which means he makes approximately $9 million a year. He is one of the highest-earning Minecraft YouTubers.

The Most Viewed DanTDM Videos