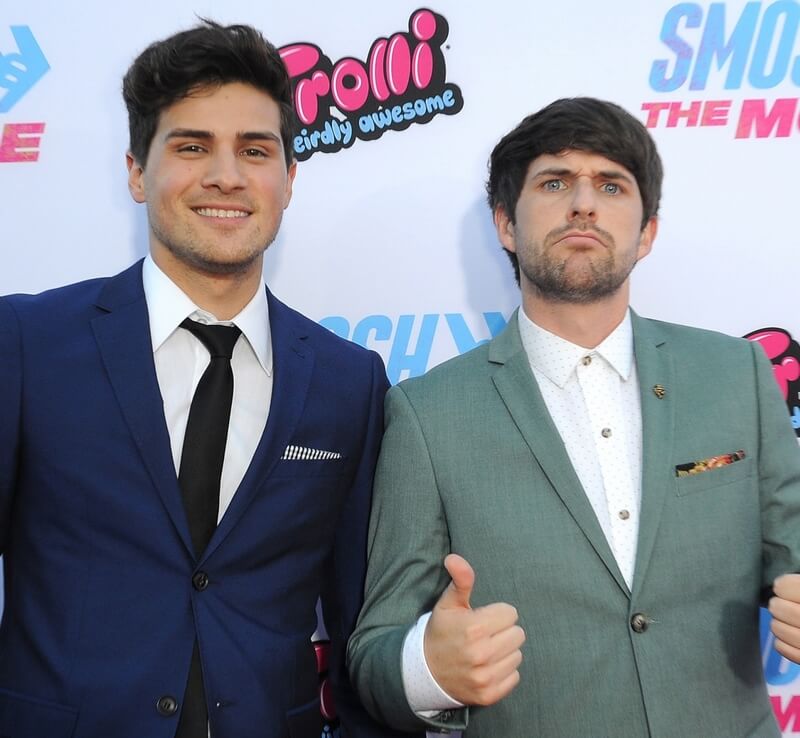 Smosh is a sketch comedy YouTube channel from America. The channel originally consisted of Anthony Padilla and Ian Hecox. They were an iconic duo and childhood friends. However, on June 14, 2017, Anthony announced he had left Smosh in a video with Ian. He admitted he is no longer enjoying working on it. They began their YouTube career in the autumn of 2005 and quickly became one of the biggest YouTube channels on the platform. They expanded their content into multiple channels, including a channel focused on video gaming content called Smosh Games, a Spanish channel called ElSmosh and a variety channel Smosh Pit. As of June 2021, they have 45,9 million subscribers combined from all the channels and 16,3 billion combined total views.

The sketches include more actors nowadays, the channel cast consists of Ian Hecox, Courtney Miller, Shayne Topp and Damien Haas. They have many recurring members, for example, Keith Leak Jr., Olivia Sui, Noah Grossmann or Kimmy Jimenez. The Smosh company was purchased by Rhett and Link on February 22, 2019, and afterwards, they joined Mythical Entertainment.

Everything started when Anthony Padilla created the website smosh.com in 2002. This web was meant to be the place for different Flash animation. Smosh.com was made 3 years before the YouTube era began, and other creators of that time also uploaded videos to smosh.com. Later, his friend, Ian Hecox, joined the venture. They met in the science class at the age of 11 and became friends. They have a lot in common, the most significant was their comedy talent. In 2005, they joined YouTube and started their joint career.

Anthony Padilla was born on September 16, 1987, in Sacramento, CA. He has two brothers, and his parents broke up when he was just 2 years old. His mother has severe agoraphobia, a type of anxiety disorder in which she fears and avoids places or situations that might cause her to panic and make her feel trapped, helpless or embarrassed. Anthony attended Del Campo High School in Fair Oaks, California, along with Ian. After graduating, they both studied at American River College in Sacramento but dropped out after two years.

Padilla was in a controversial relationship with his ex-girlfriend Kalel Smith in 2013 - 2014. When they had troubles in their relationship, they used the online platform to hurt each other. After the break-up, Anthony was in a relationship with Miel Bredow. They stayed together until 2019. He met his current girlfriend, Mykie. Mykie is a make-up artist and YouTube star, her real name is Lauren Mychal. They have been dating since 2019, and the public is speculating about them getting married soon.

Ian Hecox was born on November 30, 1987, in Sacramento, California. He met Anthony for the first time in 6th grade in a science class. Ian mentioned that he was more of an outsider in high school and was kind of emotional. His mothers' name is Sharon, and she was featured in many Smosh videos. His father, on the other hand, has been seen only twice. Ian suffers from asthma and a slight case of ADHD, Attention Deficit Hyperactivity Disorder. Ian loves running and is often portrayed as childish, happy-go-lucky, irritable and ignorant. He was in a relationship with Melanie Moat for 7 years, from 2007 to 2014. On September 11, 2015, Ian started dating Pamela Horton, model and playmate, but they broke up soon.

When they joined YouTube in 2005, they made several lip-sync videos of theme songs to Mortal Kombat, Power Rangers, and Teenage Mutant Ninja Turtles. Smosh released the video "Pokémon Theme Music Video" on November 28, 2005. This video became much more popular than any of their earlier videos. The video was the most-viewed YouTube video at that time. It held first place until it was taken by Judson Laipply's Evolution of Dance. The video was deleted later for copyright violations. Channel continued to grow up, and eventually, Smosh partnered up with YouTube.

Smosh established their content over the following years. They started making short YouTube skits, such as their annual video series Food Battle and That Damn Neighbor. Due to their success, they became one of the most subscribed channels on YouTube. In 2012, the duo started three new YouTube channels. They created a channel called ElSmosh, where they post their video with Spanish dabbing, and Smosh Games was made for gaming-related content. The last one is the variety channel.

In February 2013, Smosh released a video game for apple products called Super Head Esploder X. In July, they started an Indiegogo campaign for the game Food Battle: The Game. The duo raised $258,777 to hire video game producers to create a game based on their characters and the foods used in their annual Food Battle series. Smosh donated 10% of the funds to three charities in November 2014 and released the game. In February 2014, Smosh released a mobile app to access Smosh videos. In January 2016, the sitcom-dramedy web series Part Timers was launched on the Smosh channel. In each episode, they present a challenge that the team must overcome. The series featured regular Smosh cast members as Grossman, Hecox, Padilla and more.

On June 14, 2017, Anthony announced he had left Smosh. He admitted he is no longer enjoying working on it, misses creative freedom and wants to pursue independent video ventures. Smosh was owned by the company Defy Media, which abruptly announced they were shutting down on November 6, 2018. Hecox said that Smosh is not ending, and they are searching for a new owner. Mythical Entertainment acquired Smosh on February 22, 2019. This led to changes in the Smosh casts and crews.

How many subscribers does Smosh have?

Smosh's main channel, as of today, has over 25,1 million subscribers and 9,8 billion views. The main channel is the original one. However, Smosh created many more channels with different content.

If we combine all their YouTube channels, they have 45,9 million subscribers and 16,3 billion views in total.

How much does Smosh make a year? Net worth!

Smosh's net worth is estimated to be about $10 million. Every year, Smosh earns between $7 and $10 million from their various entertainment venture.

Smosh was acquired by Mythical Entertainment for around $10 million after their parent company Defy abruptly closed.

The Most Viewed Smosh Videos