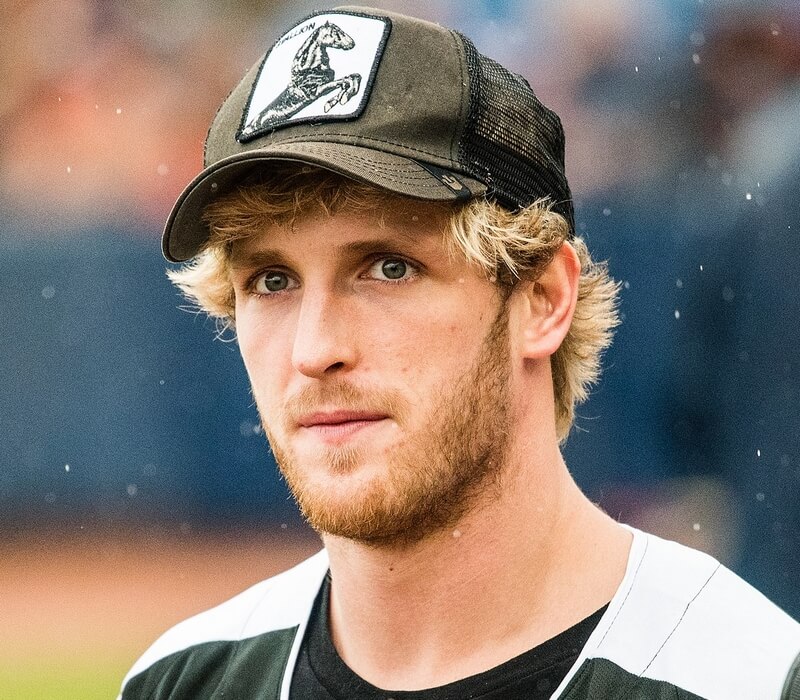 Logan Alexander Paul is an American YouTuber, musician, actor, director, and professional boxer. Logan started his career on Vine along with his younger brother, Jake. After Vine discontinued, he switched to YouTube and started his career there. He created a channel called TheOfficialLoganPaul and later Logan Paul Vlogs channel, which has since become his most subscribed YouTube channel. His acting career includes various television and movie roles, such as roles in films The Thinning, The Thinning: New World Order, Can't Take It Back, or Valley Girl. He even appeared in Law & Order: Special Victims Unit.

Logan tried to expand his content in various ways. For example, he started to work in the music industry when he uploaded the music video "2016" in 2016. Paul took part in an amateur white-collar boxing match with his brother Jake against KSI and his brother. Throughout his career, Paul has become the subject of many controversies due to his behaviour. The most known cause was his trip to Japan in 2017. He filmed a suicide victim in the Aokigahara "suicide forest" and uploaded it to his YouTube channel.

Who is Logan Paul?

Logan was born on April 1, 1995, in Cleveland. However, he moved soon to Westlake, Ohio, where he grew up. Paul has English, Irish, Scottish, Welsh, Jewish and German ancestry. He has a younger brother Jake, who is also an internet personality. Their mother, Pamela Ann Stepnick, worked as a nurse. Their father, Gregory Allan Paul, was a real estate agent and before part of the military. Growing up, Logan, along with his younger brother, loved playing sports, especially football, and going to the woods.

Logan and his brother loved watching YouTuber Smosh, and they say he was their biggest inspiration to begin creating videos. They made a channel called "Zoosh" and started posting short funny videos, their mom was the cameraman. Around this time, Logan's parents divorced, and the Paul brothers were shaken by this event.

When Logan started attending high school, he and Jake stopped making videos and started focusing on wrestling and football. He achieved the ranks of The Plain Dealer's All-Star linebacker on the football team in 2012. Logan qualified for the state-level Ohio High School Athletic Association 2013 Division I Wrestling Individual Championships. In 2013, Jake joined Vine and officially started his internet career.

Paul dated actress Chloe Bennet in 2018, but they broke up in the same year. . In April 2020, he started dating Josephine Canseco. Josie Canseco is an American model and internet personality. They broke up in November 2020, but soon after, they were back together.

Logan Paul first hit fame on the platform Vine starting in 2013, where he uploaded random sketches. Once Vine shut down in 2016, he started focusing on his YouTube and acting career. Logan had created a YouTube channel known as The Official Logan Paul but stopped uploading on this channel in 2017. By April 2014, he had about 150,000 subscribers on his YouTube channel, and it was a massive number at that time.

He started pursuing his acting career and appeared in the film Baywatch. In 2015, Paul appeared in Law & Order: Special Victims Unit and in the Fox TV series Weird Loners. He also starred in two episodes of the Freeform series Stitchers. In 2016, Logan collaborated with YouTube Red and played in the movie The Thinning.

In February 2017, Logan starred on Dwayne Johnsons's YouTube video. Paul wrote the screenplay for an adult comedy, Airplane Mode. The film released in August 2019 after being delayed for almost 2 years. Logan took part in various advertising campaigns, for example, he was part of ads for Hanes, PepsiCo, and HBO.

The most significant case around Logan Paul happened in December 2017. It is known as the suicide forest controversy. Paul uploaded a vlog to his YouTube channel, where he visited Aokigahara forest at the base of Mount Fuji in Japan. This forest is known as the "suicide forest" because many people committed suicide there. The biggest issue about the vlog was Logan showing the recently deceased corpse of a man who died by hanging. Paul and his group had planned to camp in the woods, but after finding the corpse, they decided to notify the police and cancel their plans. The video gained 6,3 million views within one day. The footage was strongly criticized by the public, celebrities and politicians. As a result, Paul removed the video from his YouTube channel, posted a written apology on Twitter and uploaded a subsequent video apology on his YouTube channel. This cause almost ruined Logan Paul's career because many advertisers, such as Google Preferred, removed Logan Paul's channel from their program. He was also cut from his filming roles.

On February 9, 2018, YouTube suspended all advertising on Paul's channel due to his behaviour. He joked about the Tide Pod Challenge, removed a fish from the pond to "give it CPR", tasered two dead rats and many more. He didn't receive any revenue from YouTube, and as a result, he broadcasted live on Twitch for a while. After 3 months, YouTube restored revenue from Paul's channel.

Logan Paul and fellow YouTuber KSI famously hate each other. On August 25, 2018, KSI and Logan held a pay-per-view boxing match that was promoted as "the biggest internet event in history". A rematch took place on November 9, 2019, at the Staples Center in Los Angeles. The first fight was watched by 2.25 million viewers live, with 1 million watching via pay-per-view and another estimated 1.2 million watching illegally via Twitch streams. In the end, 1.3 million purchased the fight via PPV, generating around $13 million in revenue. Logan and KSI each likely earned around $2 million from the match before taxes when all other sources like merchandise are included. For the second fight, they each were guaranteed a minimum of $900,000. Their total earnings for the second fight, broadcasted by boxing company DAZN USA, likely topped $3 million each.

On December 6, 2020, it was announced that Paul would face former five-division champion Floyd Mayweather Jr. in an exhibition bout on February 20, 2021. The fight was postponed to June 6, 2021, and will take place at the Hard Rock Stadium in Miami Gardens, Florida.

How many subscribers does Logan Paul have?

How much does Logan Paul make a year? Net worth!

Logan Paul has an estimated net worth of $19 million.

Paddy Galloway posted a video named How LOGAN PAUL Built His Business Empire in June 2020. In that video, you can find out how much Logan earns. He makes approximately $20 million per year. Logan makes money online in several ways, from YouTube advertisements, merchandising, video sponsors, revenue from his podcasts and songs on Spotify and Apple Music, Maverick Club memberships, and exclusive live events, such as his boxing.

The Most Viewed Logan Paul Videos