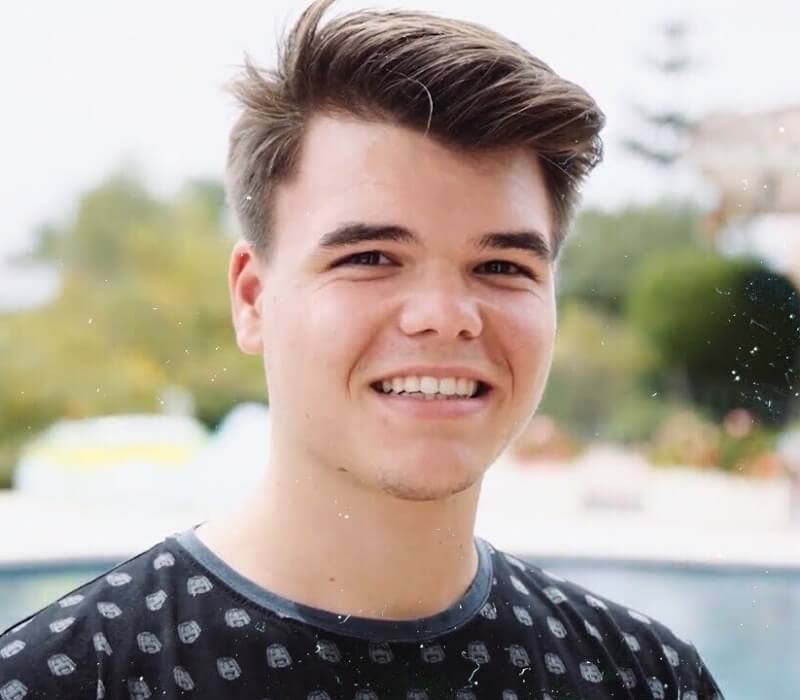 Jelle Van Vucht, known online as Jelly, is YouTuber from the Netherlands. He is known for his gaming videos, vlogs and streams. His most famous series are from the games Grand Theft Auto V, Minecraft, and Fortnite. Jelly is one of the most energic and funny YouTubers on the scene. He also owns a clothing line for which he has acquired quite a name by selling various items to his fans. Van Vucht is a member of Robust alongside Slogo and Crainer.

Jelle was born in the South of the Netherlands in Roermond on October 14 1996. He he has a brother named Koen Van Vucht. Jelly studied in a local private school and later attended an audio-visual course at the Eindhoven University of Technology. After that, however, this YouTube star dropped out to focus on his own businesses.

Jelly met his girlfriend Sanna in September 2014, and they started dating soon. She is YouTuber and Instagram star known under the pseudonym iamSanna. Her youtube channel has more than 6,19 million subscribers, and her Instagram is being followed by 707k people. They currently live in Spain together.

Jelly's first channel is called GTA5Videos, and he uploaded his first video ever in November 2011. This channel was obviously focused mainly on GTA and everything around this game. Everything started in June 2014 when Jelly uploaded the first video on his channel Jelly. Within a very short time, he earned thousands of subscribers, and many people were highly interested in his videos.

In late 2019, Jelly started making videos with Crainer. In December 2019, Jelly announced that Kwebbelkop was replaced by Crainer in Robust. Thus, Crainer became the newest member of Robust. When Crainer joined the group, the trio rose up in subscribers. Also, Jelly met Crainer in January 2020. In March 2020, Dino commented in a Jelly video, and then Jelly hearted the comment and contacted Dino. In May 2020, they both started to record gaming videos and then became great friends.

Later he started his own online stores through which he began to sell various kinds of dress and other items to his fans. Jelle also signed contracts with multiple companies. Jelly is a G FUEL ambassador since May 2019. Van Vucht is very hardworking as he uploads two videos every day. As of today, he uploaded on his main channel 3837 videos in total.

How many subscribers does Jelly have?

Jelly other social media sites are also highly followed as he has more than 1,3 million followers on his Instagram, where his followers can see more of his life.

How much does Jelly make a year? Net worth!

Jelly's net worth is thought to be around $50 million.

His primary source of income is YouTube and revenue from the ads. Jelly uploads two videos every day, and the videos in the channel get an average of 11 million views per day. This generates an estimated revenue of around $88,000 per day from ads that appear in the video. As a result, Jelly earns around $32 million a year.

Jelle sells merchandise to his fans in his online store, and this brings in a considerable amount of income which can also be supplemented by sponsorship deals. On March 17, 2019, Jelly shared a video where he showed his great house worth $6,500,000.

The Most Viewed Jelly Videos