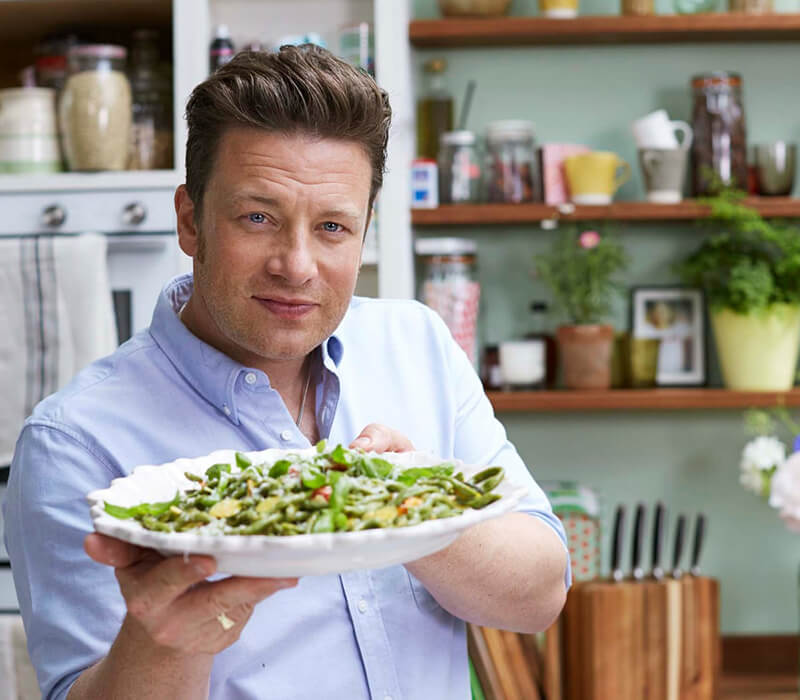 Who is Jamie Oliver?

Jamie Trevor Oliver was born on 27th May 1975 in Clavering, Essex. Jamie is a British chef, cookbook author and restaurateur. Not to be confused with Jamie Oliver, the keyboard player of Welsh band Lostprophets or Jaime Oliver Spaniard boxer.

His cooking skills are well-known for his approachable cuisine by a regular home cook. Jamie opened numerous restaurants, led different television shows and has a highly subscribed YouTube channel.

Jamie was born and raised in Clavering, Essex. He started learning the art of cooking at a very young age. Jamie’s parents Trevor and Sally Oliver, ran a restaurant of their own called The Cricketers. He has one sister Anne-Marie.

Jamie Oliver was educated at Newport Free Grammar School and left the school at the age of 16 with two GCSE qualifications in Art and Geology. After that, Jamie went to Westminster Kingsway College, called Westminster Technical College beforehand. After graduating with City & Guilds National Vocational Qualification (NVQ) in home economics.

Jamie Oliver moved with his family during the summer of 2019 into Spains Hall. They now live in a huge £6,000,000 property. This house is a 16th-century mansion in Finchingfield, Essex. It includes a 70-acre estate, three-bedroom lodge, six-bedroom farmhouse, tennis court, swimming pool and converted stables.

The career of Jamie Oliver

That would be enough for most people, but not for Jamie. He moved to The River Café, Fulham and started working there as a sous-chef. Being amongst the top in his industry, Jamie got noticed by BBC in 1997 and starred in a show “Naked Chef” after making an unscripted appearance in a documentary about the restaurant Christmas at the River Café.

Jamie Oliver started his own campaign in 2005 called “Feed Me Better” to encourage British school kids towards healthier foods and away from junk food. Thanks to that, Jamie won “Most Inspiring Political Figure of 2005” in Channel 4’s annual viewer poll.

Being this famous as Jamie Oliver, you’ll indeed create some controversies and step on people toes.

In 2005, Oliver got into an argument with animal rights groups. Jamie slaughtered a lamb on his TV show without first stunning it. Sean Gifford, the PETA spokesman, said that it was hoped the footage “could turn the more die-hard carnivore into a vegetarian”. Peta stated that it showed the public problems with the methods used within slaughterhouses. British TV regulator Ofcom reported over seven complaints from the public.

Jack Monroe stated that Jamie Oliver’s comments “Support damaging myths that poor people are only poor because they spend their money on the wrong things, rather than being constrained by time, equipment, knowledge or practicalities”. He introduced “cheap” food and encouraged poor people to prepare their own healthy meals. He was criticised for an unrealistic view of poverty in Britain and around the Mediterranean.

Jamie is also not afraid to share his opinion. At the LeWeb conference in London, 2012, Oliver commented on other chefs. Oliver also spoke against Marco Pierre White, who has been overly critical of Jamie Oliver in the past and also about Gordon Ramsay.

His “Feed Me Better” campaign in 2005 also involved some controversy. Giving students an option to eat healthier, what could go wrong, right? This campaign was arguably successful, but many students and parents believed that they shouldn’t be forced towards more nutritious food and should be given a choice.

In 2011, Oliver advocated cooking meals from scratch and using local ingredients. It turned out that Jamie’s Italian sauces in Glasgow were from an industrial park almost 400 miles (640 kilometres) away from Bicester.

That same year, in 2011, Oliver was accused of the lack of food safety protections in his restaurants and illnesses associated with undercooking minced meat that may have been contaminated with E. coli.

His “Big Fish Fight” campaign that he ran with Gordon Ramsay caused another controversy. This campaign was supposed to advertise sustainable seafood. It got criticised for using an endangered fish.

In 2014, Oliver got criticised once again for funding and advertising Woolworths Supermarkets. The reason for this controversy involved his relationship with the supermarket.

“Moreover, in this case, he is not a spectator but effectively a beneficiary of these demands on our farmers. If he disapproves of Woolworths’ ethics, he can withdraw from the campaign and refund his endorsement fee. In the last 12 months, the average vegetable grower has gone from making a small profit to making a loss. In the same 12 months, Mr Oliver’s wealth rose by an estimated £90 million. Now we know how.”

Oliver got into an argument with Minnette Batters in February 2017 after he criticised the Red Tractor Scheme.

Oliver said: “Chickens are bred to grow fast with a high ratio of meat to bone, but this makes them heavy so they can struggle to walk...I think people would be shocked by the reality of what we are buying. I personally wouldn’t feed it to my kids.”

Batters repelled with: “There are a lot of people on tight budgets, and they must not be disadvantaged in all of this. It is about making sure we can provide quality, affordable, safe, traceable food to everybody regardless of budgets, regardless of background.”

Jamie Oliver has been the face of Sainsbury’s supermarket chain since June 2000 and appeared in their multiple advertisements and in-store promotional material. Oliver and J. Sainsbury never shared the exact figure Jamie gets, but over £1 million is estimated every year. Jamie stared in over 60 advertisements by 2004. It didn’t go without controversy. Jamie admitted that he does not use supermarkets, despite having “product placement” in his TV series.

The deal between Oliver and Sainsbury’s ended on Christmas 2011. Jamie criticised Sainsbury’s CEO, Justin King when he slammed the “junk” sold by supermarkets. King hit back, stating: “Dictating to people-or unleashing an expletive-filled tirade-is not the way to get engagement.”

Jamie Oliver also advertised a line of non-stick pans and cookware for Tefal.

In October 2013, Oliver began a partnership with Australian chain Wollsworths supermarkets to collaborate on a series of better nutrition initiatives.

Oliver partnered with another brand called HelloFresh in January 2016. This international meal kit subscription service announced a partnership to incorporate his recipes into the weekly subscription deliveries. Customers started receiving one recipe written by Jamie Oliver with all the exact ingredients and steps for the dish.

Jamie Oliver also collaborated with Tesco and created a series of recipes in September 2018. He participated in the promotion of the company’s food products.

How much does Jamie Oliver earn on YouTube? Net worth!

Even though Jamie’s channel is relatively big, it’s only a portion of his net worth. His net worth is estimated to be at a crazy $300 million. He published multiple books, some of them are amongst the top-selling in the UK, and he starred in various TV shows.

Some of Jamie Oliver’s TV shows