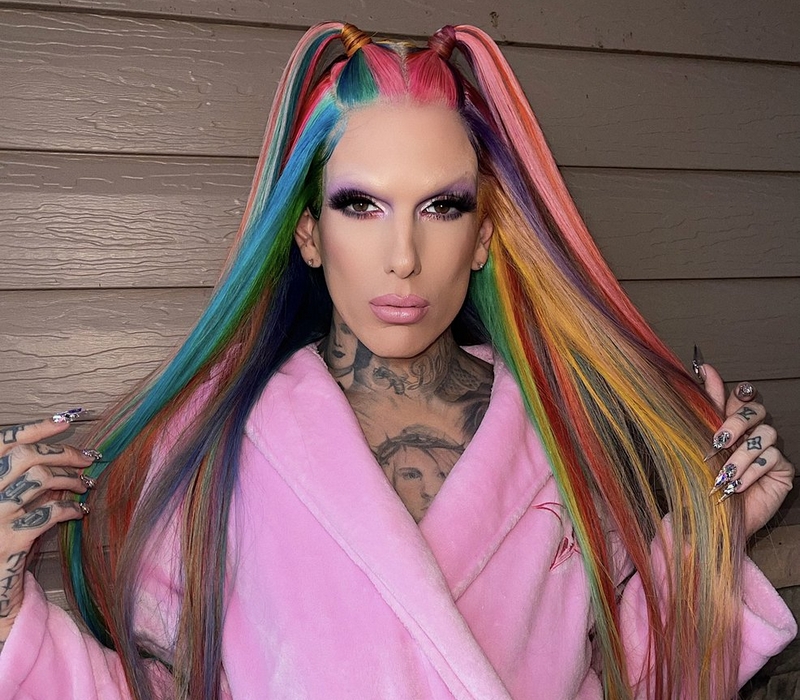 Jeffrey Lynn Steininger Jr., known under the pseudonym Jeffree Star, is an American YouTuber, makeup artist, and former songwriter and singer. Jeffree is the founder and owner of a cosmetics brand named Jeffree Star Cosmetics.

He started his career as a singer, Jeffree released his own studio album, Beauty Killer, in 2009. However, he left the music industry in 2013 before releasing his second album. One year later, Star launched his own cosmetics line called Jeffree Star Cosmetics and started his beauty era on his YouTube channel.

Who is Jeffree Star?

Jeffree was born on November 15, 1985, in Los Angeles, California. He grew up in Orange County, California, with his mother, Marra Shubyann Lindstrom Steininger and his grandparents. His father, Jeffrey Lynn Steininger, committed suicide when Jeffree was only six years old.

Star loved makeup since childhood, he liked to apply his mom’s makeup and experiment with it. Jeffree even convinced his mother to let him wear makeup to school when he was in his junior year at Pacifica High School. Steininger graduated in 2002, and he moved to Los Angeles shortly after. He started doing various jobs, Jeffree worked as a makeup artist, model and in the music industry.

Steininger was in a relationship from 2015 to January 2020. Star had a boyfriend named Nathan Schwandt. Nathan is a professional skateboarder and co-owner of the marijuana business with Jeffree. The couple met in 2015 through Instagram, as Nathan send DM to Jeffree. Star spoke about their breakup in his YouTube video “We Broke Up”, which he uploaded on his channel in January 2020.

Jeffree is an extravagant persona, and people knew him since the time of his MySpace “blogging” back in 2005. The real start of the fame of Jeffree Star was in the music industry in 2007. He was part of the True Colors Tour 2007 sponsored by the LGBT Logo channel. This tour travelled through 15 different cities across the United States and Canada and began in June in the Pride month.

In 2008, Star released his first studio album, Beauty Killer. This album was quite a success, one of the songs called “Lollipop Luxury” features Nicki Minaj. He signed with Akon’s studio Konvict Muzik back in 2010, and they planned to release the second album together. His music career suddenly ended in 2013 under unknown details, but the main problem was in Konvict Muzik due to Akon’s legal issues.

After this experience, Steininger decided to not rely on anybody else but himself and started his own business in 2014. Star is the founder and owner of the makeup brand Jeffree Star Cosmetics. Jeffree bet all the money he had left into this project, and it was totally worth it! Star used the power of YouTube to promote his makeup products and started to post YouTube videos regularly. This led to massive success for his YouTube channel, as he gained more than 10 million subscribers.

The first products he launched were liquid lipsticks, and it was an immediate success as they started to sell enormously. After that, Star announced a line of highlighters with an iconic embroidering in the shape of a star. He had released many products, such as lip scrubs, eyeshadow palettes, clothing, and makeup accessories. His eyeshadow palettes are known for extravagant packaging and excellent quality.

His YouTube channel is growing up every day, and Jeffree is posting videos regularly. His content consists mainly of his promotional videos for his cosmetics brand and occasionally some other videos such as his life updates, explanations of some controversies around his name, and him trying different makeup brands.

The name of Jeffree Star is often surrounded by controversy and public feuds. He had a big quarrel with tattoo artist Kat Von D. They were friends, but Kat Von D publicly ended this friendship when she accused Jeffree of racism, bullying and drug use. Jeffree responded that she never supported his brand, and he was devastated, saying that you never know when your best friend backstabs you in front of the entire world.

Star was involved in a feud originally between Tati Westbrook and James Charles. Tati accused Star and Shane Dawson of forcing her to upload the video BYE SISTER in which she “attacked” James Charles. Jeffree Star criticized Kylie Jenner and her skin-care products, Kim Kardashian and her products and Jerrod Blandino, co-founder of Too Faced Cosmetics.

Jeffree was accused of racism multiple times. He used racial slurs on numerous occasions. In June 2020, an archive of his former website Lipstick Nazi resurfaced, which included swastikas alongside photos of Star. He apologized shortly after. In October 2020, Star was accused of sexual assault, assault, and paying $10,000 to accusers. Jeffree Star’s lawyer denied all the allegations.

How many subscribers does Jeffree Star have?

How much does Jeffree Star make a year? Net worth!

In one of his videos in August 2018, Jeffree Star revealed that he made 150 million a year from all of his businesses. However, everyone estimated his income at around $20-30 million per year. As of 2021, Jeffree Star makes around $50 million per year from all of his businesses. If we look at his YouTube channel only, his revenue from ads and views should be approximately $20 million.

The Most Viewed Jeffree Star Videos