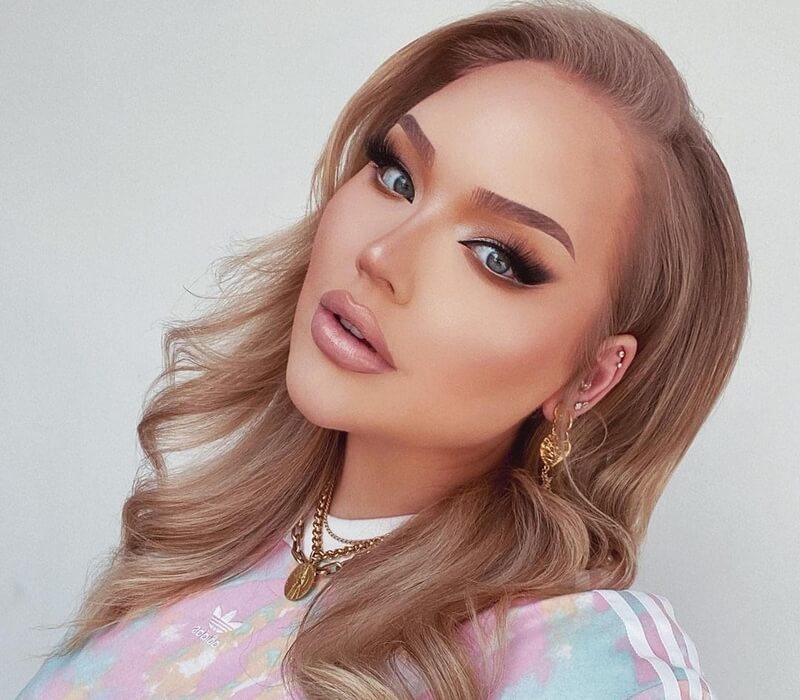 Nikkie de Jager, known online under the name Nikkie Tutorials, is a beauty YouTuber and makeup artist from the Netherlands. Nikkie is known for her makeup tutorials, she is very talented and can really transform herself completely. Her YouTube video "The Power of Makeup" went very popular, and she gained a giant mass of new followers because of that.

Nikkie is one of the most popular beauty influencers in the world, with more than 13,8 million subscribers on her YouTube channel. In January 2020, Nikkie came out as a transgender woman, she explained everything in her video "I'm Coming Out".

Who is Nikkie Tutorials?

Nikkie was born on March 2 1994 and grew up in Wageningen, Netherlands. Her mother, Saskia Spee, is the owner of the Dutch cosmetics company Het Cometicahuis. She supported her daughter from the beginning and stood by her. Saskia divorced Nikkie's father, and she is currently married to Jeroen Spee. De Jager has brother Emile de Jager and stepbrother Ravi Spee. Her next stepbrother Mikai Spee sadly passed away in May 2018. Mikai had been diagnosed with lymphatic cancer at the age of 13 in 2017.

In January 2020, De Jager revealed in the video "I'm Coming Out" her real identity. She said: "When I was younger, I was born in the wrong body, which means that I am transgender now.". Nikkie spoke about how she was born as a male, however, she always identified herself as a female. Her family supported her choice and didn't force her to anything she didn't want to. Thanks to that, Nikkie started growing her hair out and wore only female clothing when she was just 7 years old. Nikkie hoped the video will inspire and help others in a similar situation, she got very emotional. However, de Jager was pleased to liberate herself from this secret after 11 years on YouTube. The video gained overwhelming support from fans, the LGBT community and other YouTubers and celebrities.

In 2013, Nikkie was in a relationship with Rick Smit, who is from the Netherlands. After they broke up, Nikkie became secretive and sceptical about sharing her relationship status with the public. Everything changed when she started dating Dylan Drossaers in 2018. They got engaged on August 6 2019, at a romantic dinner date out in Italy. They decided to postpone their wedding because of the covid-19 pandemic, and they are still not married. The couple sometimes uploads videos together on Nikkie's channel, such as "Doing My FIANCE'S Makeup!".

On August 8 2020, De Jager and her fiancé Drossaers were robbed at gunpoint in their house in Uden. She took her time to recuperate from this incident and uploaded a video "Letting you know I'm okay... Makeup Therapy" after one week. In the video, Nikkie confirmed they are okay, and they just need to recover mentally. Due to legal reasons, she didn't share any concrete information about the robbery. The police arrested suspects of the theft, and they are still investigating the case.

Nikkie's YouTube career began in 2008 when she was only 14 years old. Nikkie decided to recreate a makeup look by Lauren Conrad, which she saw at MTV show, and uploaded her first makeup tutorial on her YouTube channel. After that, she uploaded numerous own makeup looks she created. De Jager wanted to become a professional makeup artist, and she enrolled in makeup coursework at B Academy in Amsterdam in 2010. In 2011, her dream came true, and she started working as a professional makeup artist for the Colourfool Agency.

In 2013, De Jager became the head makeup artist for the show I Can Make You a Supermodel with Paul Fisher that starred on RTL 5. One year later, Nikkie left the Colourfool Agency to pursue her freelance career as a hairstylist, makeup artist and YouTuber. In May 2015, Nikkie Tutorials posted a video called "Power of makeup", in which she showed how much makeup can change a person, doing makeup on only one half of her face to show the big difference. She wanted to share it with the world with the message that makeup is fun, and there is nothing wrong with it. This video was an enormous success and went viral "overnight", and Nikkie's fame grew up massively after that. This video was everywhere on the internet, and everyone was recreating it.

Nikkie created her own makeup line in collaboration with OFRA Cosmetics in 2017, including liquid lipsticks and a highlighter palette. In January 2019, De Jagger announced her exclusive contract with Marc Jacobs Beauty, she became the Global Beauty Adviser of the brand. That means she is integrated into the brand's product development process, as well as posting on the Marc Jacobs Beauty channel. In the same year, in December, Nikkie's dream came true once again when she met Lady Gaga and collaborated with her to promote Gaga's makeup brand Haus Laboratories. They created a video together called "Doing LADY GAGA'S Makeup!" in which she did Gaga's makeup with Haus Laboratories products.

In August 2020, De Jagger launched her own eyeshadow palette in collaboration with the brand Beauty Bay, featuring 20 pressed pigment shades curated by NikkieTutorials herself. Nikkie co-hosted Eurovision Song Contest 2021, which took place in Rotterdam, the Netherlands and became the first transgender person to host the contest.

How many subscribers does Nikkie Tutorials have?

How much does Nikkie Tutorials make a year? Net worth!

As of 2021, Nikkie Tutorials has an estimated net worth of $6 million.

De Jager has many sources of earning. Still, YouTube is one of her primary incomes, her channel gets around 1,5 million views per day across all its videos. This generates an estimated revenue of $12,000 a day, which means Nikkie Tutorials makes approximately $4,5 million a year just from YouTube ads.

Nikkie makes money from sponsored videos & posts, endorsement deals and sponsorships. She worked with companies such as Tweezerman, HSN, Fusion Beauty and many more. De Jager also has her own makeup line in collaboration with OFRA and Beauty Bay.

The Most Viewed Nikkie Tutorials Videos

Nikkie Tutorials won all of these awards: