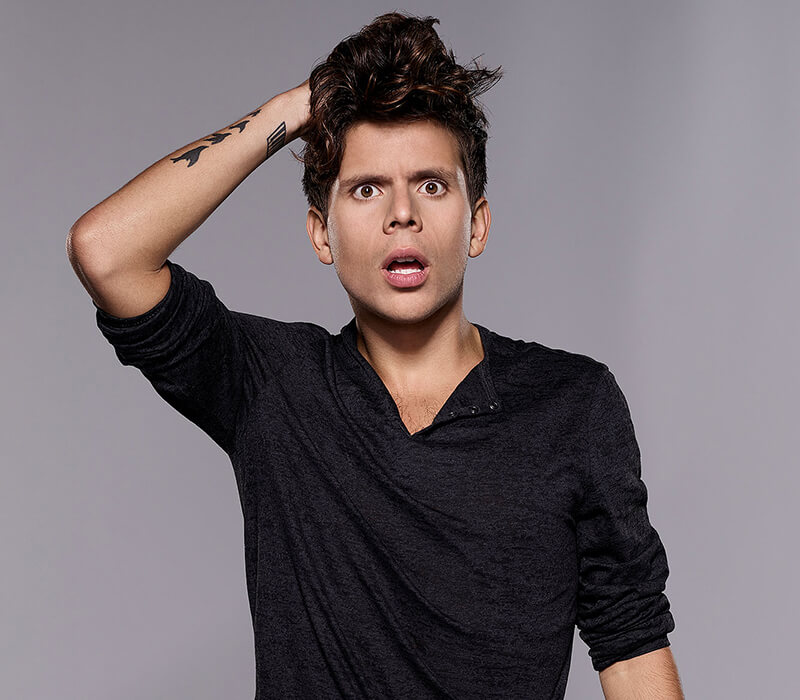 Rodolfo “Rudy” Mancuso was born on February 28th, 1992. Rudy is a Youtube sensation, American actor and musician. He was raised in Glen Ridge, New Jersey.

His Italian-American father and a Brazilian mother gave birth to Rudy Mancuso and his sister Marianna. Rudy lived for a short amount of time in Rio de Janeiro and speaks Portuguese fluently.

Mancaso attended Rutgers University Newark and Glen Ridge High School and started playing the piano at the age of five.

Rudy started making music at an early age. Even before he was able to walk, Rudy was reaching out to the piano.

Rudy Mancaso has been introduced to Vine by one of his friends. No one really knew what the platform was all about, so Rudy and his friends just hung out and created different goofy content. His first Vine ever made was him singing “Wimboweh” from The Lion King with his friends. Since his first Vine, Rudy improved his range and became one of Vine’s most-followed content creator.

There is not much known about Rudy’s personal life. You could see his mom in a few sketches and has an elder sister Marianna. Rudy also lived in Rio de Janeiro in his early years and called it “home” in one of his Twitter posts.

Rudy is in a relationship with Maia Mitchell. She is a fellow musician, and many people call this couple adorable. However, some rumours say they broke up for a short amount of time between February and March 2016. The two created a single together and a music video called “Magic” in 2018. Maia and Rudy celebrated their 5th anniversary in 2020.

Rudy performed as an opener for Justin Bieber’s Purpose in 2017 on his World Tour in Brazil’s section of Latin America shows. Mancaso performed at Villa Mix in July 2017 in Goiânia. Villa Mix is Brazil’s most popular music festival, and Rudy performed for two consecutive days.

Only a day after releasing his first song, Rudy performed at Villa Mix in São Paulo.

Rudy’s first-ever song not featuring another artist is called “Mama”. According to Billboard, this clip evokes “odd nostalgia”.

We know Rudy is a musician and writes his own songs, but he also wrote some songs for fellow content creators. Back in Vine, Rudy created many sketches with Lele Pons, another Vine superstar. In 2018, Rudy directed a debut single for Lele Pons called “Celoso” and a music video for Alesso’s song “REMEDY.”

Rudy Mancuso also directed the music video for O.A.R.’s single “Miss You All The Time”, which was released in October 2018.

What is Rudy Mancuso’s SYNESTHESIA?

Synesthesia is a neurological state where a person’s brain links senses together in a rare, fascinating manner. People with synesthesia might see a particular colour and response to a specific letter of the alphabet. Many people describe hearing colours, feeling sounds, and even tasting shapes.

Rudy Mancuso, with the help of advanced machinery, created his musical paintings. These advanced musical instruments created signals that put paint on a canvas, reading the pitch, note length, dynamics, velocity and range to give it a specific paint stroke. Mancuso performed an original composition four times to create four separate paintings. “We changed the scheme upon every take, and I performed it differently on every take, which is why the four pieces are different from each other,” explained Mancuso.

This project took an incredible 16 days, and the whole crew ran into multiple issues and tech glitches but came out on top.

How much does Rudy Mancaso make per month? Net worth!

You need to understand Rudy’s primary income doesn’t come from YouTube anymore. He transitioned into an actor, director and musician. He produces movies and music clips, works on his own projects, and creates his own singles. The previous information might be outdated, but I believe it was accurate when Rudy posted regularly.

These pieces of information might seem useless, but you can see how fast is Rudy growing, to a point where everyone’s estimation differs.