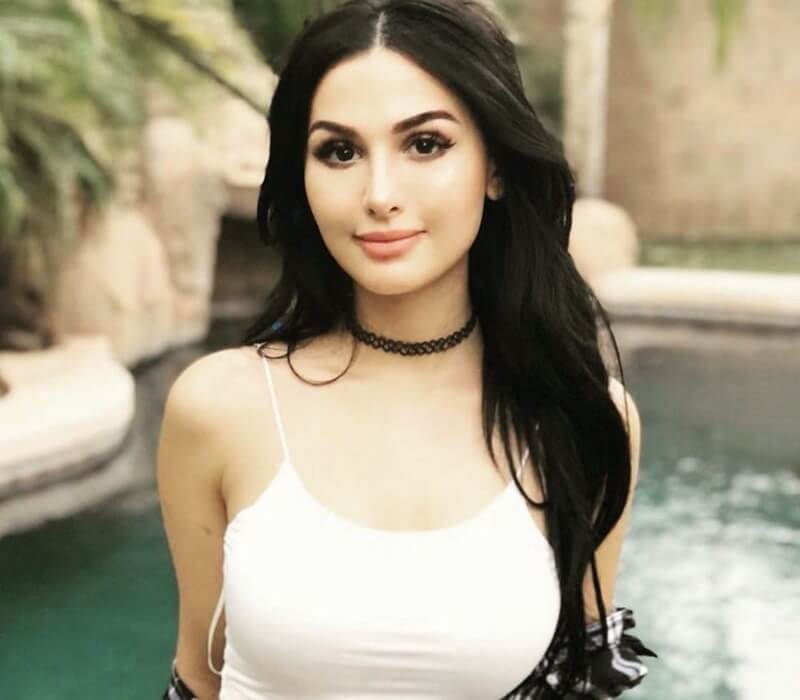 Lia first became famous on her YouTube page for her gaming videos, specifically for her Call Of Duty series. Later, she grew her channel to tens of millions of subscribers and shifted to more reaction videos. Shelesh originally started her YouTube career in 2011 on a channel called sexysexysniper, where she uploaded short vlogs. However, Alia deleted this channel after she made a new channel. As of today, her channel has more than 27,8 million subscribers.

Alia was born on October 22, 1992, in Liverpool, United Kingdom. She is half Greek and half Turkish, as her father is from Greece and her mother from Turkey. Her family moved to Phoenix, Arizona, in the United States when she was 6 years old. SSSniperWolf has always been obsessed with gaming. Her father bought for her and her brother a Playstation when she was a child, and she fell in love with games immediately.

After graduating from high school, Shelesh enrolled in a local community college. She quickly transferred to a university when she found out the community college teachers were rude. Alia completed one year of pharmaceutical studies before switching her major to nursing.

The inspiration for her pseudonym was her favourite character in popular culture, the villain Sniper Wolf in Metal Gear Solid. Lia is a crafty person, she loves designing and crafting her own clothes. She launched a second YouTube channel dedicated to DIY clothing, fashion reviews and makeup tutorials. One of Shelesh's hobby is anime culture, and she regularly takes part in cosplay anime events. However, she decided to concentrate full time on a YouTube Career and dropped out of university.

Alia started dating fellow YouTuber Evan Sausage in April 2013, they even started doing videos together. In 2016, after 3 years, the couple broke up but eventually got back together in June that year. The last appearance of Evans Sausage onscreen was in June 2017, but they never announced their official breakup.

On January 22 2013, Alia Shelesh uploaded her first video to her YouTube account. She played Call of Duty in that video but didn't speak or show her face. However, her photo in cosplay was featured in the thumbnail of this video. In February 2013, SSSniperWolf featured her face in a video for the first time. After that, the face camera was almost always part of her videos. She continued with gaming content and even started posting videos without any gameplay, first was a vlog in which she spoke about the upcoming release of the PS4. SSSniperWolf continued to post gameplay videos and vlogs. In March, she published her first totally gaming unrelated video, in which she made a sandwich in front of her viewers.

In May 2013, Shelesh uploaded her first cosplay video ever, where she dressed as Big Boss from Metal Gear Solid. This video accumulated over 250 thousand views on YouTube. Alia had her first live stream in June 2013, she live-streamed a live event, E3 conference, at the Los Angeles Convention Center in Los Angeles, California. In June, she announced her sponsorship with Origin. Ali streamer her first professional Cosplay shoot, in which she showed up as Metal Gear Solid character Quiet.

In August 2013, SSSniperWolf teamed up with several other YouTubers in the collaborative video for Call of Duty Black Ops 2 match. Alia started her second channel for DIY videos, called Little Lia Wolf, in 2014. Shalesh purchased Bugatti and uploaded a video about how he got it, thanks to her YouTube revenue in May 2014.

In December 2015, Shelesh turned down an offer from Playboy Magazine. SSSniperWolf's success has seen her work with some of the world's biggest gaming brands, including collaborations like Ubisoft, EA, Activision and Disney. She is ranked as one of the top female gaming influencers.

SSSniperWolf's name is surrounded with controversy. She slandered Engimahood in a video, stating that he was a "convicted sex offender". Engimahood sued her in August 2016, but the case was dismissed next year as he could not prove that her comments affected him. She is often accused of being toxic in games, especially by Overwatch community. In July 2017, Alia was exposed by FazeCensor. She accused him of faking text messager. However, Censor went to Verizon and retrieved his old text messages and conversation with Alia.

How many subscribers does SSSniperWolf have?

Lia is a big TikTok star with 15,2 million fans and 135 million likes. In addition, her Instagram account has more than 5,1 million followers.

How much does SSSniperWolf make a year? Net worth!

As of today, SSSniperWolf's net worth is estimated to be $50 million.

YouTube is her primary income, her channel gets around 17 million views per day across all its videos. This generates an estimated revenue of $100,000 a day, which means SSSniperWolf makes approximately $40 million a year just from YouTube ads.

The Most Viewed SSSniperWolf Videos