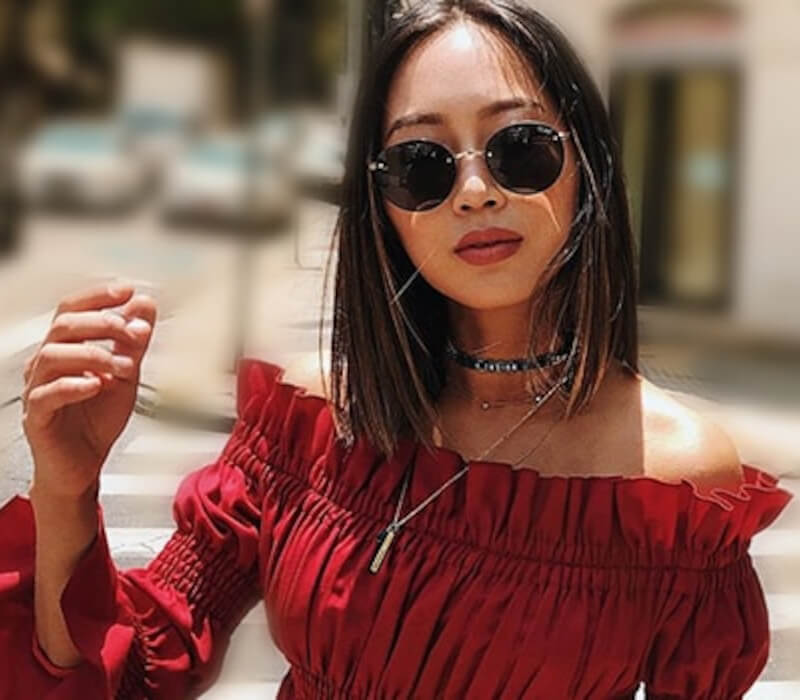 Who is Aimee Song?

Aimee Song is an American fashion designer and fashion blogger. Her fashion blog “Song of Style” has over 3 million page views per month. Aimee Song also owns a self-titled Instagram with more than 6 million followers. She also launched her own apparel collection, Two Songs and jewellery line Song of Style and is an ambassador for Dior, Giorgio Armani Beauty, Revolve and Chloé. Aimee also collaborated with multiple beauty brands such as Biossance, Levi’s and True Religion.

Most importantly, Aimee got featured in Forbes’ 30 Under 30 list in 2016 and The Business of Fashion as one of their BoF 500 people shaping the fashion industry.

To top it all off, Aimee is also an author, and her book Capture Your Style was on The New York Times best-seller list. She released her second book Aimee Song: World of Style, in 2018.

Aimee Song was born on December 10th, 1986, in Los Angeles, California. She has one younger sister Dani Song, who is a blogger as well.

When she was younger, Aimee wanted to be a lawyer because she was, by her words, “arguing with everyone”. Aimee was a co-captain of her cheerleading squad throughout her high school life. Later, she started toying around with the idea of being a car designer.

After that, Aimee graduated from the Academy of Arts University in 2012 with a fashion blog Song of Style as an undergraduate studying interior design in 2008. She interned in San Francisco at Huang Ibosi Architecture.

Aimee Song is married to photographer Jacopo Moschin. The two met together at a sponsored trip for influencers in Morocco. On November 2nd 2021, Jacopo and Aimee posted an Instagram post, “Made in Italy, coming soon…” in front of the Duomo of Milan church with Aimee rubbing her baby belly.

The career of Aimee Song

Aimee Song started her blog as a hobby when she attended the Academy of Arts University and studied interior design. She created an interior design blog, Song of Style.

Fashion blogging wasn’t really a thing before. Still, Aimee eventually realized her readers are interested in her outfits when showcasing room designs. After moving back to Los Angeles, Aimee had enough traffic on her blog that she could concentrate full-time on this hobby that turned into a job. That is to say, Aimee took full advantage of social media, started her Instagram, YouTube and Twitter.

Eventually, Aimee dove deep enough into the fashion world that she started collaborating with famous fashion brands such as Levi’s, Lacoste, Bloomingdale’s, True Religion and Biossance and even attended their runway shows. Aimee also launched her own line of jewellery, Song of Style and apparel collection, Two Songs. She became a fashion ambassador for Revolve, Dior, Chloé and Giorgio Armani Beauty and even collaborated with Laura Mercier. Laura is the pioneer of the “Flawless Face”, world-renowned makeup artist and creator of Laura Mercier Cosmetics, Skincare, Body & Bath and Fragrance.

Most importantly, Aimee wrote her own book “Capture Your Own Style”, which got to The New York Times best-seller list. Thanks to that, she got featured on Forbes 30 Under 30 list in 2016. In 2018, Aimee launched her second book “Aimee Song: World of Style”. The Business of Fashion included Aimee as one of their BoF 500 people shaping the fashion industry.

One thing that separates Aimee from other influencers is that she actually does what she studied. Song of style is a highly demanded interior design company that Aimee herself leads.

Aimee Song took full advantage of social media when she started her blog. She created a YouTube channel, “Song of Style”, and launched her first video, “My Fall Winter Fashion Must-Haves”, on November 10th, 2009. This channel contains videos about interior design, fashion, DIY and other topics. As of 2021, Aimee posts vlogs about her family life and her pregnant life. Song of Style has almost 500k subscribers and over 30 million views. Her most popular YouTube videos are “Aimee Song, I BOUGHT A HOUSE”,” How to Take Good Instagram Photos”, “Song of Style, Closet Tour – NEW HOUSE UPDATE”, “16 Ways To Wear A Turtleneck – Style By Number” and “Song of Style (Aimee Song) Closet Tour”.

Aimee’s most dominant social media is Instagram, with over 6 million followers. She regularly posts about her fashion ideas and family life.

How much does Aimee Song earn? Net worth!

Aimee Song’s estimated net worth is between $700,000 and $1 million. Most of her earnings come from her blog and social media presence. Aimee also gets revenue from her jewellery and apparel collection line and, above all, her books. Another source of income is her online shop, Two Songs, which she owns with her younger sister.

She also leads her own interior design business, Song of Style. This company is highly demanded as a kitchen and bathroom designer. Thanks to her blog, where she showcases different designs.