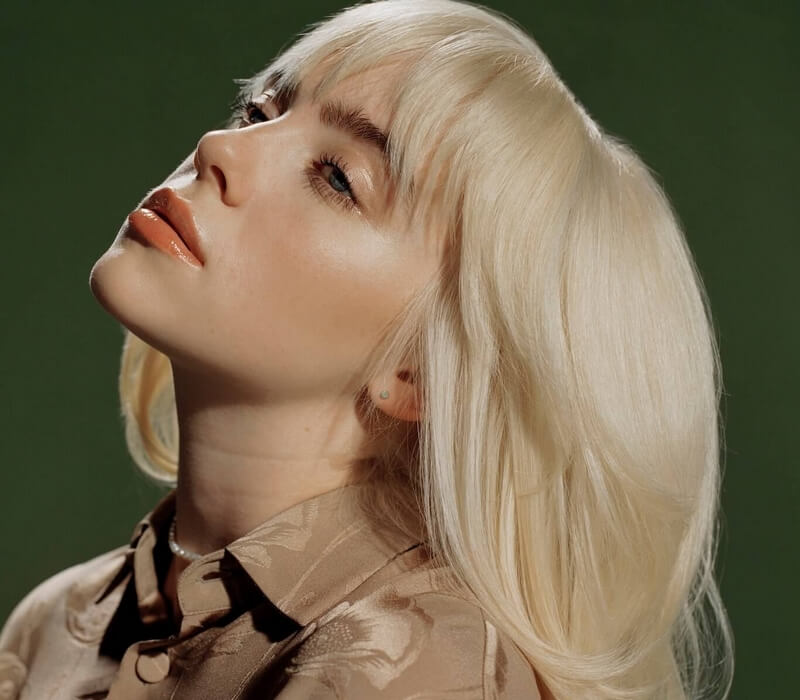 Billie Eilish, full name Billie Eilish Pirate Baird O'Connell, is an American singer, songwriter and influencer. Everything began in 2015 when she uploaded the song "Ocean Eyes" to SoundCloud. This song blew up, and she gained enormous attention. Her albums are "Don't Smile At Me" (2017), "When We All Fall Asleep, Where Do We Go?" (2019), and "Happier Than Ever" (2021). Many of her songs are placed at the top music charts. For example, single "Bad Guy" became her first number-one song on the Billboard Hot 100. In addition, her laters singles "Everything I Wanted", "My Future", "Therefore I Am", and "Your Power" peaked within the top 10 in the US and UK.

Eilish is one of the most successful artists of the 2010s decade and one of the highest-certified digital singles artists. She received several accolades, including seven Grammy Awards, two AMAs, two Guinness World Records, three MTV VMAs and two Brit Awards. In addition, Billie Eilish is an internet star, especially on Instagram. Her account has more than 86,8 million followers. As of today, Billie Eilish has six photos in the top 20 of the most-liked posts on Instagram.

Who is Billie Eilish?

Eilish was born in Los Angeles, California, on December 18, 2001. Her parents are both actors and musicians, her mum is Maggie Baird and her father, Patrick O'Connell. Billie is of Irish and Scottish descent. Eilish spent her childhood in the neighbourhood of LA called Highland Park.

She has an older brother Finneas O'Connell, who is producing music for Billie. They were both homeschooled, their parents wanted to spend time with them as much as possible. They wanted to pursue their interests such as art, dancing, acting and singing. Her mother taught them the basics of songwriting. Billie learned to play the Beatles' "I Will" on the ukulele when she was just 6 years old. At the age of eight, she joined the Los Angeles Children's Choir, where she developed the soulful vocals that we all know. Her first "real" song is called "Fingers Crossed" and the theme of the songs are the zombies as Billie was inspired by the series The Walking Dead.

Billie is super private about her love life, in the documentary "The World's A Little Blurry", Eilish opened up about her intimate relationship with rapper Brandon Quentin Adams and why they broke up after dating for under a year. Billie is now reportedly dating actor Matthew Tyler Vorce after they were pictured looking close on a coffee run. Billie Eilish is known for her spiritual love for Justin Bieber, as she said she loves him and was possessed by Justin Bieber her whole childhood. When Bieber married his wife Hailie, Billie said she honestly cried because she imagined herself to be Billie Bieber. They met with Justin, and he keeps protecting and supporting her.

Everything began in 2015 when her older brother Finneas enlisted her to sing "Ocean Eyes". He had written this song initially for his band and later put it online on SoundCloud with his sister singing it. The song quickly gained success, and Eilish signed a contract with the label Darkroom in 2016. In August 2017, Billie released her first EP with 8 songs called Don't Smile At Me. The EP was written by her and Finneas, hit immediate success, and peaked at 14 on the Billboard 200 chart.

In 2018, Eilish contributed a track to the second season of "13 Reasons Why", collaborating with Khalid on the hit single "Lovely", which was at the top of the charts. Later that year, she released singles "You Should See Me In A Crown" and "When the Party's Over", which both landed on her full-length debut, When We All Fall Asleep, Where Do We Go?. Again, she debuted at number one on the Billboard 200, this LP quickly became a worldwide smash and one of the most critically lauded efforts of 2019. Meanwhile, the pulsing single "Bad Guy" was released, and it was, once again, an enormous hit.

In 2020, Eilish became the youngest artist to be nominated in the four major Grammy categories - Record, Song of the Year for "Bad Guy", Album of the Year, and Best New Artist. On the heels of her win, Eilish premiered "No Time to Die", her theme song to the 25th James Bond film of the same name. Later that year, Billie released the R&B single "My Future", which became a Top Ten hit on the Hot 100. The single "Therefore I Am" closed out the year, topping charts across the globe. Both tracks landed on her sophomore album, 2021's Happier Than Ever. The album was announced in April 2021 via her Instagram with the information about her releasing the album on July 30 2021, and consisting of 16 songs.

Billie Eilish is one of the most prominent Instagram stars of all times, with more than 86 million followers. She uploaded 477 posts, and every one of them gets several million likes. Her first post was uploaded on January 12 2017. If we look at the most followed Instagram account list, Billie Eilish is ranked as 32.

Eilish is using the influence of the platform to promote her own music and work. She does not have any visible product promotions with brands like other influencers, her account is not full of ads. Although you can find news about her singles, music and projects on her Instagram, she promotes her own merchandise and albums. Billie is showing more of her personal life via Instagram stories. She posted her cover photo for Vogue magazine, and it became the photo to reach one million likes the fastest, reaching that milestone in just under six minutes.

How many followers does Billie Eilish have on Instagram?

As of today, Billie Eilish has over 86,8 million followers on her Instagram. It makes her account to be 32nd most followed Instagram in the world. Her posts get several million likes, an averagely of 10 million likes per Instagram post and 68k comments.

How much does Billie Eilish make a year? Net worth!

As of 2021, Billie Eilish's estimated net worth is established to be $55 million. Her net worth doubled the amount after earning approximately $25 million for her AppleTV+ documentary, The World's A Little Blurry. She also made it to the Forbes Celebrity 100 list of highest-paid celebrities, and she was also the youngest person to be featured on the list!

Billie Eilish is not doing paid promotional posts on Instagram, but she would be making about $350k per post if she would.