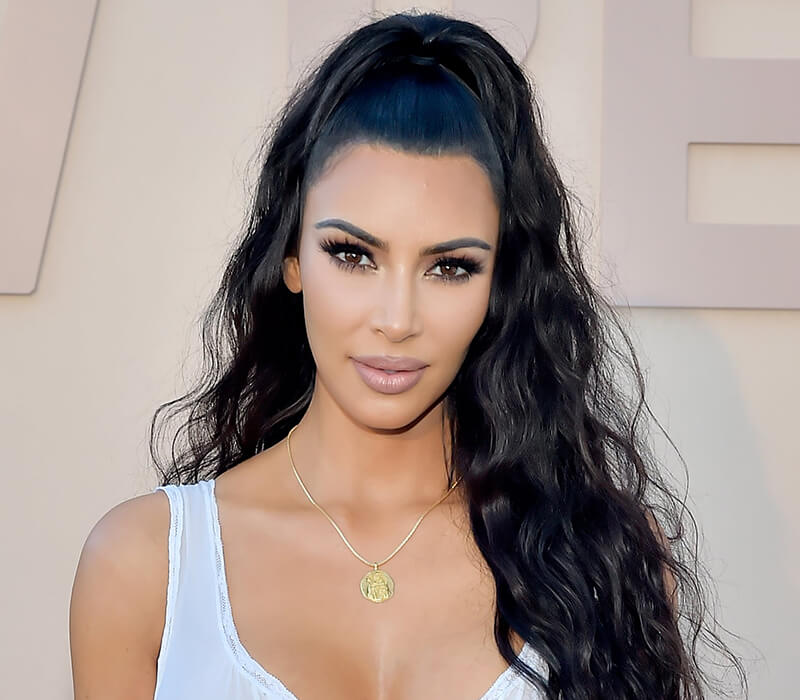 Who is Kim Kardashian?

Kimberly Noel Kardashian West was born on October 21st, 1980. Kim is an American celebrity, model, businesswoman and actress. She wasn’t born famous. In fact, she only got her first attention as a friend and stylist for Paris Hilton. Kim got even more attention after she shot a sex tape with her then-boyfriend Ray J in 2007.

Kim got her breakthrough with her family TV show but didn’t stop there. She became active on social media such as Instagram and Twitter. For example, her Twitter has over 70 million followers, and her Instagram has a whopping 260m followers.

Many products are tied with her name, multiple clothing and beauty products, mobile game “Kim Kardashian: Hollywood” and a photo book Selfish released in 2015.

Kim Kardashian was married to Kanye West, and they have four children together. Their marriage got a lot of attention and media coverage.

Kardashian also starred in multiple movies such as Disaster Movie (2008), Deep in the Valley (2009), and Temptation: Confessions of a Marriage Counselor (2013).

Kim also became more political and lobbed for president Donald Trump for prison reform and lobbying for Alice Marie Johnson to be granted amnesty. Kim also plans to become a lawyer. She started with a four-year law apprenticeship supervised by the legal nonprofit #cut50, which was co-founded by Van Jones.

We covered Kim Kardashian as a social media person, TV show star, wife, actress, and political activities, but Kim is also a businesswoman. She founded KKW Fragrance and KKW Beauty in 2017. In 2019, Kim started a shapewear company, “Kimono”, but changed the name to “Skims” because of widespread backlash.

Kim’s parents divorced in 1991 but remained close friends. Her mother married that same year to the 1976 Summer Olympics decathlon winner Bruce Jenner who now goes by the name Caitlyn Jenner after coming out as a transgender woman, but they divorced in 2015. Kim has two stepsisters from Kris’s second marriage, Kendall and Kylie Kardashian. Bruce Jenner had four children before marrying Kris Kardashian. Burt, Cassandra “Casey”, Brandon, and Brody. That means Kim Kardashian has 9 siblings and step-siblings in total.

Kim Kardashian got into show business thanks to her friend Paris Hilton. She was Paris’s stylist and appeared as a guest in her reality television show “The Simple Life” (2003-2006).

Kim opened a boutique shop D-A-S-H in Calabasas, California, with her two sisters in 2006.

Ray J, her boyfriend from the past and Kim shot a sex tape together in 2002, which was leaked in February 2007. Kim Kardashian filed a lawsuit against Vivid Entertainment, the movie’s distributor “Kim Kardashian, Superstar”. This case was later settled with Kim reportedly receiving $5 million and allowing Vivid to release the sex tape. There is a conspiracy that this whole drama was just a stunt to promote their upcoming reality show.

“Keeping Up with the Kardashians” is arguably the breaking point for Kim when she finally got famous. This show started in October 2007 and is still running in 2021. Her whole family is starring in this show, including her mother, Kris Jenner, step-parent Caitlyn Jenner, siblings Khloé, Kourtney, Rob Kardashian, and stepsisters Kylie and Kendall Jenner. This series became so successful that it launched two spin-offs, “Kourtney and Kim Take Miami” and “Kourtney and Kim Take New York”.

In 2008, Kim partnered with Mark Ballas to participate in season seven of Dancing with the Stars but got eliminated third. That same year Kim Kardashian debuted in the disaster film spoof “Disaster Movie” as Lisa.

Kim Kardashian offered her face to Fusion Beauty and Seven Bar Foundation. They launched a campaign, “Kiss Away Poverty.” For every LipFusion lip gloss sold, $1 went to fund women entrepreneurs in the US. A month after this charity work, Kim released her first fragrance, self-titled “Kim Kardashian.”

Kourtney, Khloé and Kim launched several clothing collections and fragrances. PETA criticized Kim for repeatedly wearing fur coats. PETA even named Kim one of the five worst people or organizations of 2010 when it came to animal welfare.

Kim Kardashian filmed a music video called “Jam (Turn It Up)” in December 2010. This video was directed by Hype Williams and included Kanye West appearing in it. It premiered at a New Year’s Eve party at TAO Las Vegas. Kim stated that “There’s no album in the works or anything. Just one song we did for Kourtney and Kim Take New York. A video Hype Williams directed, half of the proceeds we’re giving away to a cancer foundation because The-Dream’s and one of my parents passed away from cancer. It’s just all having fun, with a good cause”. Jim Farber, Daily News writer, wrote in one of his articles, “This song is a dead-brained piece of generic dance music, without a single distinguishing feature”, and stated that the single made Kim Kardashian the “worst singer in the reality TV universe.”

Kim Kardashian starred in the romantic drama Temptation: Confessions of Marriage Counselor (2013). This movie was produced, directed and written by Tyler Perry. Kim played the role of the co-worker of an ambitious therapist. Kardashian won the Razzie Award for Worst Supporting Actress.

Kim appeared on the cover in Paper’s winter 2014 issue, photographed by Jean-Paul Goude. Her nude buttocks are featured above the caption: “Break the Internet.” This stunt generated some criticism, especially in one of the Time magazine articles. Paper’s website was receiving 25,000 views on average. After posting Kim’s cover, Paper’s website got a crazy 16 million views in one day.

Kim Kardashian launched a self-titled mobile game in June 2014. The object of Kim Kardashian: Hollywood is to become a Hollywood star or starlet. This game is a classic free-to-play game with in-game microtransactions for various boosts and cosmetic items. It became one of the most popular games, earning over $1.5 million in its first five days. Game’s developer Glu Mobile stated that this game was the fifth highest-earning game in Apple’s App Store.

In November 2016, Kim was paid anywhere from $75,000 to $300,000 per post on her social media. She is not afraid to promote various products like teeth whiteners, Coca-Cola, waist trainers, beauty products and well-known charities.

Almost two years later, in 2018, Business Insider wrote that Kim is charging more than double per post on her social media.

The love life of Kim Kardashian

Kim Kardashian had three husbands. He married a music producer Damon Thomas in 2000, but Damon filed for a divorce in 2003. She later stated that their physical and emotional separation was because of abuse on Damon’s part. Kim even admitted she was high on ecstasy during the ceremony. Before she got entirely divorced from Damon, Kim started dating singer Ray J.

In October 2010, Kim started dating NBA player Kris Humphries who played for New Jersey Nets. They got engaged in May 2011 and married on August 20th in Montecito, California. A two-part special show aired on “E” showing all the wedding preparations. The Washington Post even called a “media blitz” because of their wedding. This marriage lasted for 72 days before Kim filed a divorce on October 31st for irreconcilable differences. The public started speculating about this marriage being just a stunt to promote the Kardashian family and their television ventures. Jonathan Jaxson stated that their marriage was staged and a ploy to generate money. Kim filed a lawsuit against Jonathan, claiming the allegations were untrue. Eventually, this case was settled, including an apology from Jonathan Jaxson. People thought they were being played and created a petition to remove all Kardashian-related shows airing.

After things settled down, Kim started dating her longtime friend Kanye West in April 2012. However, she was still legally married to her previous husband. They finally divorced on June 3rd, 2013. Kanye West proposed to Kim on October 21st, her 33rd birthday. This couple got married on May 24th, 2014, at Fort di Belvedere in Florence, Italy. Uniting these two famous personalities called for massive media attention. The New York Times itself called their marriage “a historic blizzard of celebrity”. After almost seven years, in January 2021, CNN uncovered that the couple was discussing a divorce. Kim officially filed for divorce on February 19th, 2021. Kanye and Kim appeared in court and agreed to end their marriage due to “irreconcilable differences”. The whole divorce was processed without drama. They decided on joint custody for their four children, and there is no need for spousal support.

It’s no secret that Kim Kardashian had complicated pregnancies. During her first, she experienced preeclampsia, which made her deliver at 34 weeks. During both pregnancies, Kim suffered placenta accreta after delivery. Kim needed to undergo surgery to remove the placenta and scar tissue. Doctors advised Kim to not become pregnant again. Her children Chicago and Psalm were born via surrogacy.

In April 2015, Kardashian and West travelled to Jerusalem. Their daughter North West was baptized in the Old City’s Armenian Quarter in the Armenian Apostolic Church. It’s one of the oldest denominations of Oriental Orthodox Christianity. This ceremony took place at the Cathedral of St. James, and Khloé Kardashian got appointed the godmother of North.

How much does Kim Kardashian earn? Net worth!

Kim Kardashian’s net worth was $45 million in May 2014. You would think it could have doubled, maybe tripled in 7 years, but that is nowhere close to the truth. Forbes reported that Kim’s earnings doubled in 2015 to $53 million per year and stated, “Kim Kardashian has monetized fame better than any other.”

Much of her income includes earnings of the Sears line, the Kardashian Kollection and the Kardashian Beauty cosmetics line, the boutique-line DASH, Kardashian-branded tanning products and most importantly, sponsored social media posts, which are collectively worth roughly $500,000 per post.

On April 6th, 2021, Forbes estimated Kardashian’s net worth at $1 billion and officially included her on their billionaire list.