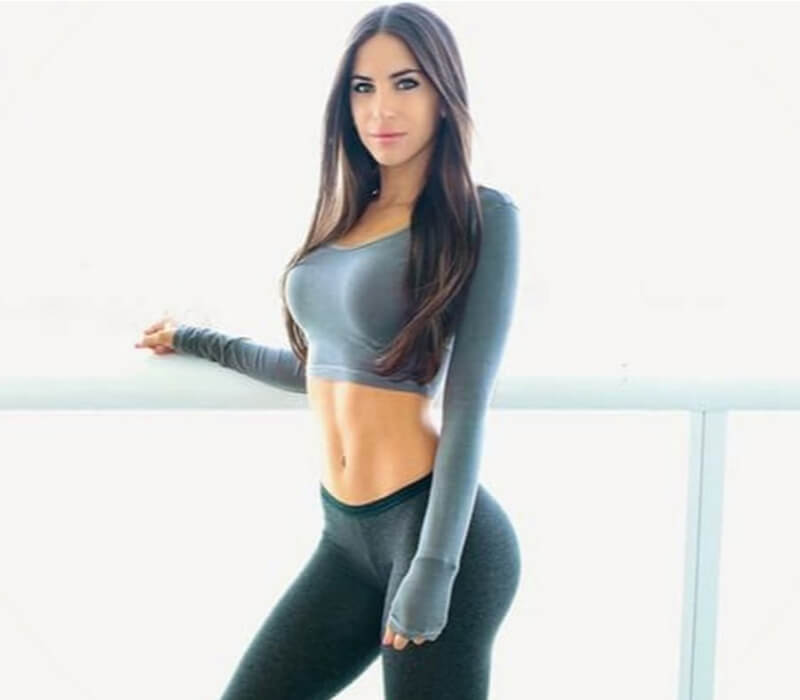 Who is Jen Selter?

Jennifer Selter was born on August 8th, 1993. She is an American social media personality, fitness model and enthusiast. Jen gained her popularity through activities on YouTube, where she regularly posts videos about exercise plans, diet and multiple Instagram accounts, each serving different purposes.

Thanks to her fitness modelling career, Jen appeared in magazines such as Vanity Fair, Elle, Muscle $Fitness, FHM and Maxim. Jen has a strict fitness lifestyle, but she is not afraid to eat unhealthy food and states that the most important thing is to “Get back on track”.

She got the most attention in 2014 after popularizing the term “belfie”, which is basically a selfie with the intention to show your buttocks. Most importantly, Jen has an unrealistically perfect figure and attractive appearance, which lures both men and women to keep track of her progress. All of this comes at a cost. Athletic figure worked out abs and worked out buttocks don’t just happen overnight. Jen follows a strict fitness routine and a healthy diet.

Jen was born on August 8th, 1993, in New York, US. She was born to Jill Weinstein and Todd Selter, who didn’t live with them. Jill Weinstein raised Jen as a single mother in a Jewish family. Jen has two siblings, older sister Stephanie Selter who helps her run Jen’s Instagram account and step-brother Jacob from Jen’s stepfather’s Rob’s side.

Jen Selter attended Roslyn High School, where she got bullied a lot. The thing is, Jen wasn’t always that seemingly perfect as she is today. Her mother claimed Jen often returned from school with tears in her eyes. As a result, Jen tried everything to keep herself from bullies. She even wore padded bras and crop tops to divert people’s attention from her “not-so-attractive” face.

As Jen became 15 years old, she got an idea. She always thought her nose was too big for her face and convinced her mother to allow her rhinoplasty. Jen stated that this tiny surgery changed her life, and she wanted to further improve her looks. Consequently, Jen started exercising and completely changed her diet and eventually achieved the body she always wished for.

After graduating from High School, Jen took multiple courses related to Cosmetology and started working at a plastic surgeon’s office. Jen faced allegations that she had plastic surgery to enhance her buttock but always denied such claims.

Jen Selter was rumoured to date Dan Bilzerian, a fellow Instagram personality, in 2014. It all started after one Instagram post showing them together partying in Las Vegas. Dan Bilzerian denied such rumours and stated that he is not the type of person who wants to be in a committed relationship.

Jen was reportedly dating singer James Maslow since March 2017 after being spotted together at a beachside resort in Tulum, Mexico. Neither of them confirmed or denied this information.

There were rumours about Jen dating a player from New York Knicks, Kristaps Pozingis.

The career of Jen Selter

Jen Selter began working out seriously at the age of 15 while still in high school. After some time, she built a fabulous physique, especially her toned abs and glutes. Jen always admired social media and decided to start her own Instagram channel in March 2012.

Jen Selter showcased her fitness life and physique but didn’t really get the attention she wanted. Thanks to taking an extra step in showcasing her buttocks, she finally got more attention. Her fans invented the term “belfie”, basically a selfie with an intention to show your buttocks. In 2014, Jen eventually rose to the prominence she always dreamed of and started multiple new Instagram accounts for different aspects of her life. For instance, one of her accounts posts only pictures of her pet dog, another one couple pictures, and a different one promotes fitness clothing lines.

All her accounts became overly successful but managing so many accounts is too hard for one person. Jen has a team of people managing her accounts with her sister Stephanie in charge.

Thanks to high traffic on these accounts, Jen got attention from many lucrative deals and company product promotions, especially for fitness brands. She earned herself a contract with fitness app “Fitplan”, where monthly subscription subscribers interact with Jen and learn about her fitness plans. This app is top-rated among the female audience.

Jen Selter is a creative director of “ION Collection”, an athletic jewellery brand and spokesperson of “Peeks”, a video sharing platform. On her Instagram, Jen already grabbed herself promotions for companies like Tarte Cosmetics or Nike.

Jen owns a closed Facebook group where she regularly discusses fitness plans and posts at least one picture per day.

Jen Selter owns or is a founder of five different Instagram accounts. Her self-titled Instagram account has over 12.5 million followers. It is used for posting her fitness progress and healthy diet ideas.

Jen is a co-owner of BlendJet smoothie and milkshake producers. This Instagram account has over 600,000 followers and showcases its drink supplements or recipes.

Jen Selter is a founder of Jenstabar, a company producing sugar-free protein bars. Jenstabar has over 40,000 followers and regularly posts its products.

She is also the founder of the Instagram page Couplegoals, with more than 4.5 million followers. This account posts very often and features pictures of various couples.

Jen owns an account, fitplan_app, where she regularly posts about different exercises and fitness plans. This account has over 420,000 followers.

Jen Selter owns a self-titled YouTube channel with over 50,000 subscribers. So far, Jen has gained over million views throughout all of her videos. Funny enough, Jen gets an average of 30,000 views on each of her videos. Still, her most popular video, “8 MIN LOWER BODY BURN // No Equipment”, has over 850,000 views. This means one of her videos generated more than two-thirds of her overall views. Jen didn’t post on her YouTube account for more than a year. When she did post, her videos mainly were fitness routines, lifestyle vlogs or healthy recipes.

Jen Selter also has a TikTok account with over 1.8 million followers and more than 14 million likes. She usually posts videos related to a healthy diet or showcasing her fitness progress or routine. To not make you think Jen is just a fitness freak, she also publishes various TikTok trends, videos with her family or funny videos of her dog.

How much does Jen Selter earn? Net worth!

Jen Selter’s estimated net worth is around $6 million. Most of her earnings come from sponsored campaigns and posts. Jen’s fee per sponsored post is roughly $80,000. She also gets a salary from subscription fees on Fitplan. This company is expected to accumulate more than $1 million per year.

Jen Selter got herself some lucrative deals through her social media presence. She got herself brand endorsement contracts with huge companies such as New Balance, Nike and Lululemon.