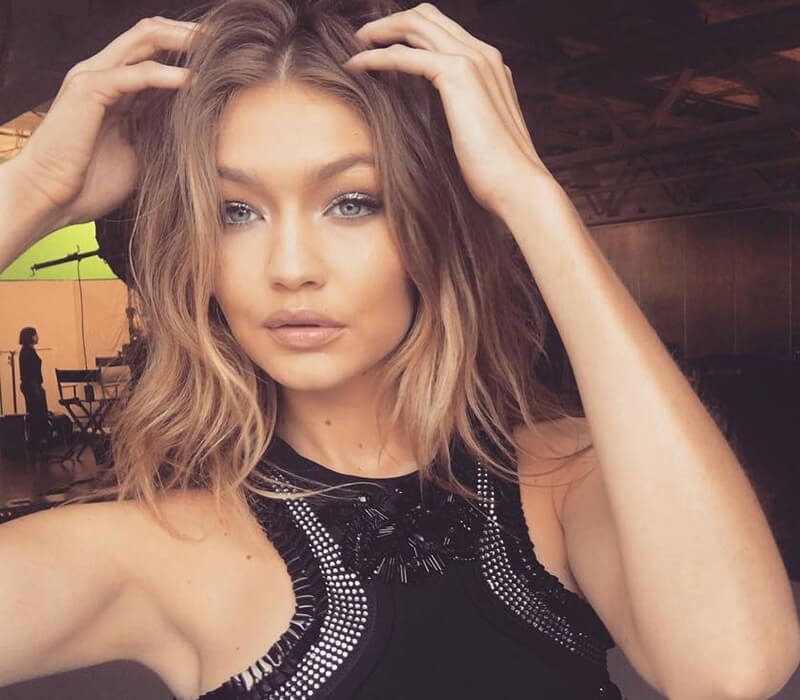 Who is Gigi Hadid?

Jelena Noura Gigi Hadid was born on April 23rd 1995. Gigi Hadid is an American model and social media person. She got the most attention after Models.com featured her in its Top 50 Models. The British Fashion Council also named Gigi Hadid the Model of the year.

Gigi Hadid was born in Los Angeles, California, to former model Yolanda Hadid and real-estate developer Mohamed Hadid. Gigi claims that she is a descendant of Daher Al Omer, Sheik of Galilee and Prince of Nazareth through her father. She has two younger siblings, brother Anwar and sister Isabella and two half-siblings Marielle and Alana, from her father’s first marriage. Yolanda and Mohamed split in 2000. After that, Yolanda married David Foster and moved to Beverly Hills with her children. They divorced in May 2017.

Gigi Hadid attended Malibu High School and graduated in 2013. Gigi played volleyball as team captain during her school years and was an expert horseback rider (equestrian). After graduating high school, Gigi moved to New York City to study criminal psychology at The New School. She later dropped out of college to focus on her modelling career.

The career of Gigi Hadid

Gigi Hadid got her first modelling job when she was only two years old. Paul Marciano, who worked for Guess, discovered Gigi. She started modelling for Baby Guess but stopped focusing on school. Gigi reunited with Guess in 2012, became its face and shot three campaigns with it.

Gigi Hadid signed a contract with IMG Models in 2013 and performed at New York Fashion Week in February 2014.

By 2015, Gigi got so popular that she walked for well-known designers like Chanel, Michael Kors, Max Mara, Jean-Paul Gaultier and Marc Jacobs. Isabelle and Gigi appeared in a music video, “Bad Blood” by Taylor Swift. Finally, in December 2015, Gigi appeared at Victoria’s Secret Fashion Show.

The year 2016 was even more successful than the last year. She walked for Chanel, Elie Saab, Fenty x Puma, Giambattista Valli, Tommy Hilfiger, Isabel Marant, Miu Miu, Balmain, Marc Jacobs, Versace, Fendi, Diane Von Furstenberg and Anna Sui. Above all, she became a global brand ambassador for Tommy Hilfiger in January 2016. Gigi hosted the American Music Awards 2016 alongside Jay Pharoah. Some people think she overstepped a little with her impression of former First Lady Melania Trump during the show, and Gigi needed to publicly apologize.

Gigi Hadid made her second appearance at Victoria’s Secret Fashion Show and earned her wings for the first time. Thanks to this event, Gigi won the award for International Model of the Year at the British Fashion Awards by Donatella Versace.

Gigi Hadid worked as a photographer for the Versace Spring/Summer 2017 campaign. This campaign featured singer and her boyfriend Zayn Malik and model Adwoa Aboah. Her photo shooting skills were also used in a special summer edition of V Magazine. “Gigi’s journal” featured polaroids of various colleagues from the fashion industry, close friends and celebrities.

Gigi Hadid was all over the world in 2017. She starred in Vogue covers in Arabia, the UK, China and US. Subsequently, Gigi appeared on covers of CR Fashion Book The Daily in Spring 2017, Fashion Book in Spring/Summer 2017 and Jolie in April 2017. Some covers worth mentioning are also Netherlands editions of Vogue, American Harper’s Bazaar and Cosmopolitan and Glamour. Gigi Hadid also starred in editorials for LOVE Magazine in Spring/Summer 2017 and American Vogue in April 2017.

Gigi Hadid joined multiple high fashion campaigns in 2018, such as Versace, Fendi, Valentino and Moschino. She collaborated once again with Messika Jewelry and Vogue Eyewear for her second release of these products. Most importantly, Gigi presented her fourth and last season of her capsule collection for Tommy Hilfiger in Milan.

Gigi Hadid collaborated with Reebok in November 2018 for her brand new collection of sneakers with limited supply released in February 2019. She also made an appearance in Victoria’s Secret Fashion Show for the third time the same month and appeared on new Vogue covers such as Vogue Arabia, Vogue Hong Kong and Vogue Czechoslovakia.

Gigi Hadid appeared in a Food Network cooking competition, Beat Bobby Flay, in October 2019. Anne Burrell and Gigi competed against chef and restaurateur Bobby Flay. After that, Gigi starred in the show once again as a guest on October 1st in an episode Scooby-Doo and Guess Who?.

The controversy of Gigi Hadid

Gigi Hadid was criticized for what she did in 2017. She attempted to travel to Shanghai for another Victoria’s Secret Fashion Show but couldn’t because her Chinese visa was reportedly denied. Gigi Hadid held a Buddha cookie next to her face while baking with her sister, mimicked Buddha’s face and narrowed her eyes. This caused Gigi to be called racist by Chinese internet users.

Victoria’s Secret didn’t comment on this calamity and didn’t answer if Gigi was pulled out of the show. Gigi Hadid didn’t perform in China, but she wasn’t the only one. A famous singer Katy Perry was banned from the same show after wearing a sunflower dress at a concert in Taiwan. If anyone wonders why that is a problem, the sunflower is an against-China symbol.

Gigi Hadid got sued by an independent photo agency, Xclusive, for sharing photos without the photographer’s permission. Xclusive claimed that this caused damages at copyright infringement and cut down the profits from the image. Gigi withdrew the photo, but it wasn’t over. Xclusive claimed that this wasn’t the only occasion Gigi posted her photos without the consent of the photographer and presented about 50 examples.

Gigi Hadid is quite popular on Instagram with more than 70 million followers and an average of 4 million likes on any post. It was just a regular day in New York when Gigi took a photo of a complete stranger, a fellow model Nanga Awesome. Gigi took a quick snap of Nanga and posted it on her Instagram “Shoutout to my NYC inspiration of the day, this queen.” “Was too shy to get a pic of the front, but she was major.” Nanga was wearing a beige colour long-sleeved top tied at the waist, with pocket-less high waist denim jeans and a blue saddlebag.

At this point, Nanga’s life had already changed, but she had no clue yet. Two girls Nanga didn’t know speculated if it was her on the post they’d just seen and ended up showing Nanga the post. Nanga responded on Twitter with, “It’s the way @GiGiHadid would have changed my entire life if I was only facing the right way.” Gigi didn’t wait too long before posting a response “You were facing the right way exactly where you were headed. Sunshine! Sending biiiiig love Nanga!.” This went back and forth for a while. “I am not too cool for this. I am losing it.” After a few hours, Nanga wrote, “My life completely changed overnight”. “I’ve been told I was ugly, I’ve been turned down by so many agencies, I’ve been turned down by so many jobs, and just to have someone like her see me and tell me that I was pretty and tell me I was major, it changed the trajectory of my month.”

Nanga posted once again on her Twitter, “After this, anything can happen. I have full faith that my life could actually work out, and my career could actually go somewhere. That really, really made me so happy.” It turns out that Nanga got contacted by multiple agencies and modelling projects thanks to Gigi’s shoutout, including a job with Maybelline and a brand ambassador partnership with Nasty Gal.

The love life of Gigi Hadid

Gigi Hadid dated Australian singer Cody Simpson between the years 2013 and 2015. She appeared in his music videos “Flower” and “Surfboard.” After that, Gigi dated American singer Joe Jonas in 2015 after she and Cody broke up. During her relationship with Joe, Gigi directed the music video “Cake by the Ocean.”

At the end of 2015, Gigi was on and off dating English singer Zayn Malik. Zayn and Gigi collaborated with Versace as a couple in Versace’s campaign, with Zayn as model and Gigi as a photographer. Gigi appeared in Zayn’s music video “Pillowtalk”, and they both starred on the cover of American Vogue in August 2017. They appeared on the cover of American Vogues, making them the third couple ever achieving this. Although this might sound like a good thing, Vogue called their relationship “gender fluid”, which backlashed and made Vogue apologize to this couple.

Gigi Hadid confirmed in April 2020 that she and Zayn are expecting their first child on The Tonight Show with Jimmy Fallon. Their daughter Khai Hadid Malik was born in September 2020. Zayn and Gigi spend their time on a farm in rural New Hope, Pennsylvania, where they raise Khai. Thanks to this, Gigi is really close to her family because her mother and younger sister own land in this area.

How much does Gigi Hadid earn? Net worth!

As an American model and reality television star, Gigi’s net worth is approximately $30 million. Collaborating with companies such as Evian, BMW, Maybelline, Tommy Hilfiger and Versace makes Gigi one of the top-earning models in the world. Gigi Hadid earns around $10 million per year.

Gigi is not only a model and TV star. She is also a social media personality. An Instagram account with over 70 million followers creates many lucrative deals by promoting different products.

As of her spendings, Gigi bought a two-bedroom condo in 2015 in the Noho Neighborhood of New York for $4 million. Three years later, in 2018, Gigi bought a three-bedroom duplex in the same building for $6 million and wants to combine both apartments into one massive unit.