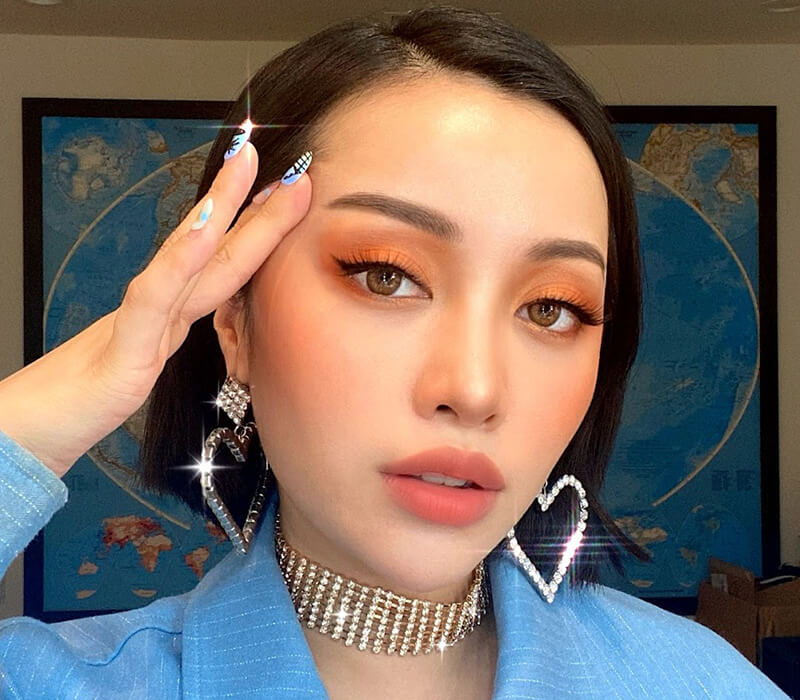 Who is Michelle Phan?

Michelle was born on April 11th 1987, in Boston, Massachusetts. She has an older brother Steve Phan and a younger step-sister, Christine Phan. Phan shared that her biological father left the family when she was young. Her mother, Jennifer Phan, remarried but eventually left Phan’s stepfather after years of abuse. Michelle’s mother, brother Steve Phan and her step-sister Christine Phan moved to Tampa, Florida. After that, Michelle attended Tampa Bay Technical High School.

Michelle started attending Ringling College of Art after her graduation from Tampa Bay Technical High school. She received her Honorary Doctorate of Arts degree in March 2014.

Her sister Christine is a fellow YouTube beauty artist. They collaborated on each’s other channels throughout the years.

Phan’s boyfriend is Dominique Capraro, a Swiss model of Italian descent. Michelle and Dominique met on Valentine’s Day in New York in 2008. They remained friends for two years until they started dating.

After meeting in 2008, they started corresponding online on a regular basis. It took two years for them to meet again in Paris in 2010 before their relationship took a more serious turn.

Capraro made an appearance in multiple of Michelle’s videos. They later decided they wanted to keep their relationship more private and stopped posting videos or pictures together. There is currently no information about any of their future plans, such as marriage and children.

Phan stopped posting on YouTube in 2015. She finally clarified why she took her to break in a video posted on June 1st, 2017. Phan clarified that the failure of EM Cosmetics and the ruthless approach of an online community left a mark on her mental health. Therefore she decided there was time to take a break and focus on herself.

She continued in her break before returning to YouTube in September 2019.

The career of Michelle Phan

Michelle started her career as a blogger on a platform called Xanga. She posted different makeup tutorials and received requests for further instructions from her fans. This resulted in Michelle posting videos on Xanga, ultimately started her YouTube career in May 2007 under her Xanga name Ricebunny.

Phan’s YouTube career got a massive boost when Buzzfeed highlighted her two “How To Get Lady Gaga’s Eyes” makeup tutorials. This brought her over a million subscribers and got her much more attention with many lucrative deals.

Lancôme partnered with Phan as their official video makeup artist, after her featuring some of their products in her videos. Michelle Phan became the company’s first Vietnamese-American spokesperson.

Michelle Phan co-founded My Glam. For a monthly subscription, you get beauty products every month. It got finally launched in September 2012 and was later renamed ti Ipsy. This company is one of the main sponsors of the Generation Beauty conference. In 2012, Michelle Phan became a YouTube advertising partner and launched FAWN, a YouTube multi-channel network.

Phan partnered with L’Oreal on August 15th, 2013 and launched a new cosmetic line called EM Cosmetics, dedicating the brand to her mother. Michelle decided to buy L’Oreal’s share of EM Cosmetics through Ipsy in April 2015. These laters were officially confirmed on her Instagram in December 2016.

After acquiring the whole share of EM Cosmetics, Phan decided to resign from Ipsy and focus on EM Cosmetics. She relaunched the brand in April 2017, resigning from Ipsy simultaneously.

In May 2014, Michelle Phan partnered with Endemol Beyond USA to work on a new project. They tried to build a talent network to feature people from YouTube to create content for millennials. The ICON network was dedicated to lifestyle, entertainment and beauty. It ultimately launched in March 2015 online and on television through Roku.

Michelle Phan published a book in October 2014, in collaboration with Random House. This lifestyle book called “Makeup: Yout Life Guide to Beauty, Style and Success - Online and off” had a huge success amongst fans and the public.

In 2018, Phan founded the start-up Thematic, a company specializing in licensing music.

Being such a well-known figure can’t come without a downside. In July 2014, Ultra Records filed a lawsuit against Michelle Phan in the United States District Court for Los Angels for copyright infringement, relating to the music used in her YouTube videos.

Phan’s lawyers publicly stated that she received permission from Ultra Record to use their music and filed a counter-lawsuit against Ultra Records on September 18th, 2014, in the United States District Court for the Central District of California.

The whole conflict ultimately ended in August 2015. Both lawsuits were dropped, and the parties agreed to settle out of court. The terms of the agreement were not made public.

You may cause many arguments if you ask who was the world’s first influencer, but you would definitely hear Michelle Phan amongst the number of possibilities.

The rise and fall of EM Cosmetics started in 2015 when L’Oreal partnered with Michelle Phan. EM Cosmetics were supposed to be a beauty product for Phan’s young fanbase, but many felt the quality didn’t live up to its price. For example, people started complaining that the makeup is too chalky and it leaves a mess in their makeup bags. EM Cosmetics were marked as a luxury item, but the result didn’t feel like it.

Michelle Phan was struggling with her mental health and got preoccupied with her own fame. As a young influencer experiencing the first failure of her products, after the massive success of Ipsy, Phan started suffering from depression.

Michelle Phan struggled to keep up with the life of an influencer after some of her fanbase turned their back on her. Comments under her videos began to roll about the quality of EM Cosmetics.

Michelle realized she spread her attention into too many projects. She felt burned out, overwhelmed and decided she needed a break. Without saying anything, she flew to Switzerland for a reset and started travelling all over Europe and Africa. After finding her inner peace, Phan returned to LA and bought a L’Oreal share of EM Cosmetics. Phan resigned from Ipsy and decided to relaunch EM Cosmetics at her own pace.

Michelle’s breakdown didn’t happen at once. She slowly posted less and less all over social media until, eventually, her fear of becoming irrelevant got outweighed by her need for a break. “I packed a suitcase -my whole life - in one piece of luggage, and I just left. I didn’t even tell anyone. My business partners, board members, everyone was freaking out …” She used this time to visit Europe and Africa “all my worries and struggles all of a sudden felt like nothing”, she shared after she got back.

How much does Michelle Phan earn? Net Worth!

Michelle’s Phan estimated net worth is estimated on crazy $50,000,000. Her makeup YouTube tutorials got crazy popular and gained her over multiple billion views. Although this might seem a lot, YouTube is nowhere close to her main source of income. After becoming widely popular on YouTube, doors to more lucrative offers opened.

Michelle was even featured in a variety of magazine articles, including Sun-Sentinel, Seventeen magazine, Forbes Magazine, in St. Petersburg Times, as well as in NYLON. This could be dated as of the start of her online influencer career. It presented yet more revenue streams.

Her first huge deal was with Lancome, a big makeup company. Phan partnered with Lancome to advertise their products in her makeup tutorials.

The majority of Michelle’s net worth has come from several deals with Lancome and with L’Oreal hair products. More clicks on YouTube meant more revenue money, but Michelle didn’t stop.

She co-founded Ipsy, a subscription company that sends you a beauty bag every month. Ipsy was a major addition to her net worth.