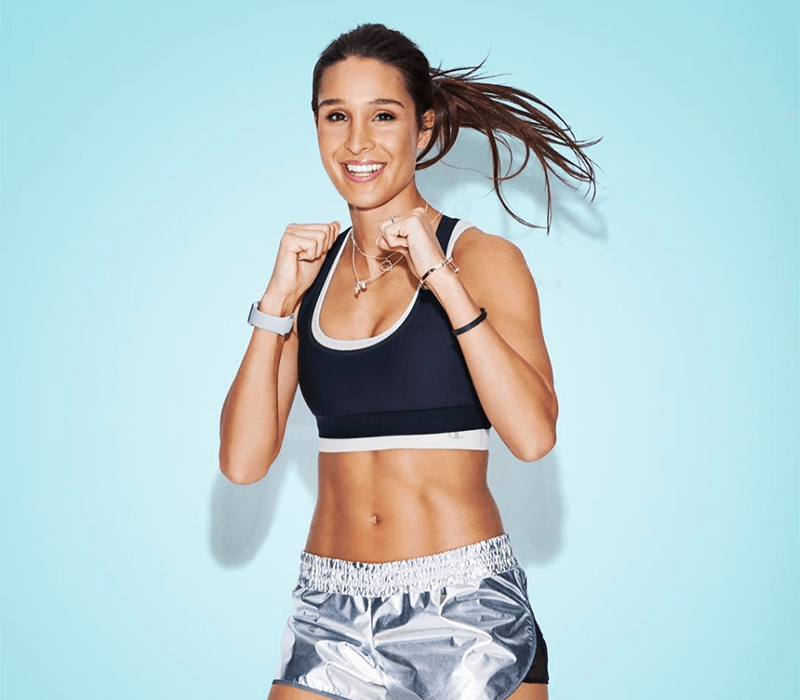 Who Is Kayla Itsines?

Kayla Itsines was born on May 21st 1991. She is an Australian fitness enthusiast, author, personal trainer and social media influencer. Kayla is co-founder of Sweat, a fitness app that helps you create your daily fitness routines and co-creator of High Impact with Kayla, previously known as Bikini Body Guides. High Impact with Kayla are fitness e-books to help you plan your exercises and guide you towards a healthy lifestyle.

Kayla Itsines is known as a personal trainer and has helped thousands of women worldwide since 2008. Her app became the most earning fitness app in 2016.

Kayla is also an influencer and has incredible reach throughout social media. She regularly posts on her Instagram, YouTube, Facebook and TikTok. Her most popular platform is Instagram, where she has more than 13 million followers.

Kayla Itsines is the daughter of Anna and Jim Itsines, who were both teachers. Kayla has Greek heritage, and most of her food has a Greek theme. Leah Itsines is Kayla’s younger sister, personal trainer and food stylist.

When Kayla started taking fitness more seriously, she already played basketball and other sports. Her sudden interest in fitness was caused by her doctors. Due to being underweight and sickly, Kayla was told that she might suffer from fertility problems due to endometriosis. After doing some digging on the Internet, Kayla found out that she can preserve her fertility if she stays healthy and fit. At first, she was overwhelmed, but her personal trainer told her to “just start somewhere”, and she followed his advice.

Kayla Itsines dropped her plans of becoming a beauty therapist. She graduated from the Australian Institute of Fitness at the age of 18 as a Master trainer.

Kayla used to date videographer Mitch G before she started dating Tobi Pearce. They met together at the gym and have lived together since 2012, and got engaged in April 2018. Kayla and Tobi have one daughter together. Arna Leia Pearce was born in May 2019. After eight years together, Kayla and Tobi announced their separations. “Tobi and I have come to the difficult decision to separate as a couple. We will always be family and remain good friends and devoted parents to Arna”. They officially split on August 21st, 2020.

The Career of Kayla Itsines

Kayla Itsines started working at a women’s gym in Adelaide as a personal trainer. After a while of working in the gym, Kayla realised her clients were not achieving their goals which led to them giving up. Soon she found out that clients need these small victories for them to feel good about themselves, which makes them want more. She started offering aerobic exercise as a substitute, and her clients loved it. Kayla tackled all the outcomes most women want from training, flatter abdomens, smaller inner thighs and more toned arms while also repulsing their concerns about becoming too bulky.

Most importantly, Kayla realised that her clients were more interested in working out at home but didn’t have the proper equipment or machines. Therefore, she designed fitness programs with minimal required equipment that gradually increases in difficulty.

Kayla trained their sister’s friends who wanted to play netball at their high school. She personally trained them, focusing on powerful legs, building core strength and advised them on nutrition. Above all, this was when she started taking “before and after” pictures of her clients. Something her Instagram account is known for. It was actually Kayla’s 12-year-old cousin who advised Kayla to use Instagram as a way to organise these photos.

It didn’t take long before Kayla started being flooded with requests for help from people all over the world. Her then-partner, Tobi Pearce, advised Kayla to compile her fitness routine into e-books that could be sold online. Kayla and Tobi founded together with the Bikini Body Training Company, now known as High Impact with Kayla, with Kayla Itsines as director and Tobi Pearce as CEO. In January 2014, Bikini Body Training released its first two guides. Firstly Kayla’s fitness routines and workout advice. Secondly, nutrition information from Anne Schneyder and Julie Dundon, Australian nutrition professionals. These guides reached over one million downloads in ten months.

Bikini Body Training program consists of 28-minute high-intensity fitness programs three times a week. Its meal plans were designed as 1,200 calories per day, which seems like not that much and were updated to 1,800. This program is targeted at women, but it’s not about muscle gain or weight loss. It’s more about achieving a particular figure because Kayla thinks she understands women’s fitness goals and health.

“I’m a woman, too, and sometimes we wake up with our period or headaches with no motivation. It’s hard! So you have to remember your ‘why’ and what it was that made you want to take that leap. Meditate, think about it and then work out and take on your day! You’ll feel so much better. I know it’s cliché, but you never regret that workout.”

Kayla Itsines filed a lawsuit against other personal trainer’s Harley Johnstone, and his partner Leanne Ratcliffe. They both posted comments on their YouTube channels. Harley “Durianrider” Johnstone claimed that Kayla Itsines uses steroids. His other half, Leanne “Freelee the Banana Girl” Ratcliffe, stated that the BBG eating plan required its users to starve. Some people said Leanne was influenced by Harley. They broke up in 2018 while Leanne Ratcliff exposed some disturbing facts about Harley Johnstone involving harassment and manipulation. Kayla Itsines stated these allegations are lies and obtained an injunction further preventing the publication of the videos. On March 23rd, Kayla reported this complaint at the Supreme Court of South Australia. Judge Withers proceeded this case to trial, but things got settled off the court before the trial even started.

Kayla Itsines created the Sweat with Kayla app in November 2015. She faced significant criticism from customers that complained about the app being too costly. They didn’t like the fact that they already paid for e-books, and now they need to pay the full subscription fee. Things eventually settled after Kayla lowered the price for $1 for the first month, only for the customers who had already bought the e-books.

How much does Kayla Itsines earn? Net worth!

Kayla Itsines is one of the fitness influencers in the world. How did she achieve that? It’s actually pretty straightforward. Kayla put herself out there, documented her progress and results. Most Importantly, Kayla demonstrated the improvement of her customers with before and after photos. She built the entire product around helping her customers to get in shape and get better overall health.

Kayla’s Instagram followers soon became customers after launching Bikini Body Guides. These e-books reached a million downloads in less than 8 months. Bikini Body Guides consist of eating and nutrition plans, recipe books and workout routines. She doesn’t believe in cutting out anything (except alcohol) unless it’s for an ethical or health reason.

“My approach focuses on the journey, not the destination. I advocate a healthy and maintainable lifestyle that is not a quick fix or a fad. I never guarantee anything unless the client is willing to work hard.” Her Instagram focuses more on her followers and their fitness journey.

Years later, Kayla launched the “Sweat app”, also known as “Sweat with Kayla”, which became the most downloaded app in 2016. Since its release, the Sweat app has been downloaded more than 30 million times and generated over $99.5 million.

“I remember running one-on-one sessions in my parents’ backyard and them growing into bigger group sessions in the local park here in Adelaide,”

According to the Australian Financial Review, Kayla Itsines had an estimated net worth of $209 million in 2020. Kayla and her ex-fiance announce that they are selling Sweat to iFIT for $400 million. “I will still be your trainer, and all of our programs are not changing or going anywhere.”

As of 2021, Kayla’s net worth is estimated at around $400 million. Sweat with Kayla is now known as Sweat, but nothing really changed. This app is gonna become a standalone brand in the iFIT family.

“I want to say thank you to anyone who downloaded my original PDFs, shared a Sweaty selfie with me on Instagram or who came to one of my Bootcamp. We have all come a long way together, but this is only just the beginning.”