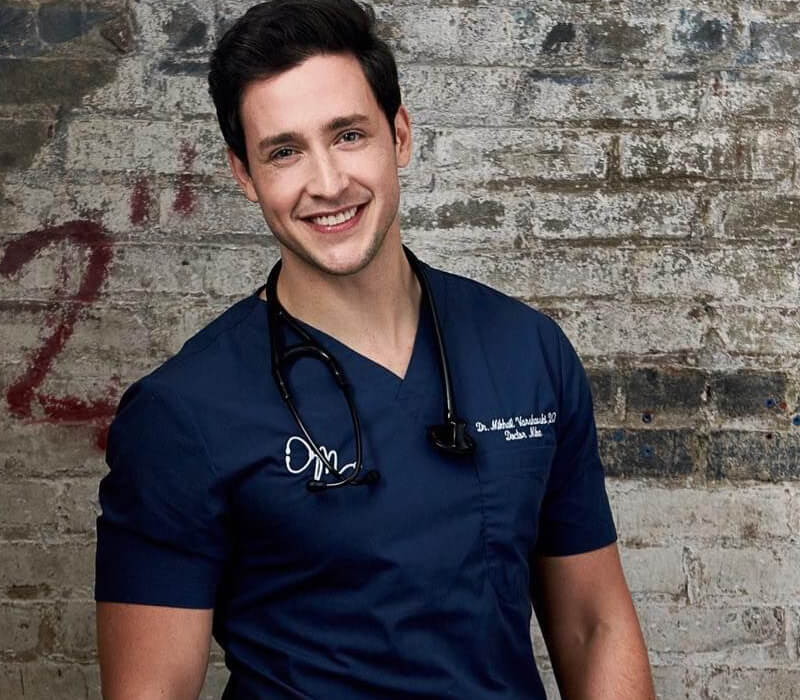 Who is Doctor Mike?

His Instagram account went viral after being labelled The Sexiest Doctor Alive thanks to his impressive fashion sense and physique. Mike was featured in BuzzFeed and People magazine’s 2015 issue.

In the same year, he established a foundation called ‘Limitless Tomorrow’ to help students with scholarships.

Mike was nominated at the 10th Annual Shorty Awards for “Breakout YouTuber of the Year.” He was nominated along with huge personalities such as Peter McKinnon and Will Smith.

Mikhail “Mike” Varshavski was born on 12th November 1989, in Saransk, Russian SFSR, Soviet Union (Russia). Mike’s father, who was a physician and his mother, a mathematics professor, migrated to Brooklyn when he was only 5 years old.

Mike’s father, who used to be a mathematics professor, started sweeping floors for minimum wage in Brookly. Meanwhile, his father attended medical school for the second time since his degree from the Soviet Union was not valid in the USA. Many people thought his father was not intelligent because he didn’t speak English very well.

It wasn’t hard for Mike to learn English since he moved to the US very young. Although on his first school day, he answered every question from his teacher with “yes”, “no”, and “maybe” before his teacher realized he didn’t speak English.

Mike has one older sister, Dasha and three nephews Ari, Steven and Daniel. His family had a lot of financial struggles. They lived in a one-bedroom apartment, and Mike even shared that buying a bag of chips wasn’t always easy as he had to plead with his parents even for a quarter.

Doctor Mike was a nickname given to Mike by his friends who came to him with his sports injuries. Mike liked his father’s relationships with his patients and decided to choose the same path. He decided to become a doctor. Mike attended Staten Island high school and later enrolled in the New York Institute of Technology. In addition, Mike got accepted for an accelerated seven-year combined track for a bachelor’s degree in life sciences and a doctoral degree in osteopathic medicine.

Mike’s mother passed away during his first year of medical school due to leukaemia. At this time, Mike was living alone, but he decided to move back to his father’s home after his loss.

Mike owns a Siberian Husky named Roxy. His day starts with a run alongside his pet dog. Mike is an enormous fitness enthusiast and loves playing sports such as basketball and tennis. He has a black belt in ‘Taekwondo,’ a Korean martial art.

He is very close with his family. On 27th January 2019, Mike featured his nephews in a YouTube video, “Kids Ask Awkward Health Questions.”

Doctor Mike is involved in a lot of charity works. He often uses his social media to raise money for charitable causes. Mike shaved his head to display his support towards “St. Baldrick’s children’s cancer organization in one of his videos.” He then urged his followers to donate money and pledged to match the highest donation made through Instagram, Twitter, and Facebook. He also comes up with inspiring tweets to motivate and encourage his fans and followers.

The love life of Doctor Mike

Doctor Mike shared that he had his first kiss during Middle school with a girl named Sky. It happened in Brooklyn in front of a small grocery shop during rain.

Doctor Mike is currently single, and it is not known if he is dating anyone.

As of his past relationships, in 2015, Doctor Mike dated model and actress Pia Alonzo Wurtzback. She was also crowned Miss Universe 2015. They broke up in 2016.

After splitting up, Mike was rumoured to have dated Fox news reporter Jennifer Lahmers. This rumour was further fueled when Jennifer shared a snap of Mike spending Christmas with her. The two dated between 2016 and 2017.

Doctor Mike stated that he doesn’t believe in relationships based just on physical attraction.

The career of Doctor Mike

In early 2012, Mike created his Instagram account to document his life as a medical student. He shared that you cannot have a life in medical school. As much as it is hard to believe, Mike struggled to talk to girls and didn’t handle well speaking in public.

He was determined to overcome this obstacle, put himself out of his comfort zone and shared that he read the book “How to Win Friends and Influence People” by Dale Carnegie.

In 2015, Mike had already established a decent audience, but it was nowhere near what happened after. It all started when Buzzfeed published an article about him, “Um, You Really Need To See This Hot Doctor And His Dog”, that highlighted his relationship with his dog and good looks. His Instagram went viral and more followers kept coming.

Mike quickly started helping other students with his Limitless Tomorrow organization that provides scholarships. In January 2016, Mike raised money for his organization in collaboration with dating app Coffee Meets Bagel and auctioning experiences with himself through social media. This campaign raised over $100,000 for his foundation.

On 18th August 2016, Mike created a self-titled YouTube channel to inspire, motivate and post comedy-education content. Some of his videos include ways to reduce stress and cancer risks.

He was invited to guest-star in ABC network television shows such as “Good Morning America” and “Nightline”. Mike even appeared in popular talk shows like “Today”, “Rachel Ray Show” and “The Doctors”.

In 2017, Mike gave a TEDx Talk on “The epidemic of the ‘I Know It All’ expert” at a TEDxMonteCarlo event. This video has almost 3 million views as of 2021.

The controversy of Doctor Mike

Doctor Mike is one of the people who think the Coronavirus pandemic situation shouldn’t be taken lightly. He often incentivizes people to stay at home and be responsible in his videos.

Despite that, he was later shown to be very hypocritical as he attended a beach party himself.

After that, Mike uploaded an apology video. This video was severely criticized because it got uploaded on his second channel. There is no way to assume how the public reacted because visibility of likes has been disabled by YouTube. One certain thing, the comments weren’t pleasant.

How much does Doctor Mike earn? Net worth!

Doctor Mike’s net worth is estimated to be $7 million. His income comes from his two YouTube channels, Instagram account and last but not least, Medicine Service life.

In addition, Mike has an Instagram account with nearly 4.5 million followers. He posts almost daily about his doctor and fitness life. Mike also showcases various products from his own clothes merch.