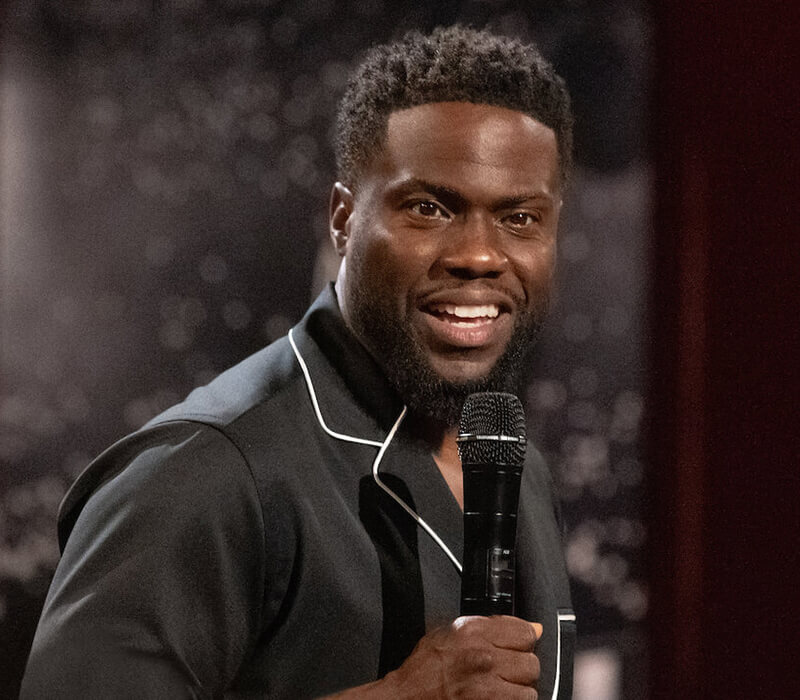 Who is Kevin Hart?

Kevin Hart is an American stand-up comedian, actor, internet personality and social media influencer. Kevin is most known for his hilarious stand-up comedy shows. He became famous after Judd Apatow cast him in one of his TV shows, which led to exposure and multiple movie roles.

He has single released multiple comedy albums, starred in blockbuster films and even released one of his comedy shows on Netflix.

Kevin’s full name is Kevin Darnell Hart, and he was born on 6th July 1979 in Philadelphia, Pennsylvania. He was raised by a single mom named Nancy, who worked at the University of Pennsylvania. Kevin has one older sibling whose name is Robert.

Kevin didn’t grow up with his father because he was a cocaine addict. His father was in jail for Kevin’s whole childhood. Kevin used humour as a way to cope with his troubled family life. After Kevin’s dad Henry Robert Witherspoon recovered from drug addiction, they fixed their relationship. “My dad said I was supposed to be on drugs. I was like, ‘Dad, shut up, but then I thought about it, and it was stupid, but it made sense. He was saying that basically, he was my example to never go down that road.” Kevin also often portrays his mother as a loving yet intimidating woman. She died from cancer in 2007.

After graduating from George Washington High School, Kevin decided to attend the Community College of Philadelphia. He later dropped out and moved to New York City to chase his dreams. Kevin worked as a shoe salesman and pursued his dream of becoming a stand-up comedian.

Kevin Hart was married to Torrei Hart before they filed a divorce for irreconcilable differences in February 2010. Kevin requested joint custody of their two children, daughter Heaven Leigh, born on 22nd March 2005, and son Hendrix, born on 8th October 2007.

On 18th August 2014, Kevin proposed to Eniko Parrish, and they married on 13th August 2016 near Santa Barbara, California. On 21st November 2017, the two had their first child, son Kenzo Kash. On 15th December 2017, Kevin publicly admitted that he cheated on his wife when she was pregnant with their son. On 29th September 2020, Kevin and Eniko had their second child, daughter Kaori May.

The controversy of Kevin Hart

In 2018, Kevin Hart was supposed to host the 91st Academy Awards. After some homophobic Tweets from 2010 and 2011 resurfaced, Kevin needed to step down. Kevin claimed he was different back then, grew up as a person and apologized to the LGBTQ community.

Openly lesbian comedian Ellen DeGeneres expressed public support for him and asked the Academy Awards to reconsider Kevin’s decision to step down. However, after Kevin got additional backlash for an insincere apology, he announced he would not host the awards anymore. That year, the 91st Academy Awards had no host.

On 14th April 2013, Kevin Hart was in suspicion of drunk driving after his black Mercedes nearly collided with a tanker truck on a Southern California freeway. Kevin failed a field sobriety test and was booked for misdemeanour DUI. On 5th August 2013, Kevin Hart got sentenced to three years of probation after pleading no contest to one count of driving under the influence of alcohol.

On 1st September 2019, Kevin Hart was a passenger in a 1970 Plymouth Barracuda that went off Mulholland Highway and rolled down an embankment near Calabasas, California. Both Kevin and the driver suffered significant back injuries. Kevin was released from the hospital ten days later and continued recovery at a rehabilitation facility.

The career of Kevin Hart

Kevin’s first comedy gig was at The Laff House in Philadelphia under the name of Lil Kev the Bastard. It didn’t really go well. He got booed off the stage several times, and the audience threw a piece of chicken at him one time. Kevin continued to enter comedy competitions throughout Massachusetts, and audience receptions of his performances eventually improved.

In 2001, Kevin drew the attention of Judd Apatow that cast him in a recurring role in the TV series “Undeclared”. The show didn’t really catch up and only lasted one season. What is most important, it exposed Kevin and officially marked the start of his career.

In 2008 Kevin released his first stand-up album, “I’m a Grown Little Man.” He released his second comedy album, “Seriously Funny,” in 2010 and followed it up the following year with “Laugh at my Pain.” In 2013, he released “Let Me Explain”, and in 2016, he released “What Now?” He has embarked on several national tours, and one of his shows was recorded for a Netflix special.

In 2015, Time Magazine named Kevin as one of the 100 most influential people in the world on their annual Time 100 list.

He starred as himself in the lead role of “Real Husbands of Hollywood.”

In 2017, Kevin Hart and Tommy John appeared in an underwear commercial for Macy’s.

In March 2009, Kevin Hart joined Twitter. As of 2022, he accumulated over 37 million followers and more than 41,300 Tweets. Kevin is very active on Twitter, even multiple times per day. He advertises his latest products and shares his personal opinions.

Kevin Hart is highly popular on Instagram, where he has over 136 million followers. There is a large variety of content on Kevin’s Instagram posts. You can find anything from high-quality modelling pictures to photos from his everyday life and hilarious reels. Kevin gets anywhere between 200,000 and 1.5 million likes per post.

Kevin is also widely popular on Facebook with over 36 million followers. This platform primarily includes Instagram and TikTok re-posts.

On 9th December 2019, Kevin Hart created his TikTok account. As of 2022, Kevin gained over 27.5 million followers and more than 136 million likes. He is not your regular TikToker, and most of the time, he just makes fun of TikTok. Kevin seems inactive as he didn’t post anything for the past 2 months.

How much does Kevin Hart earn? Net worth!

As of 2022, Kevin Hart has an estimated net worth of roughly $200 million. Kevin is one of the highest-paid entertainers in the world.

Kevin Hart has been playing poker since 2010. He entered significant tournaments such as the WSOP, cashing in one event for $4,783 in 2014. He also plays cash games, like the ones organized by PokerStars, and actually became their Brand Ambassador in 2017. He was featured in PokerStars ad campaigns and promotional content alongside Usain Bolt.