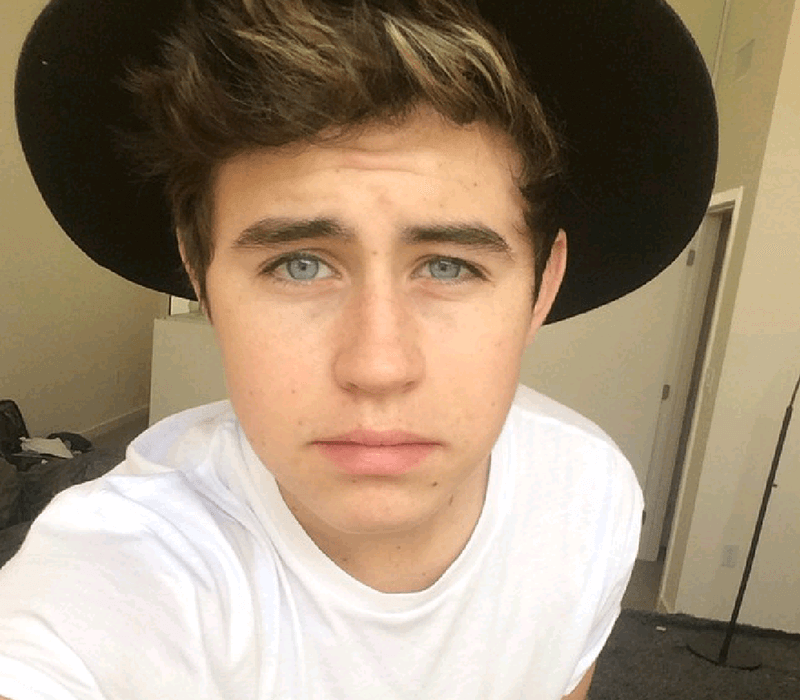 Who is Nash Grier?

Hamilton Nash Grier was born on December 28th 1997. This 24-year-old young man is an American personality, comedian and social media personality. Nash is known for his comedy gags on now closed platform Vine. This platform was used to post 6 seconds long loop videos. In fact, Nash was the second most followed Vine creator with almost 13 million followers, 1 million above Lele Pons and 3.5 million behind KingBach.

With Vine closing out, Nash moved to other social media such as YouTube, Facebook, Instagram, Twitter and TikTok. Nash Grier also dove into the TV shows world, created his own clothing brand, featured in a movie and most importantly, became the advertisement face of popular brands.

Hamilton Nash Grier was born and raised in North Carolina. Nash’s parents are Elizabeth Floyd and Chad Grier, who is also one of his managers. He is the middle child of the three Grier brothers.

The youngest one, Hayes Grier, is a fellow ex-Viner and YouTuber. In August 2021, Hayes was arrested for an assault and robbery with his friend Luke Foushee. This event happened only 2 days after a photoshoot with PETA. There wasn’t a closure on this case or any statement from Hayes so far.

The oldest brother, Will Grier, is a football quarterback drafted by Carolina Panthers in the 2019 NFL draft. Same as his father, Will is one of Nash’s managers.

After his mother divorced Nash’s father, she married John Floyd. Nash has one half-sister out of this marriage. Skylynn Floyd appeared in several videos and became a huge hit. By the time she was 5 years old, her Vine account had already 1 million followers.

Nash Grier started dating Taylor Giavasis in 2015. They announced the birth of their first child in September 2019. His son Malakai Grier is a star of his TikTok’s.

Nash Grier is majorly involved in various charity campaigns. For example, Nash participated in the Thirst Project, which helps to build wells in countries that don’t have access to clean and safe drinking water. Through his social media, Nash raised over $125,000 for this project.

The career of Nash Grier

Nash Grier was still attending Davidson Day School when the mobile app Vine rose to popularity in 2013. This 16-year-old young man started creating 6-second long entertainment videos for his friends. His audience quickly became wider, and this hobby turned into a passion. Nash became the second most successful Viner in only two years.

As his fame rose, Nash started collaborating with other Viners. Nash joined a newly formed group called Meet and Greet Convention, more known as Magcon. This group was created in October and became widely popular as “a boy-band phenomenon without the band.” Magcon held events where people could meet with Internet personalities and Vine stars such as Nash Grier, Hayes Grier, Matthew Espinosa, Jack and Jack, Cameron Dallas, Mahogany Lox, Carter Reynolds or Shawn Mendes. These shows are one of the reasons why their members got more popular and attracted more followers to their channels.

Their group broke up in April 2014 after multiple disagreements between their managers.

Nash got enough attention to expand his brand, such as social media apps and games Mobli, Cash Dash and Challenged. In collaboration with his brother Hayes and Cameron Dallas, Nash designed their own clothing line, “UnitedXXVI,” for Aéropostale. Fans of this brand didn’t like the collaboration due to Nash’s controversial past. Buzzfeed stated on this event, “The backlash highlights the challenges brands face in working with today’s new breed of celebrities in a supremely competitive landscape.”

Nash Grier learned how to edit his videos himself and even shared that his “apparent spontaneity” is actually shrewdly crafted and scripted, with clips refilmed many times and sometimes edited for hours.

Nash Grier started his acting career in 2015. His first job as an actor was in “Janoskains: Untold and Untrue.” A couple of months later, Nash earned himself a voice acting role in the movie “Air Bound.” He got his first lead acting role in the film “Outward”, collaborating with his friend and fellow internet sensation Cameron Dallas.

Nash got his first television series job in 2016. He performed as Ryder in a television show, “the Deleted.” In the same year, Nash starred as Tom in the show High School Cupid, a Cupid Inc.

The controversy of Nash Grier

With that much popularity, no one should be surprised Nash stepped on some toes and overstepped some blurry boundaries. Some of Nash’s Vines were labelled as sexist, racist or homophobic.

When Nash released his Vine “How Asians name their kids”, many people didn’t like it. Nash was forced to face massive backlash. Same thing when Nash released a video about tips for women on how to behave to attract men. This video was backlashed as well, and people called him sexist. Another time Nash released a video that offended the whole LGBT community. Nash responded to OraQuick at-home oral HIV that said, “Testing for HIV. It’s not a gay thing.” He posted his Vine in which he said, “Yes, it is! Fag!” Nash was smart enough to delete the Vine, but it resurfaced one year later, in July 2014. This time, Nash had more social media presence, and his audience was highly critical about this stunt. “I was young, ignorant, stupid and in a bad place. I’ve moved on and learned from my mistakes, and I am so truly sorry to anyone I have offended.” Nash Grier apologized for every one of those incidents on Twitter and even started using #Notracist to give people a better understanding of not taking these videos too seriously. It didn’t really work, and Nash lost a significant amount of fans. People started being worried that his career could end before it entirely took off, but that really wasn’t the case. Nash Grier is comfortably sitting on millions of fans that still get his jokes.

How much does Nash Grier earn? Net worth!

Nash Grier has an estimated net worth of $3 million. Back in the day when Vine was a thing, brands would pay anywhere from $25,000 to $100,000 to advertise their products on his channel. That is no surprise, considering Nash was second most followed on the platform with almost 13 million followers. He also owned a second Vine account, “Nash Grier 2,” where he shared less scripted Vines.

Nash Grier also owns a self-titled YouTube channel with more than 4.5 million subscribers. He joined YouTube in 2013 and started rapidly gaining followers, almost 100,000 per week. Most of his videos were comedy clips, video editing tutorials and tips for upcoming social media personalities. As of 2021, Nash mostly posts vlogs with his family or videos of his son.