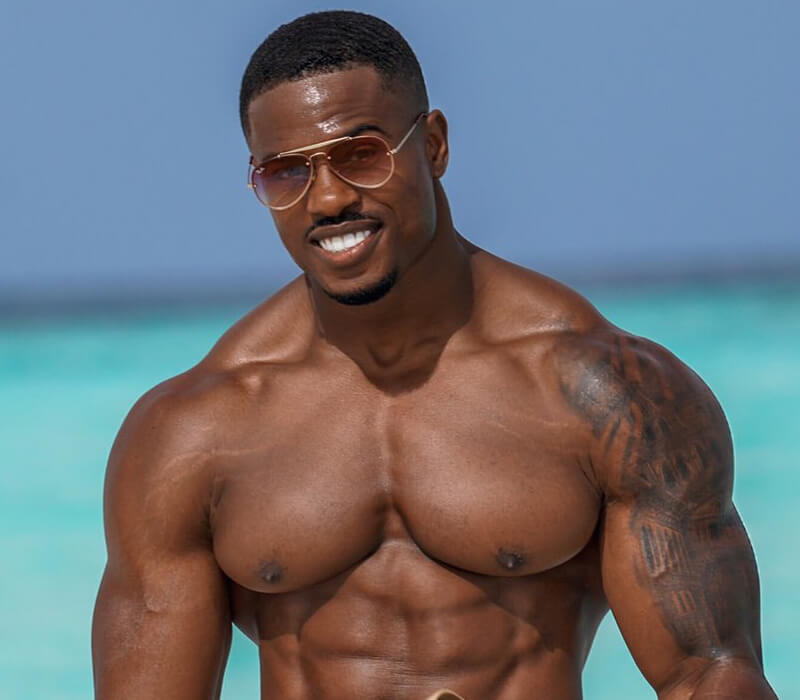 Who is Simeon Panda?

Simeon Panda is a British fitness trainer, social media personality, bodybuilder and fitness brand entrepreneur. He achieved Musclemania Pro status in 2013 when he won European Championships and often stares as a judge in various bodybuilding and fitness shows. That is to say, Simeon is very strict about his routine, diet and thanks to his impressive body, he got featured on the covers of multiple magazines.

Simeon is also a proud sponsor of the MyProtein supplement. He developed his own sportswear and fitness brand “SP Aesthetics” and trademark lifting straps “Just Lift”.

Many people think of Simeon as a young Arnold Schwarzenegger. Simeon even has the same dream as Arnold. He wants to move to the US in the future and pursue his dream as an actor.

Simeon Panda was born on May 28th, 1986, in London, England. He has five siblings, four brothers and one sister. His older brother Samual Panda runs a company with him called SP Aesthetics that sells fitness clothing and accessories.

It’s hard to believe that Simeon Panda was just a tall and skinny 16 year old. Don’t get me wrong, he always had a good physique and played rugby and basketball. He just wasn’t as eye-appealing as he is today. The fact that he was really tall made him seem even skinnier.

It all started when he started getting advice from a friend about how to start working out. Simeon grew interested in bodybuilding, and instead of being devastated after training, he started looking forward to the next one.

Simeon Panda used to work in a software company before he fully transitioned into a fitness influencer. During his University days, he also worked as a doorman in a nightclub. Being his size has some benefits but also brings a lot of controversies. He was accused of using steroids multiple times but always stated that all his muscles are gained naturally.

Simeon Panda is currently in a relationship with a former model, lifestyle blogger and most importantly, fitness enthusiast Chanel Brown. They didn’t actually click together when they met in 2012. Things changed when they went on a date almost two years later, in 2014. On multiple occasions, Simeon and Chanel were named the fittest couple, including Menshealth in 2017 and often post photos of working out together. On June 13th 2019, the two got engaged at El Matador Beach on Channel’s birthday.

The career of Simeon Panda

As said before, Simeon was really skinny and tall, 16 years old, with a good physique. You could call the start of his fitness career a complete accident. One of his friends who had already had fitness experience gave him advice for some simple at-home workouts.

Simeon officially started his weight training in 2002 with one dumbbell that he switched between hands. Understandably, your body doesn’t change overnight, but thanks to his genuine effort and perseverance, Simeon started improving.

In the beginning, he didn’t even have any actual training regime or diet. It was just a genuine effort. As time went by, Simeon gained more experience and became addicted to fitness. He started building his own fitness routines and gained enough knowledge to compose a diet program.

What once started as a genuine effort trying to look more muscular became a hobby and passion and grew into something more significant. Fitness became Simeon’s profession and even enabled him to compete in various professional bodybuilding competitions.

Simeon gained Musclemania Pro status when he won the European Championships in 2013. He even starred in various fitness magazines such as Train Mag, Muscle-Insider, Fitness RX, MuscleMag and Muscle & Performance. In addition, Simeon appears as a judge at bodybuilding and fitness shows worldwide.

So what makes this bodybuilder so unique? He decided to advance his business, sponsored MyProtein and even started his own companies. Just Lift is a trademark for lifting straps, and SP Aesthetics is his own fitness and sportswear brand that he leads with his older brother. Most Importantly, Simeon grew a large social media audience watching his progress. He has over 8 million followers on Instagram and more than 7 million followers on Facebook. Simeon regularly posts daily workout photos or photos with his wife.

Simeon Panda shared that he would like to move to the US and pursue an acting career. He already had TV experience when he starred on the Australian breakfast television program “The Today Show” in 2014. The same year, Simeon appeared in an interview alongside Lita Lewis on New York’s popular urban radio station “Hot 97”.

Being good at something and arguably the best brings a lot of fans but also many doubters. It’s not uncommon when mistakes from the past resurface after you become famous. This is not the case for Simeon Panda, but many people cannot believe he got his jaw-dropping body the legitimate way.

People often criticize him for using steroids and compare his body to other professional bodybuilders confirmed for using steroids, including Arnold Schwarzenegger. They just cannot believe that this impressive body could be a result of natural training.

You might think that competitors get tested during the competitions, but as it turns out, the tests are pretty “easy” to beat. This is where Simeon’s social media comes into play. He regularly posted his progress, and it just seems natural on a detailed timeline. Under closer look, his supporters also prove that his physique is nowhere near Schwarzenegger on steroids. Notably, he has remained roughly the same mass since 2006. Another proof is that Simeon doesn’t have the “steroid gut”, which is in simplicity when your waist gets much bigger than it should be.

Simeon himself arranged for a polygraph test and passed it successfully to shut down all the doubters and haters, asserting that he has a naturally built body.

The net worth of Simeon Panda

Simeon’s estimated net worth is roughly $1.2 million. Most of his earnings come from his own companies where he sells different fitness programs, publications, fitness clothing and training accessories. On top of that, Simeon also participates in various bodybuilding shows, either as a competitor or judge. He also owns a share in the MyProtein company.

As a social media influencer with a broad reach, Simeon is estimated to earn anywhere from $35,000 to $45,000 per sponsored Instagram post.