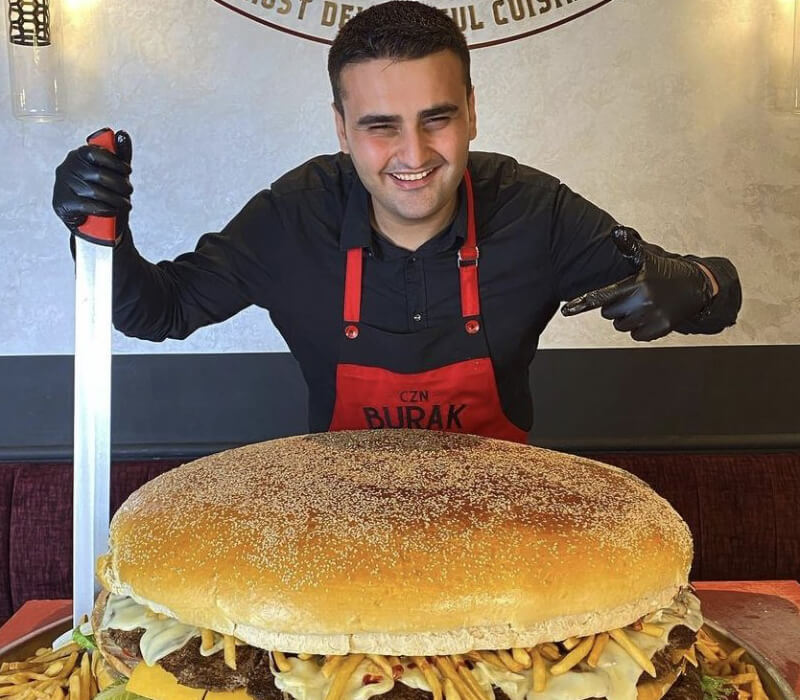 Who is CZN Burak?

Burak Özdemir, better known by his online name CZN Burak is a Turkish chef and restaurateur known for his unique cooking style and wholesome behaviour. His preparation and presentation of Turkish recipes while almost always smiling at the camera have made Özdemir an Internet celebrity on platforms such as Instagram and TikTok. He owns the Hatay Civilizations Table chain of restaurants.

Burak Özdemir was born on 24th March 1994 in Hatay, Turkey. Burak’s nickname CZN originates from a frequent mispronunciation of the Cinzano, the name of his father’s textile shop in Laleli. He has two sisters Uğur & Aylin.

When he was just 13 years old, Burak worked alongside his grandfather at a restaurant. His cuisine is a blend of Arabic and Turkish.

He grew up in Istanbul, Turkey, and went to a nearby school for his studies. Later he attended the Faculty of Open Education, Anadolu University.

The career of CZN Burak

Chef Burak noticed a significant absence of cooking content on social media. His videos quickly became a viral hit in Turkey and other countries, making him an international culinary star.

Burak’s career really started rolling after he created his first viral video. The very famous dish of his own is the 40-inch Kebab, shared even by 9GAG. One of his most popular videos sees him cooking and baking a whole ostrich.

Moreover, Burak is known for his unique way of creating his videos. He always keeps looking at the camera, not even watching what he is doing.

Burak owns the Hatay Medeniyetler Sofrasi chain of restaurants in Turkey. Chef Burak has six restaurants now in Turkey. The one in Downtown Dubai is the seventh and last outside Turkey.

Burak is known for sharing videos of him cooking large portions of food. He always stares at the camera with a giant smile on his face.

On 11th October 2016, Burak started his YouTube channel. As of 2022, his YouTube account accumulated over 3.5 million subscribers and more than 700 million views. On 2nd March 2017, Burak posted his first YouTube video, “Ekrem abinin payını koparttım :)” where he basically eats in a restaurant and comments on the food. Burak decided to create content with a broader reach than just Turkish. On 15th August 2019, Burak posted “Czn Burak Farkıyla Kuyu Kebabı” that amassed over 160 million views and more than 1.6 million likes. In this video, Burak builds a well and smokes a whole lamb in it.

On 20th January 2019, Burak started his TikTok account. As of 2022, Burak has over 51.2 million followers and nearly 1 billion likes. He is one of the Top 10 TikTokers on the platform. Burak currently sits at 10th spot, 300,000 behind “Michael Le”. Burak is not your regular dancing and lip-syncing TikToker. Most importantly, his content is unique, and he is number 1 in what he is doing.

How much does CZN Burak earn? Net worth!

CZN Burak has an estimated net worth of roughly $7 million. Some sites even claim his net worth might be as high as $11.2 million. His earnings come from different social media accounts that he manages really well. Most importantly, social media isn’t Burak’s primary source of income. He owns six restaurants in Turkey and one in Dubai.