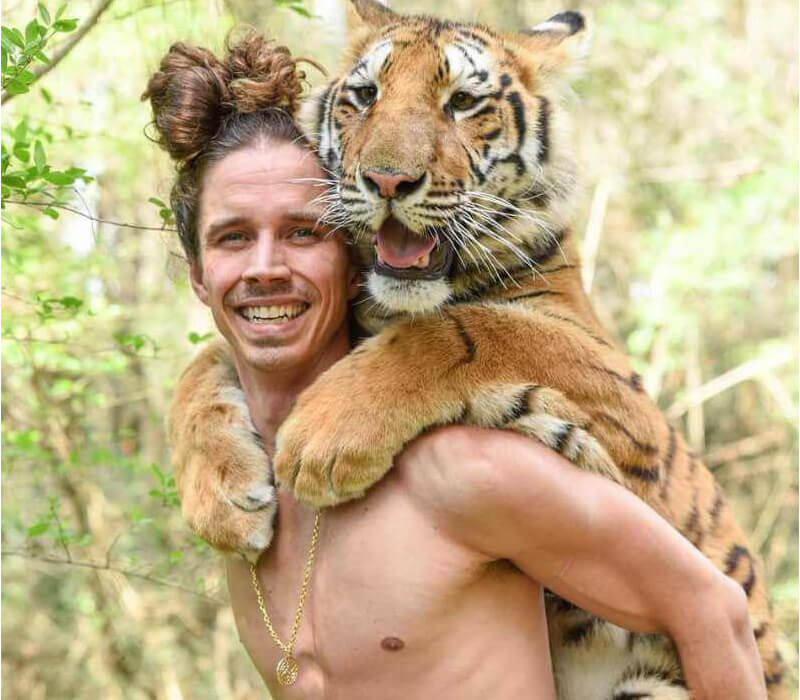 Who is Kody Antle?

Kody Antle is a social media star with a large fanbase on both TikTok and Instagram. Most Importantly, Kody is known best as the son of Doc Antle, an animal trainer and head of Myrtle Beach Safari.

Kody often refers to himself as a “real-life Tarzan.” He lives in South Carolina with his family and works at Myrtle Beach Safari as an animal trainer.

Kody Antle was born on 11th January 1990 in the United States, California. He is a son of Bhagavan Antle, better known as Doc Antle, who founded and directed The Institute for Greatly Endangered and Rare Species (T.I.G.E.R.S.) This park got featured in the popular Netflix series “Tiger King,” and both Doc and his son, Kody, make appearances on the show. After the show, Kody and especially his father came under fire for the harsh workplace environment.

There is not much known about Kody’s mother, other than she was killed in a car crash 20 years ago. Kody has one sibling, older sister Tawny Antle who also works at the Myrtle Beach Safari and calls herself “Queen of the Jungle.”

He often refers to different animals as his brothers and sisters. “I was really lucky I was born into this,” Kody says in an interview with AOL. “My father started the whole thing about 35 years ago with the animals, so I was just one of them born into the litter. I had tigers as my big sisters and brothers, and I had the elephant as my big sister growing up. And it’s just been a whole life filled with animals.”

Kody Antle is very passionate about his work at Myrtle Beach Safari and believes in, “It’s our responsibility to carry animals with us into the future. Myrtle Beach Safari Tours are Open for reservations! You can come to meet my animal family and me. Overnight available stays at our beautiful Safari Manor.”

The career of Kody Antle

Kody Antle became famous thanks to his unique lifestyle and started posting photos and videos as an animal trainer. He was pretty popular even before Netflix’s “Tiger King” even aired.

Kody became popular online by posting photos and videos of wild animals from T.I.G.E.R.S. on Instagram and TikTok. He often refers to the animals as his family. He was raised in the wildlife park and interacted with them growing up. Kody works at the wildlife park as a trainer now.

The controversy of Kody Antle

There is always a lot of controversy around animals living in a closed environment. You can see how much drama it caused between Joe Exotic and Carole Baskin in the Netflix series “Tiger King”.

Kody and his whole family came under fire for their behaviour with animals. T.I.G.E.R.S. has long been a target of wildlife activists for the type of park it is. Activists claim Kody with his family is responsible for the suffering of many tigers in the U.S.

Kody Antle is very successful on social media. He has an Instagram account with over 4.5 million followers. Kody often posts photos with his wildlife friends, most of the time shirtless with tiger shorts.

He is also thriving on Facebook with over 840,000 followers. Kody shares hilarious videos with apes and gorgeous photos with tigers.

Kody Antle doesn’t have his own YouTube channel, although he often appears on the “Myrtle Beach Safari” YouTube channel. This channel has over 750,000 subscribers and over 110 million views. Kody stares in the third most-watched video on the channel “Chimps Pick Coconuts with Kody Antle | Myrtle Beach Safari”, with over 10 million views and over 86,000 likes.

Kodys most successful platform is TikTok. He is part of the top 50 most followed TikTokers and currently sits on 48th spot, only 100,000 behind Indian actress “Arishfa Khan”. As of 2022, Kody amassed over 28.6 million followers and more than 360 million likes. Kody has unique style of TikToks. He is not your regular dancing and lip-syncing TikToker. Kody posts videos with different wildlife, mostly tigers and chimpanzees.

How much does Kody Antle earn? Net worth!

Kody is part of Myrtle Beach Safari that generates $1.3 annual revenue. As of his personal net worth, it is expected as roughly $500,000. With such a massive viewership, Kody generates money through ad revenue.