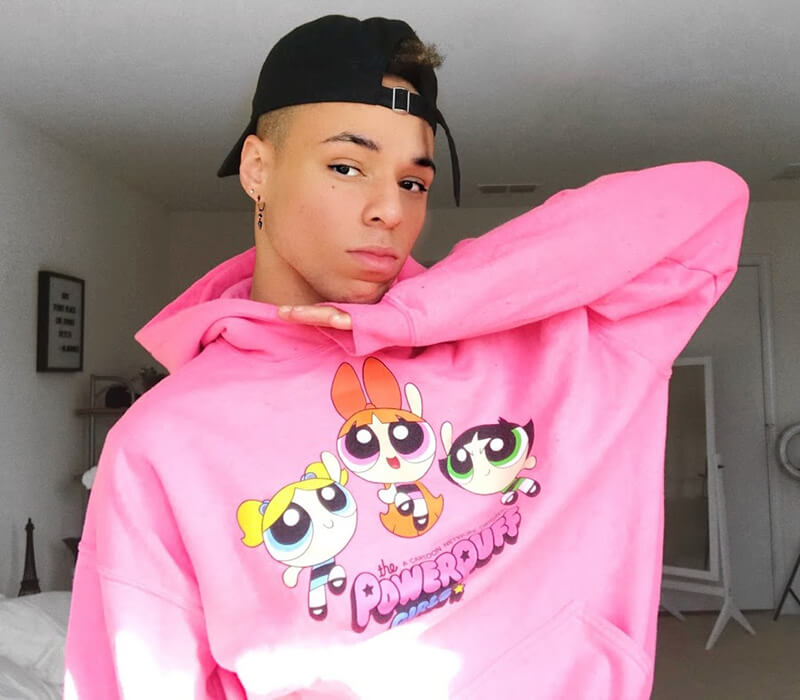 Larri Merrit is an American YouTuber who goes by his artistic name “Larray”. Larray became recognized at the now-defunct app Vine. He produces comedic video content on his YouTube channel. Larray is part of the collaborative TikTok collective known as The Hype House. He is also well known on TikTok and other social media platforms.

Larri Merrit, aka Larray, was born on 22nd July 1998 in Compton, California.

In December of 2020, Larray shared a tweet saying that his dad had been released from jail.

In an interview with AwesomenessTV, Larray answered some of the top searches about him, including a question about how many siblings he had. After some thought (and counting), Larray revealed he has 13 siblings. “Fun fact. I have 13 siblings, and I’m not even joking. My dad...My dad’s um... He’s ‘been around the block’ is the best way I can say that.”

The career of Larray

Larray became popular on the now-defunct social media platform Vine. He gained over 100,000 followers. Larray got his screen name Larray because he used to run a fan page for Miley Cyrus. The term “Larray” is a combination of Larri and Ray.

In 2011, Larray partly transitioned into YouTube but didn’t post anything until 2015. Since 2015, Larray has published a number of videos in collaboration with other social media stars such as James Charles, Charli D’Amelio, and The Dolan Twins.

In addition, Larray has worked with artists such as Ppcocaine and appeared in the artists’ song “3 Musketeers.” At the moment, Larray frequently performs with his housemate Issa Twaimz.

In 2019, Larray was nominated for Breakout Creator at the 9th annual Streamy Awards.

By 2020, Larray had already gathered over 6 million subscribers on YouTube and had more than 12 million followers on the fast-growing video sharing platform TikTok. In the same year, Larray joined The Hype House, a collective of TikTok content creators living and collaborating in Los Angeles for their content.

Larray also took a leap into the music industry and released two singles, “First Place” and “Last Place”. Together, both tracks were on Billboard’s Comedy Digital Tracks chart for 42 weeks. The chart was abolished in January 2020. In addition, the song “Last Place” got more than 40 million views on YouTube by the end of 2018.

The controversy of Larray

On 22nd July 2020, Larray’s friend and fellow influencer Nikita Dragun hosted a surprise birthday party for him. The only issue was that it was during the COVID-19 pandemic.

Famous celebrities such as James Charles and Charli D’Amelio attended this party, which got massive amounts of backlash and criticism as they weren’t social distancing.

Larray later apologized and said he would be more careful. All of the people who came to the party tested for COVID-19 and luckily came out negative.

On 20th October 2013, Larray started his second YouTube channel, “LARRI”, which gained over 350,000 subscribers and more than 3.2 million views. This channel seems inactive, as he didn’t post anything in the last 6 months.

In April 2011, Larray started his Twitter channel “larri”, which gained over 1.3 million followers and more than 12,700 Tweets. Larray is very active on Twitter and posts even multiple times per day.

Larray is also highly popular on Instagram, with 6.6 million followers. He posts anything from high-quality modelling pictures to photos from his everyday life. On his Instagram account, Larray earns anywhere from 300,000 to 1 million likes on any of his posts.

Larray also owns two other Instagram accounts, “larraysloadedmac”, where he advertises his own “Mac and cheese” brand and “girliesxo”, his official clothing brand.

Larray is also widely popular on Facebook, where he has over 16 million followers. He often posts hilarious comedy skits and advertises other videos from different platforms.

On 1st August 2016, Larray started his own TikTok account, “larrayeeee”. As of 2022, Larray gained over 25.5 million followers and more than 750 million views. He is the 65th most followed TikTok content creator, only 200,000 followers behind Kika Kim.

Larray has his songs “Canceled”, “First Place”, “Latina” Last Place”, and “Thanos” also available on Spotify, where he has over 330,000 monthly listeners.

How much does Larray make? Net worth!

As of 2022, Larray has an estimated net worth of roughly $850,000. Larray generates most of his income from ad revenues and sponsorships. His music career also adds up and makes him one of the wealthiest social media influencers.

It is expected that Larray earns as high as $37,000 per sponsored social media post.

Larray also owns two other Instagram accounts, “larraysloadedmac”, where he advertises his own “Mac and cheese” brand and “girliesxo”, his official clothing brand.