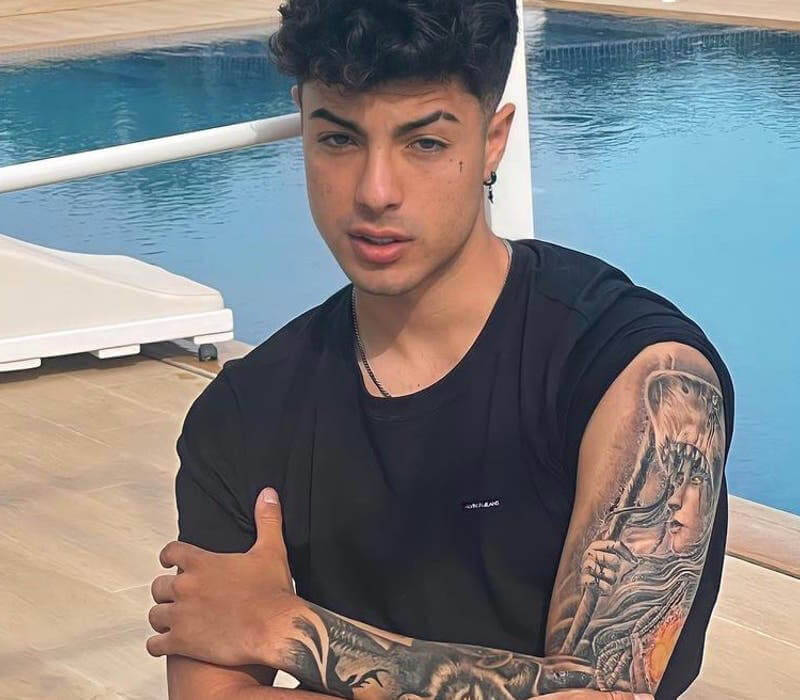 Naim Alejandro Darrechi is a Spanish social media personality, singer and model. His combination of dance and lip-sync videos on the former of the platforms has earned him 27 million fans, as well as the verification crown. Also an aspiring singer, he's released original songs like "Escápate," "Volver a Empezar" and "Te Invito a Volar."

As for Naim’s love life, it is known he dated TikTok sensation Aida Martorell. In 2019, Naim started dated YouTuber Àngela Mármol. They often posted their photos together on their respective Instagram accounts.

The career of Naim Darrechi

Naim Darrechi started to develop his social media following in early 2016. He rose to fame thanks to a variety of vlogs as well as reaction videos to his self-titled YouTube channel. Naim even made videos about his everyday life. His most-watched video used to be when he jumped with a parachute. Naim also uploaded many videos with his girlfriend where they answered questions from his followers about their relationship and their tastes.

It all changed when Naim decided to become a singer and deleted all of his regular-YouTuber content. He's released original songs like "Escápate," "Volver a Empezar" and "Te Invito a Volar."

Naim is very active on TikTok, where he is one of the most followed platforms content creators. He posted a TikTok video inspired by Peyton Wesley, and he is close friends with a social influencer, Victor Perez. He is a dancer and a comedian who usually shares his fashionable outfits and modelling photos over his Instagram.

In 2019, he published a book titled Muy Personal.

In 2020, Naim was nominated for a Nickelodeon Kids Choice Award. He won and was the official Favorite Spanish artist at the award show in 2020.

The controversy of Naim Darrechi

Naim Darrechi faced a large amount of hate when he was accused of “tricking” women to have unprotected sex with him. He could have faced as high as 12 years in prison after he was reported to prosecutors in Spain.

“I find it difficult with a condom, so I never use one,” he told YouTube star Mostopapi. He added that since none of his partners had got pregnant from unprotected sex with him, “I started thinking that I had a problem … So I tell them, ‘Relax, I’m sterile.”

Naim admitted what he did and eventually apologised on Instagram “I want to say sorry from my heart, from my conscience. At times I don’t realise the responsibility that I have, and I get into trouble for my views. I am sorry.”

Irene Montero, the equality minister, said Naim Darrechi may have contravened a new law in which non-consensual sex was was considered rape. “Removing a condom or ejaculating inside (a woman) without consent is now sexual abuse, and the law will recognise it as aggression,” she tweeted.

Naim Darrechi doesn’t create any English content and speaks only Spanish in his videos.

On 16th February 2016, Naim Darrechi created his YouTube channel. As of 2022, Naim gained nearly 4 million subscribers and over 170 million views. Throughout the years, this channel has changed a lot. Naim was creating different lifestyle vlogs, challenges and couple videos. It all changed when he decided to chase his dream to become a singer. He deleted his videos and posted only his singles. On 19th April, Naim Darrechi released his most successful YouTube video, “Naim Darrechi - Escápate (Videoclip Oficial)”. This single amassed over 48 million views and more than 1.5 million likes.

Naim Darrechi is also active on Facebook, where he has over 2.6 million followers. This platform serves primarily for TikTok re-posts.

On 4th May 2016, Naim Darrechi joined TikTok. As of 2022, Naim has more than 27.5 million followers and over 2.4 billion likes. Naim currently sits at 50th most followed TikTok star, only 400,000 behind “Niana Guerrero”. He is your regular TikTok male influencer, often posting lip-sync and dancing videos. His handsome appearance and exercised body earned him a large portion of the female fanbase.

How much does Naim Darrechi earn? Net worth!

Naim Darrechi has an estimated net worth of roughly $1.3 million. Some sites even claim his net worth could be as high as $2 million.

Most of his earnings come from social media platforms through ad revenue, sponsorships and a singing career. Naim could earn as high as $48,000 per sponsored social media post.

Naim Darrechi lives a luxurious life in Spain. He is active in various areas of the entertainment industry.