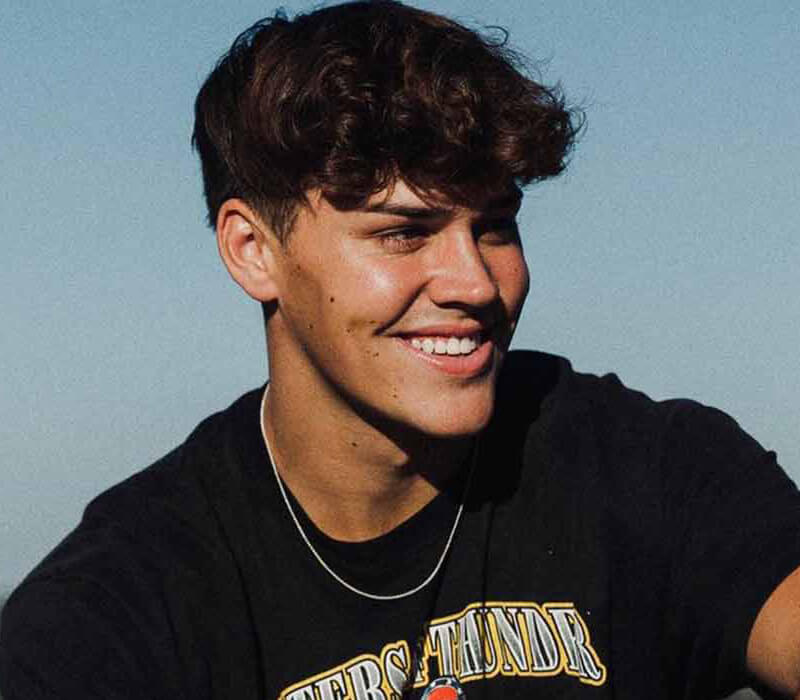 Who is Noah Beck?

Noah Timothy Beck is an American social media influencer, the athlete known primarily for his TikTok, YouTube and masculine body. In 2019, Noah Beck was a midfielder for the Portal Pilots men’s soccer. Noah is also known for his relationship with Dixie D’Amelio, sister of number one TikTok personality Charli D’Amelio.

Noah Timothy Beck was born on 4th May 2001 in Peoria, Arizona, USA. Noah is of British-German ethnicity. He has two older sisters Haley and Tatum Beck that sometimes stare in his videos.

He spent his school years at Ironwood High School. Noah is a great athlete and played for the SC del Sol club soccer team in Phoenix. After that, Noah was a team captain in the U.S. Youth Soccer Olympic Development Program from 2014 to 2017. During his last two years of high school, Noah moved to Utah and played for the Real Salt Lake Academy.

Thanks to his outstanding athletic capabilities, Noah earned a full-ride scholarship at the University of Portland starting in 2019. He played as a midfielder on the Portland Pilots men’s soccer team. Due to the global pandemic, Noah was forced to finish the rest of his studies online. He completed his second semester of freshman year online but dropped out.

In September 2020, Noah got together with Dixie D’Amelio, sister of number 1 TikToker in the world, Charli D’Amelio. In December 2020, during the Covid-19 pandemic, the couple decided they needed to disconnect from the rest of the world. They travelled to Nassau, Bahamas and got overly criticized for not respecting pandemic precautions. Noah elaborated that they were careful, travelled by private jet, and stayed in a mostly empty hotel.

The career of Noah Beck

Noah Beck is slightly new to the social media scene. In 2020, Noah started posting on the platform during the Covid-19 pandemic. He quickly rose to popularity and gained millions of views within months. His content includes dances and skits to audio clips of songs, movies, and TV shows.

After being approached by Blake Gray, Noah decided to collaborate with other TikTok personalities. In June 2020, Noah joined the now-defunct collaborative group “The Sway House”.

In November 2020, Noah Beck was criticized by fans for charging fees for duets, although he later clarified that the payments were for brand deals. TikTok listed Beck as one of the top 10 breakout content creators of 2020.

In 2021, Noah Beck decided to dip his toes into acting and started taking acting classes. He got his own show on AwesomenessTV short-form series titled Noah Beck Tries Things. On 22nd January 2021, this six-episode series premiered with his girlfriend and several friends. In March 2021, Noah Beck was on a digital cover of VMan.

His wardrobe, including cuffed jeans, fishnet tights, and stiletto heels, led to comparisons with David Bowie, Prince, Troye Sivan, and Harry Styles. In 2021, Noah Beck appeared as a VIP guest for the Louis Vuitton menswear show.

Noah Beck is new to the whole social media scene and has been part of it for slightly more than one year. Still, he was able to pull out ahead into top TikTokers and collaborate with some of the biggest social media influencers.

On 14th July 2020, Noah Beck created his TikTok account. As of December 2021, Noah accumulated over 31.8 million followers and more than 2.2 billion likes. Noah posts a lot of the latest trend videos and dances. He has many teenage girl fans who adore him for his cuteness and athletic body. Noah sits on the 33rd spot at top-rated TikTok rankings, 800,000 followers behind “Faisal shaikh”.

How much does Noah Beck earn? Net worth!

Noah Beck has an estimated rough net worth of $1.2 million. He is a social media personality who started as a fitness influencer but turned more towards the latest trends and dances.

Noah earns money from ad revenues on YouTube and other social media. He is also expected to make as high as $60,000 per sponsored TikTok or Instagram post.