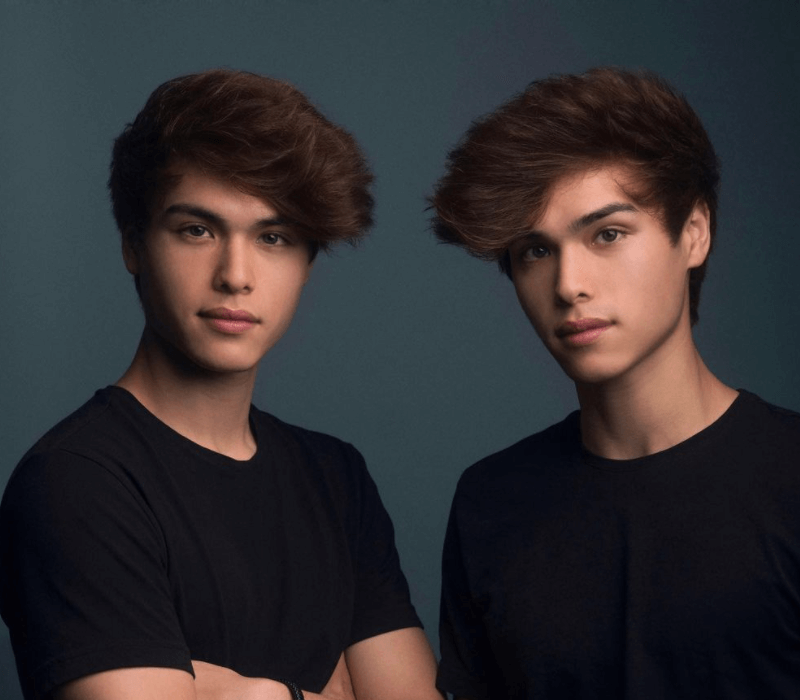 Who are the Stokes Twins

Alex and Alan Stokes are together known as the Chinese-American comedian duo Stokes Twins. They are known for their funny and viral videos and even appeared in several TV shows. Stokes twins are a part of the YouTube group Sunset Park.

Alex and Alan Stokes were born on 23rd November 1996 in China. They moved to Tennessee at a very young age and currently live in Los Angeles, California. Stokes brothers are identical twins, and Alan is 2 minutes younger than his brother Alex. Stokes twins are of Caucasian and Chinese descent.

They are nearly identical and even have the same hairstyle. Except that Alex has a mole on the right side of his face since birth, which helps fans tell them apart.

In 2019, Alex’s appendix burst and almost killed him. He didn’t feel well for several days and rushed into the emergency room at the last second. Alex needed to undergo major surgery to remove his burst appendix. If he had waited any longer, he would have developed an infection that could cause significant health problems or even killed him.

There is not much known about their family. On 18th September 2021, the Stokes twins posted an emotional video about losing their closed one. The video is titled “Losing a Parent” and starts with one of the twins talking about how they were raised in China by their Grandfather. They go on about how they regret not spending more time with him and how they feel guilty about missing his calls in the last couple of days.

Stokes twins keep their love life private as well. On the other hand, Alex has been linked to Leslie Contreras, a popular social media personality and model. They posted many videos together and were rumoured to be dating for a while.

The career of Stokes Twins

Stokes Twins are real OGs when it comes to social media. They created their YouTube channel while they were only 11 years old. Since the start of their career, Stokes twins posted the majority of their videos together, and their most popular channels are co-owned.

In 2017, the Stokes brothers became a part of the YouTube collaborative group Sunset Park where they met Andrew Davila. This group uploads interesting challenges, though not every group member will appear in every single video. Sunset Park includes Coby Persin, Ethan Bradberry and Okaymoe. They stayed in the group for almost a year before taking a break from YouTube.

Stokes twins also appeared in a multitude of TV shows and collaborated with celebrities. They landed themselves roles in shows such as “Brobot” with skateboarder Ben Azelart, “Afterschooled”, and the second season of “Light as a feather” playing two brand new characters.

In addition, the Stokes twins have released a compilation album featuring some of their favourite songs. The album has been popular among their fans, who get an insight into what type of music the Stokes twins listen to.

In November 2014, Alan Stokes joined Twitter for the first time. Three years later, in June 2017, Alex also created a Twitter account. They were both pretty active on Twitter but stopped posting anything in 2019. On 14th December 2021, the Stokes twins returned to advertise their Patreon account.

On 11th April 2008, in the early stages of YouTube, Stokes twins created their first YouTube channel. They amassed over 11 million followers and gained more than 1.6 billion views. The oldest video you can find on this channel is “INSTAGRAM Q & A! | Stokes Twins”, with over 650,000 views. Stokes brothers often post challenges, vlogs, Q&As and hilarious pranks that sometimes go too far.

On 7th September 2015, the Stokes brother created their second channel, “Stokes Twins Too”. This channel is mainly used for short hilarious videos, the latest trends and TikTok reposts. They amassed over 2.2 million subscribers and over 2 billion views.

On 6th April 2019, Stokes Twins joined TikTok. As of 2021, they gained over 31.4 million followers and nearly 850 million likes. They are currently on the 34th spot in TikTok rankings, less than 100,000 followers behind Noah Beck. Noah has triple the number of Stokes Twins videos and double views for comparison between these two channels. He even joined nearly one year later than the Stokes twins. They are your regular dancing TikTokers trying to post the latest trends in the most creative way and invent new trends.

Unlike their other social media, where they use the same account, they have separate Instagram accounts. Alex Stokes has over 4.8 million followers on his Instagram. Alan Stokes seems to be more prevalent on Instagram with over 6.4 million followers, more than 1.5 million more than his brother. They often post photos from everyday life and hilarious reels.

The controversy of Stokes Twins

Stokes twins are known for their pranks, but they took it too far this time. In October 2019, the Stokes brothers shot a bank robbery prank. They dressed up as bank robbers wearing all black with ski masks and carrying duffle bags.

First, they tried to make a getaway by asking unsuspecting people. When that didn’t work, they called an Uber. The driver refused to take them, and numerous bystanders called the police. This Uber driver was held at gunpoint before officers confirmed he was not involved in any robbery. Footage with police officers was even added to the video. The brothers were warned but not arrested and continued to film the video with a second prank four hours later at the University of California, Irvine.

In August 2020, the Stokes Twins were charged with false imprisonment affected by violence, menace, fraud or deceit and falsely reporting an emergency in connection or swatting with a YouTube video.

On the other hand, it’s not your regular “YouTube prank went too far” situation. The responding officers from the first prank reportedly gave suggestions for the video being filmed. One of the brothers even called the Irvine Police Department’s non-emergency line twice to inform them prior about the prank. Their lawyers even raised concerns about not pressing any charges for nearly a year. Authorities notified brothers only after the department issued a press release about them.

On 1st April 2021, the twins pleaded guilty in a plea bargain. They were sentenced to 160 hours of community service and a year’s probation.

How much do Stokes Twins make? Net worth!

Stokes twins have an estimated net worth of $4 million. Most of their earnings come from social media fame. They generate money through ad revenues and different sponsorships.

Stokes twins are expected to make as high as $120,000 per month from YouTube. The Stokes brothers also get money from sponsored TikTok and Instagram posts.