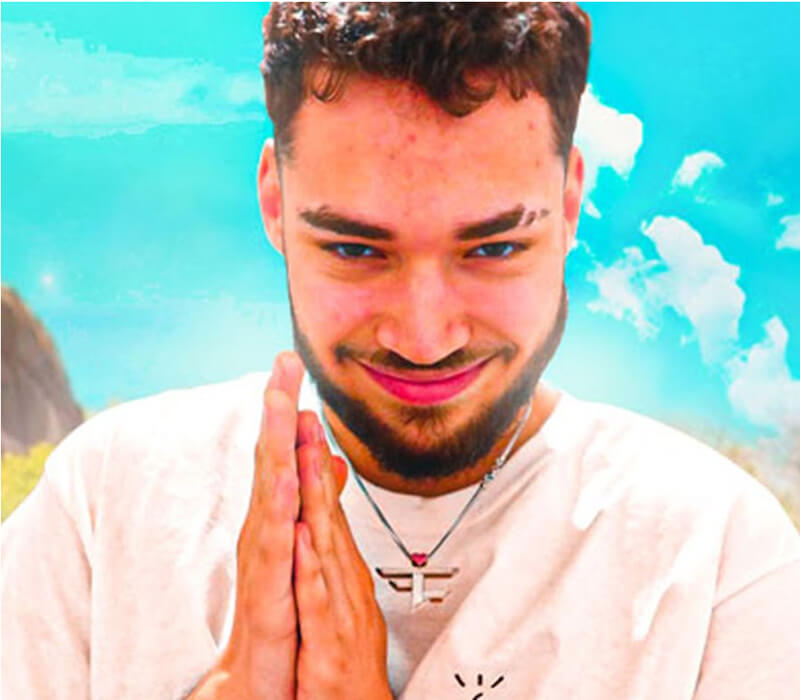 Who is Adin Ross?

Adin Ross is an American Twitch streamer, YouTube content creator and social media influencer. In his early days, Adin was known under the name Adin2Huncho. Adin is known for streaming NBA2K and Grand Theft Auto V, as well as streaming his everyday adventures on IRL "Just chatting" streams.

Adin Ross was born on October 11th, 2000, in Boca Raton, Florida. He completed High School in Boca Raton but skipped his High School prom to stream on Twitch. Adin lived in New York for a bit and then moved to California, Los Angeles, where he is currently living.

He is an American by nationality and comes from a strongly religious family. There is not much known about his family, but his sister Naomi appeared in his live streams a couple of times.

Adin revealed in a No Jumper interview that when he was 12 years old, he got stabbed by a mentally unstable relative. He was transported into a hospital and had nine stitches in his arm. Adin's relative got taken into jail before a judge ordered them to transport him into a mental hospital.

The career of Adin Ross

Adin created his YouTube channel in 2014 but posted his first video in 2019. In parallel with his YouTube career also started his Twitch career. Adin started streaming in 2019 when he was living with his sister Naomi. He started streaming daily his NBA 2K gameplay and joined a group called Always Excelling. This is where he met LeBron "Bronny" James Jr. and started playing matches with him.

Adin made his matches fun to watch because he did different kinds of wagers against other Twitch streamers and YouTubers. A crucial moment in his Twitch career was when he was streaming with Bronny, and Bronny's father, LeBron James himself, stopped by to say hello to his stream.

Adin started looking for different kinds of content. He started his own "e-date" show, where people tried to find dates over Discord as fast as possible. This led to a significant popularity boost and pushed him higher in the most-watched Twitch streamers charts.

On May 10th, 2021, Ross stated that he will donate 10% of his Twitch monthly income to a charity organisation of his Twitch fanbase choice.

Adin created his YouTube channel in 2014 but posted his first video in November 2019. He didn't gain too much popularity until he got to streaming with other Twitch celebrities and famous people. At the end of 2020, he had only 500k subscribers on his main YouTube channel.

As of November 2021, his fanbase more than doubled on his main channel with 1.3m subscribers and more than 750k subscribers between his two other channels. Adin started his career with different gameplays of NBA and GTA but is now shifting towards vlogs, comedy sketches and general lifestyle topics. He is also known for making gay jokes and acting like one before saying, "wait, I'm not like that", this behaviour is well-ish accepted in the gaming community because everyone knows he doesn't mean it, and it's just a joke.

With Adin slowly shifting towards IRL content and streaming with famous personalities, it is inevitable that someone is gonna find it offensive and call him out on his jokes. Although it looks like lately, Adin backed off on his jokes.

Adin revealed his own GTA V server called SSB Wrld. Famous names like Nav, xQc and Travis Scott amongst many many played on this server.

Adin Ross and the beef with Foolio

It's not clear if Adin didn't know what he was doing or how unwanted this beef was, but in April 2021, he got into a Twitter back and forth with a rapper Foolio. Adin was singing along with the "Who I Smoke" song, created by four rappers to diss Foolio, his friends and his brothers. There are some severe murder charges in this song to be considered, but we are not gonna talk about that. People clipped Adin on his stream, posted it and tagged Foolio. This led to Adin apologising, trying to end the beef, and that was supposed to be the end of this whole controversy.

Adin wasn't aware that he was streaming on IG Live and was singing the same song once again. He apologised again and even brought Foolio as a guest to his Twitch stream. This officially ended the whole beef between Adin Ross and Foolio.

Adin Ross and the beef with Ludwig and Sodapoppin

This all started on a roast session with Chance "sodapoppin" Morris and Ludwig "Ludwig" Ahren when sodapoppin stated, "I know who Adin Ross is, but where the f**k did he come from?". It all got even worse when another big streamer Nmplol called Adin's fans "The kids in high school who want to be cool.".

Unsurprisingly Adin was furious. "Don't disrespect my viewers like that. You guys literally have f*****g hall of fame nerds… in your chat that spam Poggers and Omegalul the entire stream." he lashed out before calling them "fat, pimple-faced four-eyed people with social problems.".

Ludwig himself reached out to Adin, "I don't want any bad blood between us. Not defend what I said. If it made you feel disrespected, that's on me." and brushed the whole drama off the table.

This whole situation was probably unnecessary given the fact it was performed on a roast session. On the other hand, Adin's temper is common knowledge to a point where anyone could guess right how he is gonna react.

On April 4th, 2021, Adin found himself amongst people who got botted followers to his channel. The total number was close to 3m bots following him, which spiked his fanbase. It's highly likely that whoever did that wanted Adin banned. He was lucky enough to escape the ban.

On April 10th, six days after the bots incident, Ross got banned because of a fellow YouTuber Zias. His friend answered a phone call and called Ross "faggot”. Adin wasn't in the room at that time, but he still got banned. Twitch staff admitted that it wasn't his fault and he can continue streaming, but his punishment hasn't been lifted yet. His fans started posting #FreeAdin on Twitter, and Adin's ban was cancelled on April 12th.

On May 29th, Ross received a 24-hour ban when he played GTA V. Adin got banned because he was roleplaying sex in GTA V. This didn't really get any attention, and it was deserved. After Twitch lifted the ban, Adin continued with his streaming schedule as nothing happened.

On July 7th, 2021, Adin streamed while driving his car. This is not against the rules of Twitch. So why did Adin get banned when streaming from your car is not against the rules? It's because he was reading his chat while he was driving. Adin stated that he is not sure if the ban is permanent or temporary. Twitch lifted the ban two days after this incident.

Adin's earnings on YouTube are not that impressive when compared with his Twitch numbers. Although he is still pulling some impressive numbers. On all of his three channels, Adin accumulated over 30 million views. With simple math, you will get that Adin earns $20-40k per month, resulting in somewhere around $350,000 per year.

Adin's numbers are growing fast. He is slowly climbing his way up the most-watched content creators ladder. He is expected to pull some astronomical numbers in the near future.

How much money is Adin earning on Twitch?

Adin Ross is one of the most successful Twitch streamers. He is one of the top 30 Twitch streamers sitting somewhere around 23rd place followers-wise with almost 5m followers. On the other note, he is 4th subscriber-wise, with more than 50,000 people subscribed to his channel. With so much drama around Adin, his subscriber count looks like a rollercoaster. Against all odds, Adin's total Twitch earnings are estimated to be over an impressive $1,000,000. This number includes subscription fees, additional donations and ad revenues. Again, this number is expected to grow in astronomical heights in the near future. For the last months, Adin climbed 10 spots in the most-watched Twitch streamers chart.

How much money is Adin earning through sponsorships?

Adin Ross, like most fellow Twitch streamers, keeps his personal life private. The same goes with his earnings from different sponsorship, and there is little to nothing known about these earnings. Why am I even mentioning this if we have no information?

Adin revealed in one of the live streams that he earns $2,000,000 per month from one of his gambling sponsors.

Adin Ross lives in Los Angeles, California. It's not like Adin is wasting money or anything, but he likes to have nice stuff and live a comfortable life. He is not shy to post about his newly bought luxury Lamborghini and even introduce it on an Instagram live stream.

He is currently living in a $30,000,000 house that he bought with FaZe Banks, Mike Majlak and Sommer Ray, among others.

How much does Adin Ross earn in total? Net Worth?

Adin's net worth is expected to be somewhere around $3,000,000. The majority of his earnings are between Twitch and different sponsorship deals with a shy amount of $30,000,000 per month from YouTube. His Twitch earnings are over $200,000,000, and Adin recently revealed that he is getting $2 million per month from a gambling company sponsoring him. There is not much known about his other sponsorship contracts, but I can't imagine it can get better than that.

With a streamer like Adin rapidly gaining huge chunks of fans and skyrocketing in popularity, it's hard to get the exact numbers on how much he is making per month. Still, a very rough guess is that he could earn anywhere between $4-6 million per month. The year 2021 is expected to be Adin's best year in terms of earnings because he gained a lot of fame very recently.