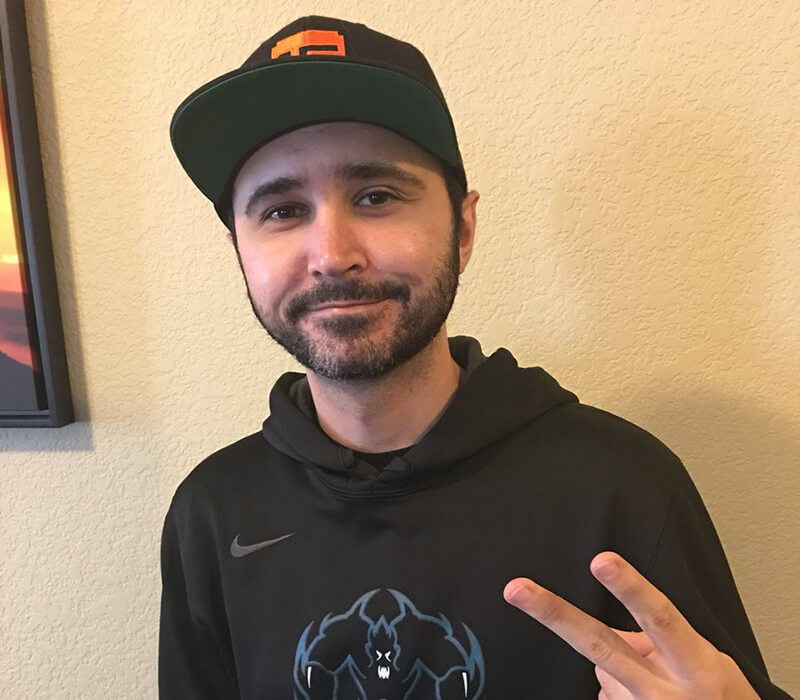 Summit's real name is Jared Russel Lazar. He is an American streamer born in Colorado Springs, Colorado. Summit used to be a big star in the competitive CS:GO scene, esports teams A51 and team Mythic. After that, he retired and started streaming on Twitch. Jared began his streaming career on 1st December 2011 and has been very successful since then. In 2013 he started streaming regularly and became a well-known streamer on Twitch by streaming CS:GO and WarZ, after that Fortnite, now he streams mostly FPS games like Escape from Tarkov, Grand Theft Auto V, Valorant, and is the most-watched DayZ channel on Twitch.

Before he became a full-time streamer, Summit was working as a call representative for Time Warner Cable. Jared was married to Twitch streamer Desirae Lazar. They divorced in 2016, but Desirae continued to work as his manager. There is still a lot of mystery around their separation, but both refused to give any closer information about their divorce. In 2019 Jared started dating another streamer Lilchiipmunk.

How much is does Summit1G make a year? Net worth!

He primarily earns from his Twitch subscribers, YouTube channel, merchandise, sponsorship and gaming deals. According to Twitch tracker, he gets a total of 434 million views on Twitch. Currently, he has 5.84 million followers on Twitch and 693,000 subscribers on YouTube.

How many fans does Summit1G have?

2017 was a significant year for Summit. This was the year where he got a lot of attention and momentum for his Twitch career. He surpassed Tom "Syndicate" Caseel in the number of followers on Twitch. In 2018 Jared beat Riot games in the number of followers and became the most followed channel on Twitch. So we had enough people watching Summit, but 2020 was where he finally got the BIG contract. Twitch offered him a multi-year contract regarding content and partnership support. As of 30th May 2021, he has close to 6 million followers on Twitch and is ranked as the sixth-most-watched streamer on the platform.

Like other fellow famous streamers, Summit1g is also surrounded by controversy and drama. Anything from psychic burnout and meltdown to girlfriend drama and controversial opinions on stream or Twitter.

In May 2018, Summit streamed with the king of controversy, YouTuber Jake Paul. After the stream, he received many complaints and was criticized by his fans for streaming with Jake. Many people even threatened to unfollow Summit's channel. In response to this massive backlash that happened, Jared stated: "I'm a little disappointed in chat. I had hoped the 1G squad would be a little bit different. I thought some people had a little bit thicker skin."

In December 2019, Sweet_Anita said the N-word on her stream and the clip has gone viral, but she didn't get punished. Summit's girlfriend lilchiipmunk stated on her Twitter that Twitch is promoting racism, so why Summit and his girlfriend got in trouble for that? The thing with Sweet_Anita is that she is suffering from Tourette's syndrome, which they didn't know. Jared publicly apologized to Sweet_Anita and said: "I hope you're doing okay through all the bullshit. You're killing it on Twitch, keep it up and keep trucking through."

April 2020 was when the new Riot shooter game was released into closed beta. Valorant in a free-to-play shooter game. To promote the game, Riot games invented a system where you were able to get a key to Valorant closed beta through "Drops" on Twitch stream. The only problem with that was that streamers started streaming recordings of them playing Valorant. Most viewers didn't care what stream they were watching, they just had the stream running on their background and waited for the key to drop. Chances were that if your stream is already first in most-viewed channels streaming Valorant, you will get even more viewers, leaving the less watched streamers with a tiny audience. Summit criticized Riot games for poor management during the closed beta and other streamers for abusing the Drops system to get more viewers. That started a "tweet war" between Summit with some people sharing his opinion and Riot games with channels that were abusing the Drop system. It was a short war. Jared later tweeted an apology and called for a truce. That tweet was deleted later.

Throughout the early days of CS:GO, Jared made a power move. In 2015 he committed to playing Counter-Strike professionally while still carrying his viewers along the way. His audience was able to hear their strategy and call-outs directly. The most mentionable moment of this semi-pro competitive career is when his stream peaked at ninety thousand viewers. On this day, he streamed his POV as a member of Team Mythic in the RCS qualifier in 2017.

On DreamHack 2016, Summit1G made a play that went down in CS:GO pro scene history. He clutched around for his team, leaving him the only player alive. Summit just needed to defuse and get the W for Team Splyce, but his premature celebration made him walk into his own molotov cocktail, leaving them still 1 point from victory. Since then, every time someone prematurely celebrates and loses, you can see "1G" popping all over Twitch chat.

You might wonder what the "1G" tag stands for in Summit1G. It's something from his past that he proudly carries with him throughout his career. 1G is a Counter-Strike community forum which he was part of. He found moderate success by streaming WarZ on its release, but most of his original audience comes from CS:GO streams. Summit is well-known for making a name for himself as the top influencers on Twitch and was an inspiration for many other channels. One of them worth mentioning is Shroud, the king of FPS games. Shroud himself credited Summit as one of the reasons why he started streaming.

During the era of Battle Royale games, Summit catered away from competitive gameplay and started streaming these games. He is well known for streaming games like H1Z1, PUBG, Fortnite, Apex Legends, Sea of Thieves, GTA V RP and the most popular MMORPG, which might look a little bit weird for you, but Summit is no one-trick pony, he played World of Warcraft on his streams many times.