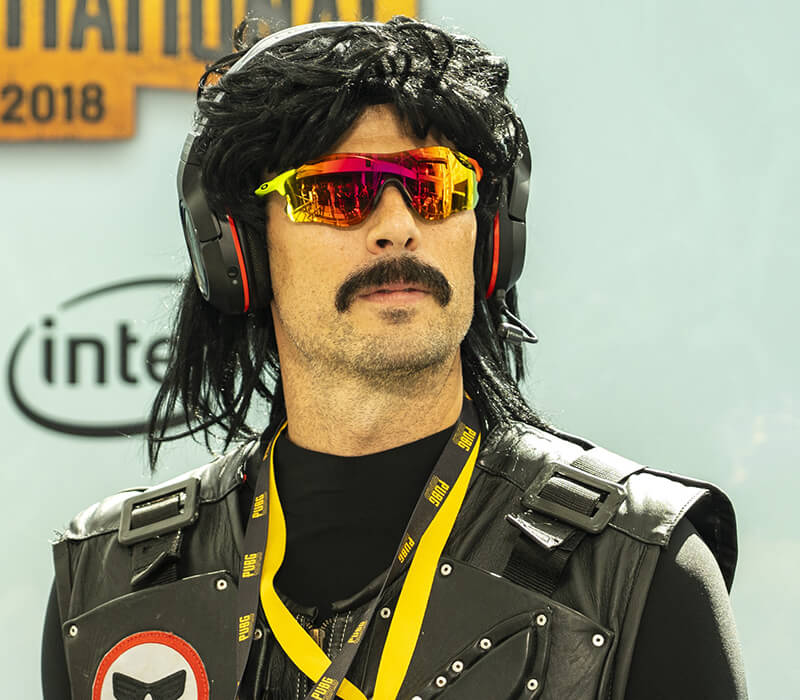 Who is Dr DisRespect?

Dr Disrespect's real name is Herschel "Guy" Beahm IV. He was streaming on Twitch but now runs his channel on YouTube. Herschel had more than four million subscribers on Twitch before getting permanently banned and moved to stream on a different platform. As he is often called by fellow streamers and his fans, Doc is famous for playing battle royale games like H1Z1, PlayerUnknown's Battlegrounds, Black Ops 4: Blackout, Call of Duty: Warzone, Apex Legends and Fortnite.

There is a lot of mystery surrounding Doc's ban on Twitch, and neither of them gave us a full explanation of what happened. He received his Twitch ban on June 26,2020, and got back to streaming on August 7, 2020. His audience on YouTube is peaking at more than half a million viewers.

Doc is a professional shooter games player and played competitively against other good players in tournaments, including Twitch rivals, amongst many.

Herschel has a degree from California State Polytechnic University, Pomona. He graduated in 2005 and is currently 39 years old. Doc played NCAA Division II basketball during his college years.

Doc posted his first video on January 11, 2010. It was just his gameplay video of Call of Duty: Modern Warfare 2. He also starred in multiple videos from gaming channel Machinima, where he played Call of Duty. Doc stopped posting videos later in 2011 and remained silent for almost five years.

Doc's signature genre is easily battle royale. He was there when the whole genre rose up. Starting from H1Z1, before moving to PUBG and later to Call of Duty: Black Ops 4. Herschel took a two-month break from streaming in December 2017 after admitting he was unfaithful to his wife to fix their relationship. He currently has one daughter. After his vacation was over, Herschel returned to streaming with full force. Doc's audience peaked at 388,000 viewers, almost beating Tyler's1 record of 410,000 viewers. Being that popular, he got himself multiple sponsorships. Serious companies like Gillette, Roccat, Game fuel and Asus reached out to him to sponsor him.

How much money does Dr DisRespect make in a day? Net worth!

Dr Disrespect makes approximate $2000 every day from his streams, advertisement, sponsorships and other sources of income.

After his ban from Twitch, Dr Disrespect switched to YouTube Gaming. He got back to streaming on August 7. His new era of streaming attracted more than half a million followers. Dr Disrespect makes approximate $2000 every day from his streams. Doc has over 3.2 million subscribers on YouTube. Most of his streams peak at 500,000 views, with a handful going over 1,5m.

Before Dr Disrespect got banned on Twitch, he had over 30,000 paid subscribers. Dr DisRespect earned approximately $30,000 – $35,000 per month from paid subscribers alone. That means around $300,000 a year just from subscribers, all of that without taking donations into account.

On September 11, 2018, an unknown person shot Doc's house with a BB gun. Supposedly this was the second time that happened. Doc played Call of Duty: BlackOut'. While playing it, there were drive-by shots shot at his house. Herschel was forced to break Doc character to explain to his fans what had just happened and then immediately ended the stream. Herschel later said that no one was hurt and the situation is being handled.

On January 10, 2019, Creative Artists Agency signed Beahm as a client.

In March 2020, Doc got the BIG multi-year contract from Twitch.

What you see on Twitch might not necessarily be Herschel Beahm, it's Dr DisRespect. He created a streaming persona that is different from his own personality. Doc is quick-witted, bombastic and ruthless. He is known as an entertainer more than a professional gamer. ESPN once described him as a "WWE character of competitive gaming". He once proclaimed, "I created a character who plays multiplayer video games, and he's considered the most dominating gaming specimen."

When Herschel is Dr Disrespect, he wears a black mullet wig, red or black long-sleeved athletic moisture-wicking shirt, sunglasses and a red or black tactical vest. Doc grows a moustache he calls "Slick Daddy" and nicknamed "The Poisonous Ethiopian Caterpillar". His logo shows sunglasses and a moustache. Herschel likes to appear as a role model from the 1980s. His stream is often accompanied by music from the 80s or related to funk. All of his stream video effects are from the 1980s.

On June 11,2019, Doc started his IRL streaming adventures. This was a really short adventure because his channel got banned while he was Live streaming from a public restroom. He live-streamed from this restroom two times before he finally got banned. This happened at the 2019 Electronic Entertainment Expo in Los Angeles, California. He got suspended for violating Twitch's privacy rules and privacy laws in California Penal Code. As a bonus, E3 organizers cancelled his pass and banned him from the event. Twitch lifted his suspension on June 25, the same year.

On Doc's stream, he is regularly caricaturing Chinese accents and language. This backlashed into musician Jimmy Wong compiling a series of clips and accusing Doc of racism. Nothing really happens after that. Doc shook it off and claimed that some of his best friends are Asian and called the accusation "laughable".

While streaming, Doc shared two tapes of widely debunked coronavirus-related media. Kotaku stated: "But it's not surprising that he chose to do it. Time and time again, he's acted with reckless irresponsibility while streaming." Giving another example, they state: "He constantly walks a line between comedy and outright toxicity, never very carefully."

On June 26, 2020, Doc's Twitch channel got permanently banned. An official statement said, "We have evidence that a streamer has acted in violation of our Community Guidelines or Terms of Service. These rules apply to all streamers regardless of status or prominence in the community". Twenty days after his ban, on July 16, Doc provided an interview for PC Gamer and The Washington Post, insisting that he still doesn't know why he got banned from the platform. His contracts were still on good standings. He refused to hear any crazy speculations or conspiracy theories about his suspension. Instead, he focused on his upcoming Dr Disrespect 3.0 personality. Doc's Twitch ban remains a mystery to this day, and it looks like we'll never find out.

On August 6, 42 days without streaming, Herschel made an Instagram live stream and another music video featuring J+1. He tweeted out a link to his YouTube channel stating, "Tomorrow, we arrive." His YouTube channel went live simultaneously, only to show a looping video of a custom rainy Champions Club gas station. He also confirmed that he will show on his stream the next day at 12:00PM PT. On August 7, Doc got back to streaming, this time on YouTube. He went again with full force. Him streaming this gas station got him, 330,000 viewers. As Dr Disrespect on the next day, when the countdown ended, his stream peaked over 510,000 viewers.

Herschel rages a lot and "disrespects" people. Doc rages a lot when he loses a game of Fortnite/PUBG/H1Z1 or anytime he thinks he dies from a "noob". He does get 'Stream Sniped' a lot and rages from it, calling out the person as a "Punk Kid".

Doc is heavily influenced by the 1980s. His streams are accompanied by Synthwave and Retrowave music.