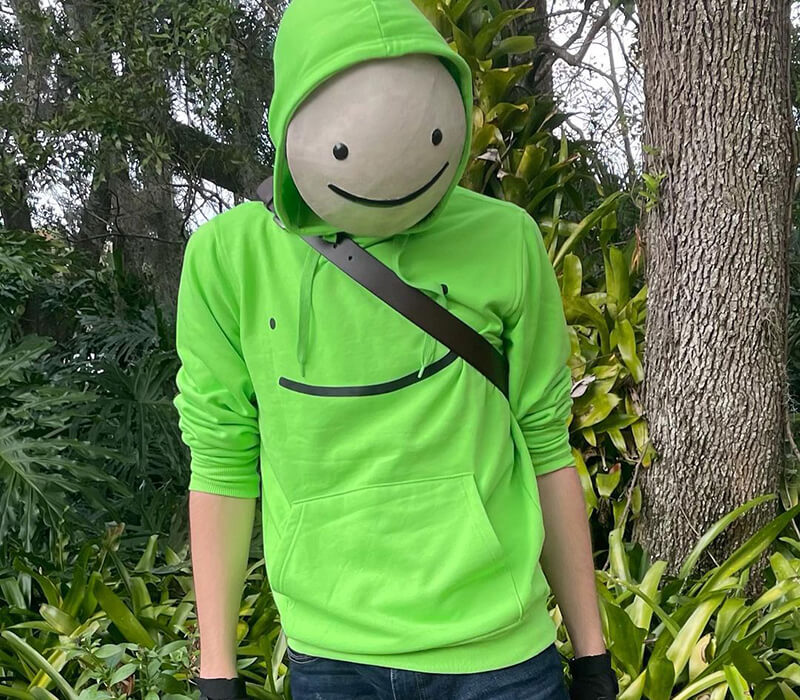 Clay was born on August 12, 1999, and is 21 years old. He is better known as DreamTraps or just Dream. Clay is an American vocalist and YouTuber famous for his Minecraft videos.

He owns one of the fastest-growing channels on YouTube. Dream hit the 10 million subscribers milestone in a little over a year and is a part of a group called "Dream Team" with GergeNotFound and Sapnap.

How much does is Dreamwastaken earning? Net worth!

Considering Dream is one of YouTube's fastest-growing stars at just 21 years old, his riches are all the more impressive. It's impossible to know, but estimates are between $3 million and $5 million.

Dream is a Minecraft YouTuber. His videos often consist of some kind of challenge. His most known series is "Minecraft Speedrunner VS Hunters" and "Unsolved Mysteries", where he tries to get on top of some Minecraft mysteries.

Dreamwastaken and his music career

Dream's first song was announced on his main Twitter on February 3 2021. Shortly after that, this tweet was deleted. Later he posted a snippet of this new song on his private Twitter called dreamhangout. On February 4, 2021, he released an official lyric video called Roadtrip.

Roadtrip was released to not forget the past, even though things have changed and about remembering the good memories.

Clay announced a new song, "Mask", on his private Twitter. He tweeted that it would be a solo clip, not featuring other artists.

This series introduces some of the most famous Minecraft mysteries and tries to solve them. It includes the following videos:

Minecraft Championship is run by the Nox crew. This event includes famous Minecraft streamers and YouTubers in teams of four. Participants compete in a series of 8 minigames decided by them. A point multiplier makes the following round worth more than the previous, forcing teams to vote for games that might be bad early in the tournament just to save their most skilful minigame for the finish. In the finals, two teams with the most points compete against each other in a round of "Dodgebolt" to decide the winner. It's not uncommon that the team with fewer points actually wins, thanks to the massive points gain from the final round.

Minecraft Ultimate is the largest Hunger Games event ever held in the Minecraft community. It includes 250+ streamers and YouTubers and is organized by Noah or Pikaclicks.

Dream was eliminated very early, killed by Joko's team due to lag, and a -15% damage nerf.

During Minecon 2020, a poll was created to decide what next mob will be added to Minecraft. The poll included three mobs the Moobloom, Glow Squid and Iceloger. Dream tweeted that he will follow anyone that will show him proof that they voted for Glow Squid. This tweet was deleted by Dream shortly after he posted it. Glow Squid ended up beating Iceloger by a small amount. This made many people really frustrated and angry about Dream influencing his fanbase into voting for Glow Squid. This backlash resulted in HelenAngel asking the Twitter community if they should make these polls where fans decide or cancel them in future.

Jawsh, a famous YouTuber, made a statement "stan culture" is unhealthy, monsters, garbage, and immoral, calling the people in the culture "unwell mentally". In this post, he said that he is tired of people being obsessed with him or other people, such as Dream. This Tweet received a lot of mixed reactions, with Dream responding, "You're an idiot". A lot of people called this response immature. This started a tweet war between Dream and Jawsh. It had even more backlash when Karl and Tubbo made joke tweets about them "farming their Twitter for likes."

Dream released a video on his second YouTube channel where he explained his opinion about the meaning of "stan". He basically said that the definition has changed. People accusing other people of being stans are often more toxic than the actual stans.

Dreamwastaken and his speedrun Cheating Scandal

On December 11, 2020, Minecraft head moderator Geosquare released a video about Dreams 1.16 speedrun. This video included statistics of how lucky Dream's run was. He didn't want to look like he had any bias against Dream, so Geosquare actually gave him the benefit of the doubt and shifted the odds in his favour. Those statistics were actually biased in Dream's favour. However, it still looked like you could get a run like this only once in 7.5 trillion runs, which is statistically impossible. Moderation concluded that his game needed to have some kind of modification to get a run like this. This incredible luck included crazy lucky ender pearl trades and blaze rod drops.

"In the act of transparency, I'm linking a download to my 1.16 19 minute world file below. This includes the modpacks folder and logs that list every mod that was loaded at the time, no custom mods.

On December 23, 2020, Dream released a video, which is not accessible anymore, with flawed statistical numbers. Redditors and researchers said that the person made amateur level mistakes and didn't understand the applied concepts. Dream claimed that the person behind the math of those statistics is a Harvard graduate and an astrophysicist. Since Dream didn't share his name, everyone was very sceptical about this proclamation.

On December 31, 2020, Karl Jobst released a video with statistical analysis with computer simulations, where he ran trillions of simulations in order to see if Dream's run was legit. At the end of the video, he concluded that his run is impossible to be replicated, and Dream was playing on a modified version of Minecraft.

On December 31, 2020, AntVenom released a video that included a binomial distribution calculator to find Dream's odds. He removed the last run and used Dream's older streams with more believable odds, and combined them together. The result was that there is a one to 6.9 trillion chance that Dream's luck would have happened.

On February 16, 2021, Dream removed his response videos because he didn't want new viewers to know. It wasn't the content that he usually posts.

This cheating controversy quickly became a running gag in the Minecraft community. Hundreds of memes were posted saying "he is just very lucky" when multiple impossible events happened quickly.

On May 30, 2021, Dream admitted he accidentally used client modifications that affected his ender pearl and blaze rod drop rates. He admitted he used these modifications during ~6 of his live streams on Twitch. Dream also said that this was the reason why he removed his response video. Soon, mods decided to remove every single of Dream's Minecraft speedruns, including three of his world records. Geosquare later tweeted out that he is glad to see some kind of closure on this case.

On June 2, 2021, Dream posted an apology to the Minecraft community and all people on the other side of the argument (including Geosquare). He also stated that he has no intentions of posting Minecraft speedruns.