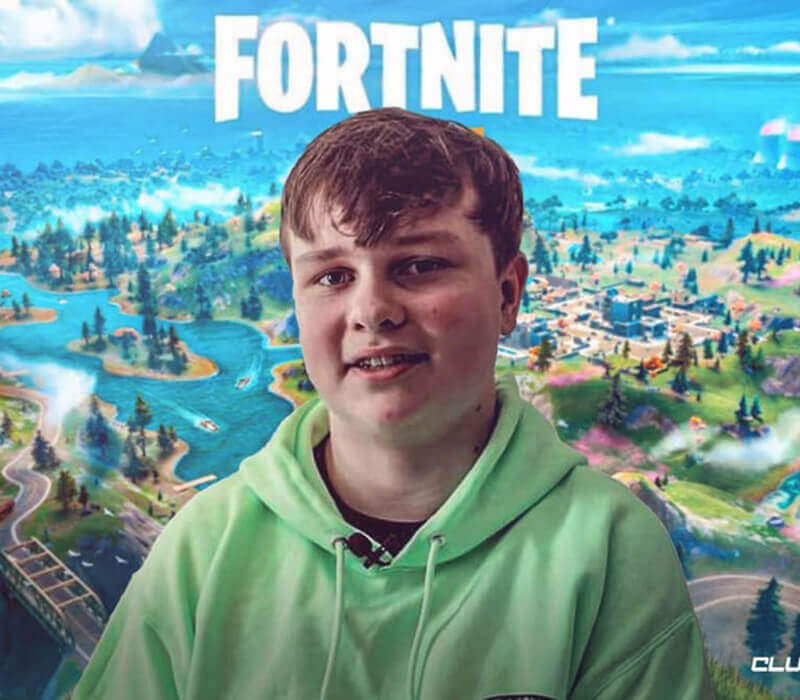 BenjyFishy was born on April 2nd, 2004, in the UK. His real name is Benjy David Fish. He is one of the youngest Fortnite pro-players, Twitch streamers and YouTube content creators. Benjy qualified four times in the European region and won around 15 million as of September 2021. He is known for playing with other young Fortnite players like MrSavage, Mitr0 or fellow lad from UK Mongraal.

He finished in 14th place as a duo with MrSavageM and in 25th place at the 2019 Fortnite World Cup.

Benjyfishy was living in a small riverside cottage. It was a town that other small towns call tiny. This surely wasn't created for a high-speed connection. Benjy actually never imagined he would compete on an eSport scene. His brother introduced him to gaming, and Benjy enjoyed Guitar Hero, but he was an athlete by nature.

Benjy played rugby, cricket and soccer in his early years. He won a lot of 10-pin bowling trophies, which are still exposed next to his streaming setup. Benjy started playing 10-pin bowling on his 3rd birthday. He and his mother travelled all over England and trained with different coaches.

His sports career ended when doctors diagnosed him with Osgood-Schlatter disease and Sever's disease. Which affected his knees and feet.

Benjy naturally catered towards computer games where his legs could stay still. After Benjy won his first tournament, his teachers couldn't believe someone just made money playing video games.

Benjyfishy was more than capable of competing in the Fortnite World cup, but he wasn't allowed because of age limitations. Luckily for him, Epic Games lowered the restrictions limit to 13, and he could compete.

Over the 10 weeks of qualifications, Benjy was able to qualify four different times. This was a tournament where many other streamers didn't make it out of the qualification rounds, including Tyler "Ninja" Blevins and Team Liquid's Thomas "72hrs" Mulligan.

Benjy has a really supportive mother who also works as his manager. He quit school so

he could focus on his gaming career, most parents wouldn't be happy about such a

decision, but his mother actually encouraged him to do it. Benjy's mother arranged a

homeschool program for him to have at least part-time education.

Benjy started his gaming career at a very young age. He competed in the first-ever Fortnite World cup against other top tier Fortnite pros. Benjy is currently the youngest Fortnite professional player. His official pro player path started in 2018 when he signed a contract with Clairvoyance eSports. Since then, Benjy moved between a couple of different teams, including Team Cryptik and Team Flush. Benjy finally settled down in 2019 when he signed a contract with NRG eSports as a Fortnite player.

Benjy was one of the few content creators who received the Fortnite Locker Bundle. This bundle allowed other Fortnite players to purchase his signature items in the video game.

In 2020, Benjy organised his own tournament called benjyfishy cup.

That same year in 2020, Benjy signed with the Loaded Management Firm.

"I am really excited to be joining Loaded, they have an incredible roster of players and influencers, and I am beyond happy to be able to be a part of it,"

Benjy created his YouTube channel a few weeks before his Twitch channel on July 12th, 2014. This was only a couple months after his 10th birthday.

Benjy started streaming on Twitch when he was only 10 years old. His stream had a very tiny audience and averaged 10 viewers. Things changed when Benjy won his first tournament and snatched a prize of $10,000. His channel popularity started slowly rising and now holds more than 3.5m followers. As of November 2021, his audience averages 16,000 people. Benjy's most-watched stream happened in June 2020, when his viewership peaked at 35,000 viewers. He is the opposite of a variety streamer. Out of 1770 hours streamed, 1730 was Fortnite.

Benjyfishy's peak performance was in Fortnite World Cup 2019 duos. He and his partner Martin "MrSavage" Foss placed 14th and won $50,000 each.

Benjyfish's YouTube content consists of Twitch stream highlights. These compilations are 20 to 30 minutes long. He uploads regularly and roughly makes around $6,500 to $7,500 per month and somewhere around $80,000 per year.

How much is Benjyfish's Twitch income?

With an average audience of 16,000, Benjy should be making almost $5,000 per month and more than $50,000 per year. These numbers assume everyone has the lowest tier subscription, which is not true. Benjyfish probably earns more money because of higher-tier subscriptions and donations, and his yearly income could spike anywhere from $60,000 to 80,000 per year.

Benjyfishy is a member of NRG eSports and gets a salary that is unknown. Benjy is also getting sponsored by different companies like Turtle Beach, Levi's, Roccat, Purple, Hot Pockets and Army National Guard.

How is Benjyfishy spending his money?

Playing in a different region than you are living in is surely annoying. Having worse latency than other players can be rough and can often lose you a game, especially in a professional play environment.

A player from England, Benjyfishy, was playing on NA servers with 60ms. His fans were convinced that Benjy bought a Fortnite server. He later stated that he, in fact, bought a dedicated business line network for himself, which would cost around $20,000.

Benjyfishy has stated that he would like to purchase a house in the future.

How much is Benjyfishy's net worth?

Benjyfish is making roughly $120,000 from different sponsorships, YouTube ad revenues and Twitch subscriptions. This number is fluctuating a lot because of Benjy's tournament prize money which can range anywhere from $5,000 to $1,000,000.