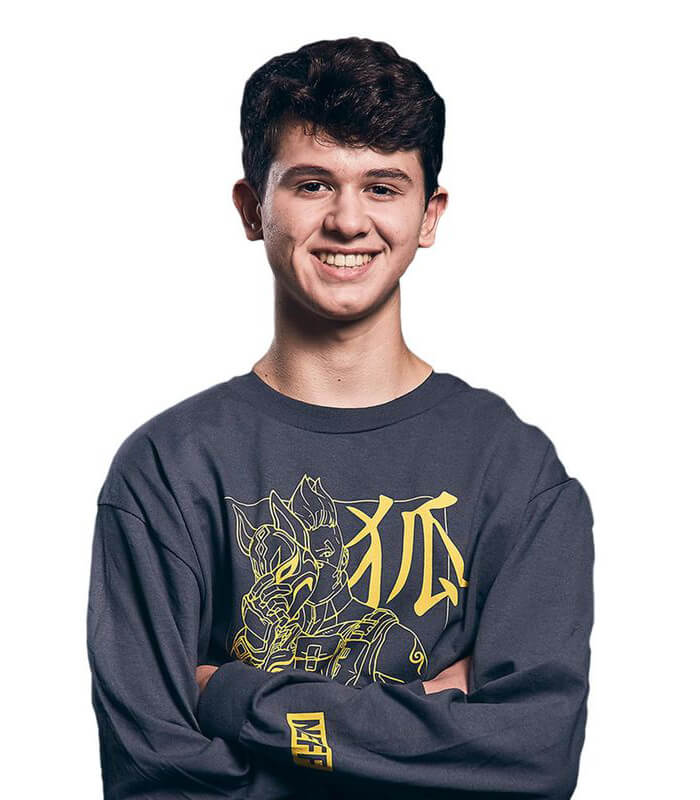 Kyle Giersdorf is an American Fortnite streamer and esports player. His fans and other competitors know him as Bugha. Kyle's fame took a rapid increase when he won the Fortnite World Cup in 2019. Bugha lives in a town in Pennsylvania. He got this nickname from his grandfather, who called him Bugha. Kyle was first introduced to the PvE version of Fortnite called "Save the World" by his father, who is also a gamer.

Bugha started his streaming career in March 2018. In this year, he streamed for 173 days with an average audience of 10 viewers.

Bugha played with team No Clout at first but later signed a contract with esports organization Sentinel. Kyle participated in the 1st Annual Fortnite World Cup that started on July 26, 2019. Bugha in Fortnite solo tournament on 28th. He played 6 matches against players who also qualified. Kyle came out as a winner with 59 points, almost doubling second-place Psalm with 33 points. He won three million dollars and more than doubled his fanbase. His youtube channel jumped from 44,000 subs to 159,000 subs. His Twitter account got verified and went from 31,000 followers to 156,000. His Twitch popularity increased from 76,000 to 120,000 followers. Jimmy Fallon asked Bugha for an interview two days later.

Epic Games created an in-game skin for Bugha as a part of Fortnite's icon series event. Other famous figures like soccer player Neymar and streamer Ninja got their Fortnite skins during this event.

"Swatting" is when a streamer gets "pranked" in a way where one of his viewers reports his address for holding people hostage or some other serious crime. Streamer then gets swatted by police, questioned and hand-cuffed. Kyle has been swatted multiple times while on stream, once even while attending a tournament.

After Kyle won his huge Fortnite tournament, he didn't have much time to celebrate. Both his Twitter account and Twitch channel got hacked by someone named Percocet. This hacker was using voice changer to sound like bugha and promoted his own Twitter account. He also hacked hundred gifted subs, which are worth around $600 each.

After he did all of this, he also tried to damage bugha's reputation and retweeted posts made by Joseph, which was Percocet's account. Luckily organization that bugha is part of, the Sentinels, helped him retrieve his account.

How much does Bugha make on Twitch?

Bugha has a pretty massive fanbase on his Twitch channel, with 4.4 million followers. His Twitch money comes from donations, advertisements and subscriptions.

Bugha, after Twitch takes his cut, makes 2.5 dollars from every subscription.

According to Twitch tracker, Kyle has 1,750 subs on his Twitch channel. Every sub gets him $2.50, which makes it $4,330 per month from Twitch subscribers.

Kyle gets money from playing advertisements on his channel. An estimate is 2 dollars per 1000 views.

From the Twitch Tracker data, you can see that Bugha has 1,513,048 total views on his Twitch channel over the last thirty days. His estimate is $3,030 per month from Twitch ads.

You can find a streamlabs tip jar on his stream, where he gets donations from his fans.

His estimated earnings from donations are somewhere between $1,000 and $4,000.

Kyle has almost 4 million subscribers on his YouTube channel, he uploads 4 times a week, and every video gets around 200,000 views.

On YouTube, money is made through ads displayed in videos. YouTube pays between $1–$5 for every 1000 views in the gaming category, depending on the age and location of your viewers.

How much money does bugha make from tournaments?

Bugha gets money from sponsors. They pay Bugha a monthly fee for showcasing their products on Twitch and YouTube.

Bugha gets a percentage of money earned from his merch. He shares these earnings with the Sentinel organization. You can find his merch on their website.

How active is Bugha on social media?

Kyle is also famous on social media, where he is very active. His Instagram account has over 4 million followers and more than 1.5 million followers on Twitter. Big gaming companies often ask him to showcase their products and games. This is, of course, not for free, and Bugha gets paid for these promotions.

How much does Bugha make a month? Net worth!

Kyle's earnings are estimated at $35,600 per month. This includes only his live streaming and videos from YouTube channel. Suppose we sum all of his average estimated earnings, including salary, merch sales, sponsorships and tournament earnings, with his Twitch and Youtube money. In that case, his monthly income is $60,000 per month.

Roughly his Net Worth is estimated at over $4,000,000. This number is steadily growing since he won his first massive Fortnite tournament.