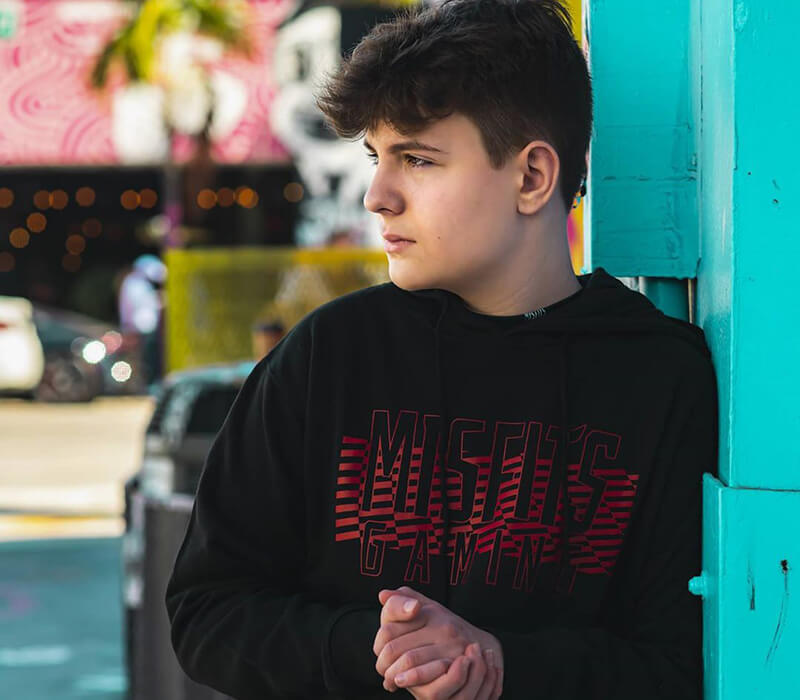 Clix's real name is Cody Conrod. He was born on January 7th, 2005. Cody is currently 16 years old, making him one of the youngest competitive Fortnite players. He finally got some attention after he qualified for Fortnite's first annual World Cup and was picked up by an esports organization called NRG on July 1,2020. Cody also posts videos on YouTube and live streams multiple times a week.

Clix is known for his high performance in Fortnite 1v1s. If you visit his stream, you can compete against him and often make a bet for something.

Clix started his content creator career on November 11th, 2017. That day he had his first live stream and created the Clix YouTube channel. Cody didn't upload anything for almost half a year. His first video got uploaded on April 21st, 2018. The footage showed a build battle he experienced against another player. Clix started posting Fortnite montages and didn't get into the competitive scene yet. His pro-Fortnite player career took off after he qualified for Fortnite's first annual World Cup and won almost $60,000. Even though his pro career wasn't entirely going, he was a part of team Misfits from March 30th, 2019. After he won Fortnite's first annual World Cup, Clix made himself a name, left Misfits on July 1st, 2020 and joined NRG on the same day.

Clix was temporarily banned on Twitch

Twitch doesn't allow you to play with other suspended streamers. Cody was playing on his stream with fellow streamer ZaynSZN, who was currently under suspension. The ban hammer hit quickly, and Cody got banned for seven days. Clix got his sentence reduced to three days and started streaming again.

Clix was permanently banned on Twitch

Clix was permanently banned on February 14th, 2021. The reason behind this ban is unknown to this day, but there were some rumours. Some sources claimed that Clix shared nude pictures of StableRonaldo, which happened on the same day as the ban. Another source says that it could be because Clix played copyrighted music while live streaming multiple times and even got some warnings from Twitch. His fans started a trend of #FreeClix on Twitter, and Cody's punishment was lifted the day after it happened.

During Fortnite Series Invitation: Grand Finals, Clix sniped UnknownxArmy and dance emote on him, which is considered BM (bad manners) in gaming society. It is one of the most disrespectful things you can do to a player after you beat them. This was also later into the tournament in game 5 out of 6, so things were pretty heated up. In game 6 out of 6, UnknownxArmy landed in Cody's preferred landing location and tried to grief him. He failed to eliminate Clix and died while chasing a different player. Some famous streamers like Ninja and Summit1G shook their heads about these arguments and posted their opinions on Twitter.

How much money does Clix make on Twitch?

Clix has more than 4,000,000 followers on his Twitch channel. After Twitch takes its cut, Clix gets $3.5 from every subscription. He should be getting roughly $2 for 1000 people viewing his Twitch ads.

If we look at Twitch Tracker, Clix has an averagely of 20 thousand subscribers per month. This makes it $67,000 monthly. Over the last month, his Twitch channel has 1,5m views which cause over $2,700 per month from Twitch advertisements.

Clix has almost 2 million subscribers on his YouTube channel. He uploads a couple of videos every week, and they reach around 1 million views each. Cody has an average of 7 million views every month. We can safely guess that his monthly earnings from YouTube are $20,000.

How much money does Clix make from other sources?

This includes Clix's tournaments income, product showcasing and team salary. According to multiple websites, Clix has made $280,000 from competing in 40 Fortnite tournaments.

Cody is getting sponsored by hot pockets, Purple, Turtle Beach and Levi's. He never shared how much they pay him.

Clix should be making somewhere between $80,000 to $100,000 from just his Twitch and YouTube channel. This does not include sponsorships, salary because of low information in these regions and Fortnite tournaments because of inconsistency. His monthly income should be easily over $100,000 even if we consider the lowest numbers of those regions.