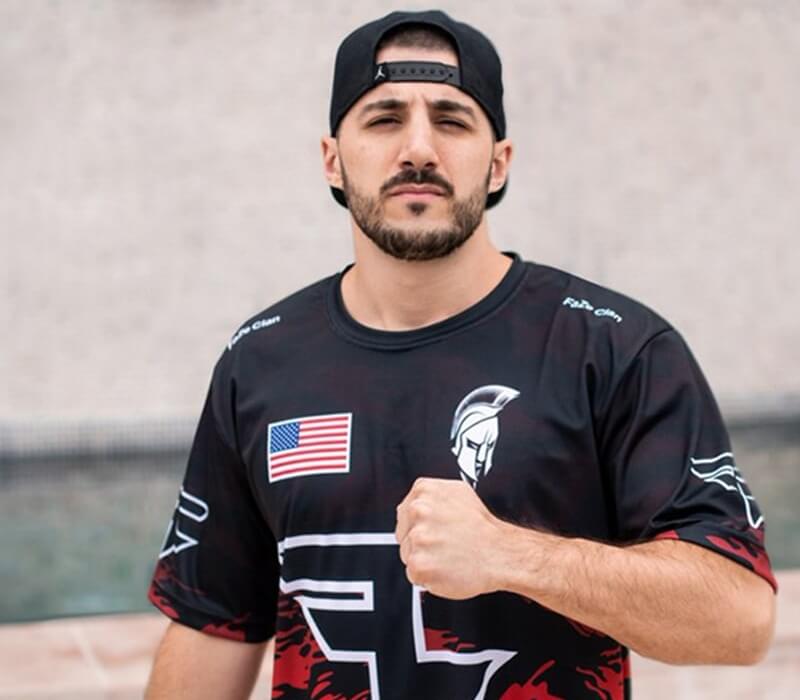 Nicholas Kolcheff, better known under the pseudonym NICKMERCS, is Twitch Streamer and YouTuber from the USA. He is CO-Owner of a professional esports and entertainment organization FaZe Clan, formerly FaZe Sniping.

NICKMERCS is known for playing Fortnite: Battle Royale and Call of Duty: Warzone. He held the Fortnite World Record for most squad kills in a game and most kills from a duo. Kolcheff is also known for not playing on the keyboard but on a controller. Nick also participated the Fortnite tournaments such as Friday Fortnite, a tournament by Keemstar.

Nicholas was born on November 21 1990, in Michigan, USA. He comes from a Christian family. His dad name is Kevin Kolcheff, who worked as a high school football coach, and he has his own Twitter account under the nickname PoppaMercs. Nick has two younger siblings. He attended City High School at Grand Rapids in Michigan and later went to the UMICH - University of Michigan.

Kolcheff loved playing since early childhood, he began playing console games such as Golden Eye on Nintendo. However, his parents strictly didn't approve his interest in gaming. It even escalated as far as they destroyed his Xbox one day.

NICKMERCS was in a relationship with Emumita Bonita for many years. Emumita Bonita is, in fact, only her username on Instagram, and her real name is unknown. On July 8, 2019, NICKMERCS made an announcement on Twitter about their engagement. The wedding took place at Brengman Brothers Winery in Traverse City, Michigan, on October 10, 2020.

Kolcheff and his wife are both pet lovers. They have a seal point Siamese cat named Kai and two golden retrievers named Joe and Jackson. All of their pets have their own Instagram accounts.

NICKMERCS journey surprisingly didn't begin with Twitch career. He played Gear of War professionally in the late 2000s, and he built his name on that. After that, Nick started playing the popular FPS game Halo. Kolcheff had some disagreements with famous streamer Ninja due to trash talking.

His streaming career started in 2010 on Justin.tv. He built his following base on his success in Gears of War. Next year, in 2011, Nick created his YouTube channel and started there by making Outlast and Call of Duty videos. He featured a different type of Call of Duty games on his channel, such as Ghosts, Modern Warfare Remastered, and WWII.

He created his Twitch channel on September 13 2010, and switched there from Justin.tv. Nick fanbase was slowly growing up as he is a very talented and entertaining personality. He usually played COD and occasionally UNO and Monopoly online as well.

NICKMERCS's boom came in July 2017 when the game Fortnite was released. Nick immediately started playing this battle royale game on his stream and quickly became very good at it. In 2018, Kolcheff joined 100 Thieves as a content creator. This gaming organization based in LA was founded by famous Matthew "Nadeshot" Haag.

The most significant moment of Nick's career was when his squad broke the world record for total kills in Fortnite with 55 kills. This record was later beaten with 59 kills, and then an Australian Fortnite team has set a new world record at 61 kills. Kolcheff won the first Fortnite Friday ever, a tournament organized by popular YouTuber KeemStar. He won alongside SypherPK, and they both earned $2,500.

In May 2019, Kolcheff left 100 Thieves as he wasn't satisfied with the management, and they didn't keep their promises. Later the same month, he joined FaZe Clan.

How many followers, subscribers, and viewers does NICKMERCS have on Twitch?

As of today, NICKMERCS's Twitch channel has more than 5,8 million followers, which makes him the 13th most followed Twitch streamer. He has more than 180 million views in total on his channel.

Whenever he goes live, around 40,000 viewers are watching him throughout the whole time! NICKMERCS is currently having more than 63k active Twitch subscriptions.

NICKMERCS also has YouTube Channel with more than 3,91 million subscribers.

How much does NICKMERCS make a year? Net worth!

As of 2021, NICKMERCS' net worth is estimated to be approximately $4 million. This comes mainly from his Twitch incomes such as subscribers and ad revenue, as well as from his YouTube channel, merchandise sales and sponsorship.

If we look at his Twitch, he currently has more than 60,000 paying subscribers on Twitch, which means he earns approximately $150,000 per month only from subs. So if the subscriber level stays about the same the whole year, he makes about $1,8 million per year from subscribers, and it doesn't include donations, ad revenue or sponsorship.