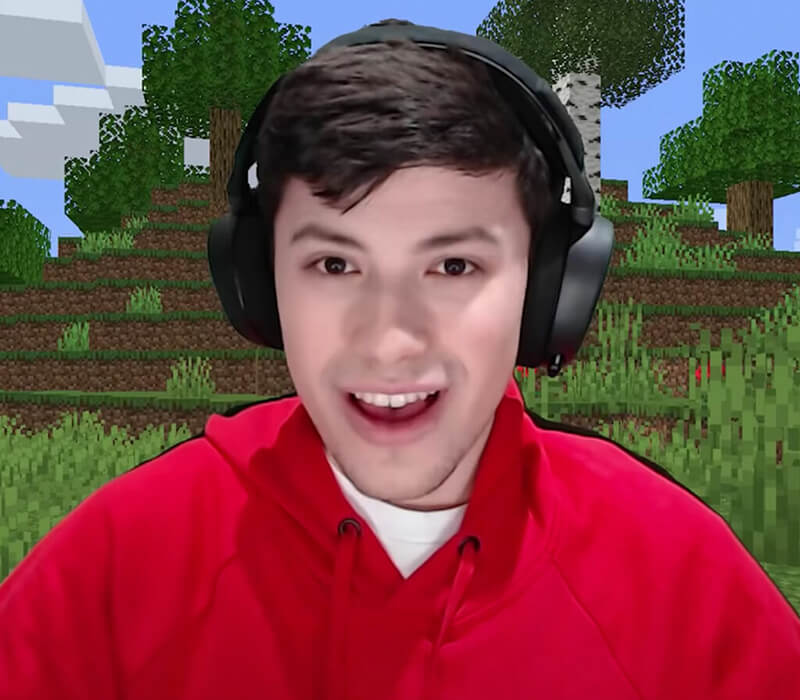 His real name is George Henry Davidson. George was born on November 1, 1996, and is 24 years old. GeorgeNotFound is a British YouTuber, Twitch streamer. George creates Minecraft videos and collaborates with famous personalities like Sapnap, Dream and BadBoyHalo and is a part of the Dream SMP server. George's YouTube videos often start with "Minecraft, but…". He plays Minecraft with various twists to it or different Minecraft mods like bed wars or hunger games.

GeorgeNotFound wasn't always as popular as he is now. George started his YouTube career in 2013 and accumulated only 500,000 subscribers on his GeorgeNotFound YouTube channel. This started changing in May 2020. George collaborated with different popular content creators and started posting various Minecraft challenge videos and speed runs.

George is a member of the "Dream Team" along with Dream and Sapnap. They created a Dream SMP Minecraft server to play together and later opened the server to their fans.

George is one of the fastest-growing YouTube channels and gained more than 12.5m subscribers on all three of his channels. GeorgeNotFound, GeorgeWasFound and Not GeorgeNotFound.

George doesn't play just Minecraft. You can find him playing other games like Apart, Among us or Phasmophobia on his Twitch channel.

George was growing up with his sister and got a degree in computer science. He was born in London but currently lives in Brighton. George is left-handed and a massive fan of Harry Potter. He once stated on his stream that he identifies himself as Ravenclaw. His favourite music artist is Travis Scott.

On April 15, 2020, George Tweeted that he suffers from severe protanopia (red-green colourblindness). Later in the year, George bought colourblind glasses and posted a video with him finally seeing true colours in Minecraft. This video was posted on September 9, 2020.

George and his pets

George loves pets and currently owns one cat and one dog. Before he got these two, he had a cat called Luca. She was a British shorthair cat. George adopted Luca in October 2019. Luca was often appearing on streams and got her own fanbase. Her fans renamed her Pooper because of her pooping in George's bed. Luca got a few different nicknames, including Robert, baby and cat. Ten months after George adopted Luca on July 28, 2020, during a Livestream, George stated that Luca is breathing heavily and doesn't look like she feels well. George took his beloved pet to the vet, and they diagnosed her with a terminal disease. Luca was suffering from great pain and had to be euthanized.

In August 2020, one month after Luca passed away, George adopted a Hungarian Vizsla that his fans nicknamed "dog".

He stated that he loves cats and shares this passion with Dream.

Minecraft Championship is a Minecraft Tournament for content creators organized by Noxcrew. Ten teams of four compete in various minigames against each other. These minigames are decided by contestants themselves, and points gained for each minigame rise exponentially. This forces teams to start with the minigames they are not good at and save their most skilled minigames for the latest rounds. Two final teams with the most points face each other in the game of "Dodgebolt" to decide the winner.

George didn't participate in the first five Minecraft Championships but participated in every single one since the 6th to 14th tournament.

George did not participate in this tournament, which was won by Dream. There was a running joke that George is too busy with his girlfriend, but he never really shared why he didn't sign up.

How much does GeorgeNotFound make per month? Net worth!

George is one of the most known Minecraft content creators on YouTube. He has 9.3 million subscribers and gets around 1 million views per day. These numbers should result in him making somewhere between $100,000 and $150,000 per month. This makes his yearly income from YouTube over $1,000,000.

George is widely popular and active on social media, including Instagram (2.9m followers), TikTok (7.7m fans) and Twitter (3.1m followers). Which gets him different brand deals and sponsorships. He also owns his own merchandise called "GeorgeNotFound Merchandise" and earns a decent amount of money.

GeorgeNotFound exact net worth is unknown, and he often makes jokes when he asks his Twitch audience, "How much is GergeNotFound's net worth?". Some websites data suggest that his net worth is at $6,700,000. However, different websites think it could be as high as $9,400,000 when including additional revenues and brand deals.