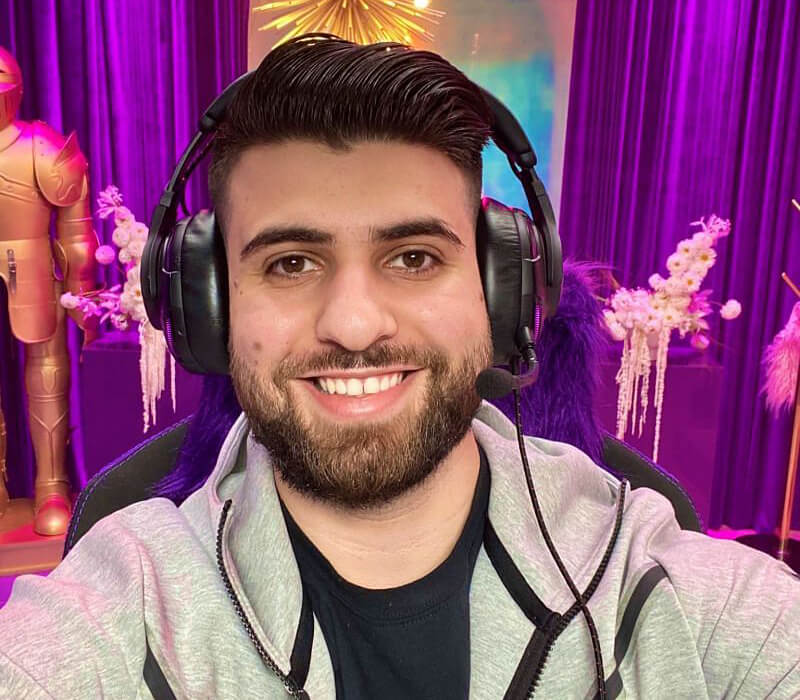 SypherPK is a content creator and streamer on YouTube and Twitch. Sypher's real name is Ali Hassan. He was born on May 10, 1996 (age 25). He is most known for his How to win series. This includes commented Fortnite gameplays, often featuring various different fellow streamers. Ali is also known for his highly technical Fortnite gameplay. He goes for those sick Twitch clips, more than trying to get the W. Ali is married to Daniella (Manishie) for 3 years. Sypher does Twitch streams 5 times a week. He takes one day off and one for creating content for his other channels. Ali has one brother, Omar, who doesn't stream and two other brothers who also stream on Twitch, Otto and Junior.

What can you expect from SypherPK?

You can find Ali's gameplay on three different channels. He is getting help from Jack, his editor and YouTube manager, JT, his video coordinator and Sunny, his helper. Sypher also owns one IRL channel featuring his dogs. His wife and sister-in-law are taking care of this IRL channel. Ali leaked that he has plans to start doing vlogs, where he will show his house and pc setups. While on stream with Ninja and CodeMiko, Miko asked if he had plans to post any clips from his workouts. Turns out Sypher is planning to create a new channel called "Sypher lifts" to publish his workout plans and his exercising. He also mentioned that there are multiple projects planned and said that he is excited about them.

SypherPK started as a Runescape YouTube channel in 2011 and stopped posting this content in 2013. After that, he played a different MMO called Elder Scrolls Online. He stopped playing ESO on April 14, 2016, when he got banned for account sharing. He played Overwatch and For Honor before he moved to Fortnite. SypherPK had 75 thousand subscribers before his popularity went over the roof.

November 2020 was when Sypher decided to lose weight and start working out. This wasn't Ali's first attempt, but it was his first successful one. Ali began to sharing his workout progress on his Discord channel. He tried to answer the most common questions and included some "how to start" tips that worked for him. This includes mindset, changing your diet and how to start exercising.

Sypher said that having such a great community rooted for him was a huge benefit. He is trying to create a community where people share and accomplish their fitness goals. Being part of a community can make you more motivated, develop plans or find new friends.

Ali and Daniella have multiple pets, including dogs, bunnies and a cat. Sypher has a total of three dogs.

Yuna is the youngest of all three and is by far the craziest one. She was supposed to be a foster dog, which means Daniella and Ali meant to return Yuna after a certain amount of time. They fell in love, and Yune has been part of their household since.

Aiko is the middle dog. She and her sister often jump on Ali's lap during streams and say hi to the Twitch chat.

Aegon is the oldest and calmest of all of their Aussies. He likes to stay off-stream and just chill.

Daniella and Ali used to have five bunnies. Two siblings Milo (Mee-low) and Lilo (Lee-low), were in foster care and got adopted.

A few weeks later, after adoption, three bunnies were taken by Ali and Daniella. Their names are Butter, Peanut and Jelly. However, Jelly was suffering from a head injury called 'E. Cuniculi' caused his head to be slightly tilted to the side, making him suffer a lot. Jelly has been put down by a vet because this injury couldn't be cured.

Ali's last pet is Mikasa, often called just Mika. Mikasa is a cat they have owned since April 27, 2021. Mika is white with light brown legs, tail and face. In Ali's streams, you can see a cat tree in the background where Mika often hangs around and craves attention. She is also known for laying across Sypher's keyboard or mouse pad.

The career of SypherPK

SypherPK is sponsored by multiple companies, as well as having a streaming deal with Twitch. Ali shows his mouse and keyboard at least five times a month to promote his sponsor, ROCCAT. Ali has done multiple streams, sponsored by numerous well-known companies, including EA.

How much does SypherPK make a year? Net worth!

Ali's net worth is around $3.2 million, most of his earnings come from YouTube and Twitch donations. SypherPK has earned over 50 thousand dollars in Fortnite tournaments and his merchandise. A rough estimate is that SypherPK is making around 1500$ per day from all of his activities.

SypherPK is Ali's main channel. You can find a new Fortnite video every day on this channel. Ali is trying to cover Fortnite from every perspective on this channel, reactions to new weapons, new maps, new game modes or his own gameplay. On rare occasions, he posts 50-man scrims on custom maps.

This channel was initially created for Sypher's Twitch clips. More SypherPK is now used to react to YouTube videos, do challenges, and talk about more minor things in Fortnite.

Sypher Plays channel was created to cover other games than Fortnite. On this channel, you can find Sypher playing Fall Guys, Among Us and Minecraft. New videos are usually uploaded on Sundays and Thursdays.

This is a channel about his Australian Shepherd dogs. Aegon, Yuna and Aiko compete in challenges, react to new dog toys and food or treats. There hasn't been a video posted on this channel for more than six months.

Short clips from Sypher's streams and YouTube videos are uploaded to this channel. Videos are usually under one minute long. Ali's fans post these clips to the PKHOOD Discord, and one of them is selected every week. The winner gets an Amazon gift card.