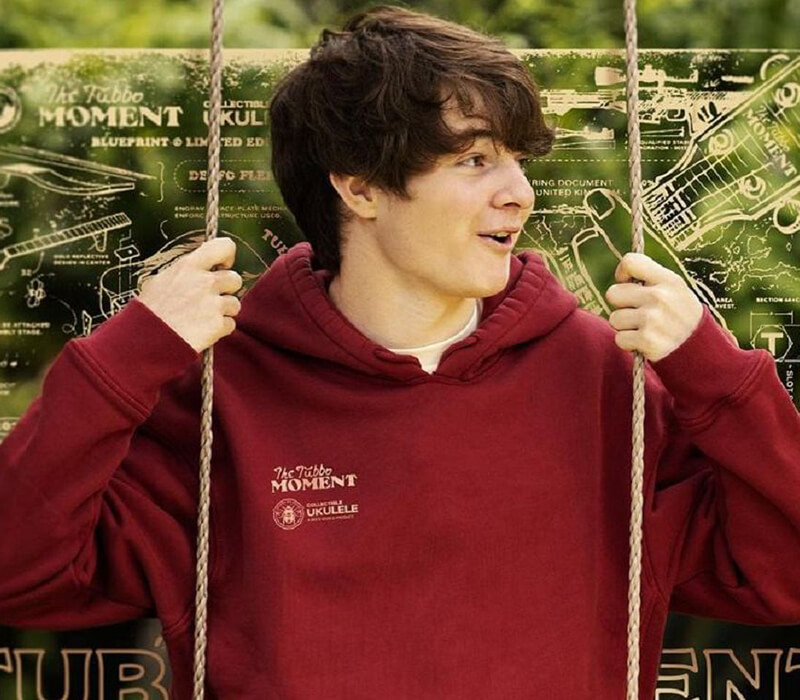 Tubbo is a British YouTuber and Twitch streamer. He is famous for Minecraft player, uploading MC oriented content to his YouTube and streaming his MC gameplay on Twitch. His real name is Tobias "Tobby" Smith. Tobby was born on December 23rd, 2003 and is currently 17 years old. Tobias was born in the UK and has two younger sisters Lani and Teagan. Tubbo is part of the Dream SMP team and often plays on his server.

Tobby is also known to be a musician. He plays ukulele, piano, melodica, steel pan in his free time and is currently learning guitar and saxophone. He was featured in a song called "Life By The Sea," created by CG5 and Dan Bull and released on August 27th, 2021.

Tubbo started his streaming career in 2019. He quickly gained a lot of popularity as a Minecraft player. He starred in several videos of another Minecraft celebrity, TommyInnit. It gave him a nice little boost to help grow his fanbase. He broke the 1 million followers line on Twitch in November 2020 and became Twitch partner the same year.

Tobby also streams Skyblock, a Minecraft world where you start on a small floating island, or adventures from his modded SMP server. Tubbo was invited to join SMPEarth, a huge Minecraft survival server featuring a large content creator community. He soon became well known as the first and only player who got killed by an AFK player. Tubbo was hired as a hitman to kill VoiceoverPete, but died instead and lost his diamonds instead.

Server SMPEarth was shut down in April 2020.

Tubbo YouTube channel was launched in 2018 but didn't get too many followers until his Twitch channel fully took off.

Most of his YouTube videos are Minecraft oriented, and he often posts edited versions of his Twitch live streams.

How many fans does Tubbo have?

As of November 2021, Tubbo skyrocketed amongst top Twitch streamers and more than doubled his fan base throughout one year. He is also popular on different social media platforms.

Lani Smith is Tubbo's younger sister. She was born on October 29th, 2007 and is 13 years old. Lani is better known as LanuSky, and she is, as her brother, a British Minecraft player and Twitch streamer. She got attention after frequently playing on Dream SMP and playing with TommyInnit on his stream. Lani owns a server called Lanu Network, an SMP and Skyblock server.

Tubbo met Tommy when Tommy raided his stream. On that day, they were both tiny Twitch streamers with small audiences. This was before either of them had YouTube accounts. A lot of things changed, but those two remained close friends. Tommy is also a Minecraft celebrity, and they produce similar content, most of the time even playing together. They are both about the same age, but Tubbo is older than Tommy by 4 months, and he often reminds him that when they play together. They explore hacked clients together, and Tommy constantly mocks Tubbo about his knowledge of hacked clients and MC servers.

Ranboo is one of the members of the Dream SMP team and one of Tubbo's friends. He is also a streamer and YouTuber. Shortly after becoming close friends, Ranboo started planning to visit Tubbo in the UK. He flew all the way from the US to the UK on June 26th, 2021 and appeared on Tubbo's stream the same day. Ranboo stays at Tubbo's house until the end of October 2021, when he has to return to the US.

Tobby works on events and servers with iMoltres, Ternmaex, ElectroTech, 0LM13 and Wising.

Tubbo has worked on a couple of different projects throughout his career.

One of his mentionable projects is an anarchy server called POGGOP, and it was what it sounds like. Complete anarchy. People were going crazy, and people were having a good time, but the project was soon abandoned because of development issues and lag problems.

His second project worth mentioning is a mini-games server called Qube Mini-games Network, launched in June 2020. The server was running for two months and provided some content for Tubbo's stream. It was shut down because of code licensing problems.

The third server is called Tubbo Network, also called TubNet, which was launched in 2019 and re-launched later as a crossplay mini-games for both Bedrock and Java editions of Minecraft.

Minecraft Championship is a Minecraft Tournament for content creators organized by Noxcrew. Ten teams of four compete in various mini-games against each other. These mini-games are decided by contestants themselves, and points gained for each mini-game rise exponentially. This forces teams to start with the mini-games they are not good at and save their most skilled mini-games for the latest rounds. Two final teams with the most points face each other in the game of "Dodgebolt" to decide the winner. Tobby didn't participate in the first 8 Minecraft championships.

For most of the game, Pokimane didn't have an MCC official texture pack on, which is crucial for seeing necessary blocks in the MC Championship. This tournament is connected with a lot of toxicity when Tommy's stream started shipping him with Poki and also harassed her. Against all odds, this didn't cause any drama. Pokimane stated that she might take another peek into pro-Minecraft in the future.

Tubbo's earnings from other avenues

Before Tubbo started his streaming career, he used to be a national-level trampolinist in England. Tubbo is no longer a trampolinist, but you can find some vlogs from trampoline parks on the internet.

Tubbo has his own merchandise with different clothing and also ukuleles which he himself plays. This merchandise is often limited edition and is released in small batches. Even though this merch costs a considerable amount of money, it gets sold out very quickly.

Once TubNet launches, it's gonna become another avenue of income. This project is in its final stage, and Tobby is currently hiring testers.

Tubbo's earnings as a Youtuber

Tubbo has almost 3 million subscribers on his YouTube channel. This channel was created in 2018 and is already about to cross the 3 million line. Instead of posting multiple videos per day, Tubbo focuses on quality and posts only 3-5 videos per month. Even though he posts only a couple videos per month, this still nets him somewhere between $9,000 and $11,000, resulting in about $120,000 per year. He is also making additional money from different sponsorship deals.

Tubbo's earnings as a Twitch Streamer

Tubbo has an average of 19k subscribers per month on his main channel and around 1.5k subscribers on Tubbolive, his second channel. For simplicity, we are just gonna assume every one of them is a tier 1 subscriber, which is the cheapest subscription you can get. Twitch yoinks half of the subscription money, and the rest goes to Tubbo.

His main channel makes around $50,000, and Tubbolive makes approximately $5,000 per month.

This means both of his channels give him a nice income of $610,000 per year. This math didn't include any higher tier subscriptions, PayPal or bit donations and sponsored streams. In reality, Tubbo is highly likely to earn much more than $610,000 from Twitch per year.

Tubbo's sponsorship deals and net worth

Tubbo is known for not promoting products, and he is not doing sponsored streams very often. One of the few streams he did was an Adobe-sponsored art stream where Tubbo used Adobe Photoshop and was just goofing around, creating different pictures and "art pieces".

He also did "The Tomorrow War" stream sponsored by Amazon Prime.

The exact amount of money earned from these streams is unknown. Still, if we consider Tubbo's average number of viewers per stream and his internet presence, this sum should be astronomical.