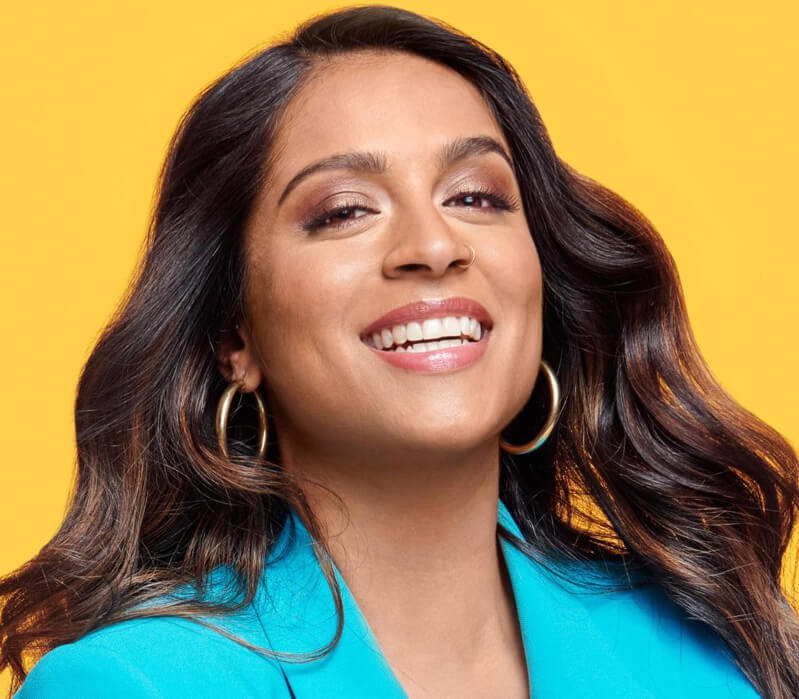 Who is Lilly Singh?

In 2016, Lilly debuted in her own documentary chronicling her “Trip to Unicorn Island” world tour.

In 2017, Lilly released her first book, “How to Be a Bawse: A Guide to Conquering Life”. Her book even made it number one on the New York Times best-seller list. In 2021 Lilly released her second book, how she stopped being lost in life and found her happier self, “Be a Triangle”.

In September 2019, Lilly Singh landed herself a contract with NBC for her own late-night talk show. A Little Late with Lilly Singh is a talk show, just like Jimmy Fallon and Stephen Colbert did for years.

Lilly Singh was born on 26th September 1988 in Markham, Ontario, Canada. Both of her parents, Malwinder Kaur and Sukhwinder Singh, are of Indian descent and immigrants from Hoshiarpur, Punjab. Lilly has one older sister Tina Singh who is also a fellow YouTuber. Tina’s channel includes mostly videos about her everyday life with her husband and three sons.

Lilly described herself as a tomboy when she was a child. She attended Mary Shadd Public School. In 2006, Lilly graduated from B. Pearson Collegiate Institute in Toronto.

Before becoming a YouTube star, Lilly was working towards a Bachelor of Arts degree in psychology at York University. Lilly always said that if her YouTube career didn’t work out, she could always go back to her degree. Luckily for her, she blew up in popularity and even got her own show on TV.

Lilly Singh is proud of her Indian heritage and developed substantial connections during her visits to Punjabi. She shared about her mental struggles and arachnophobia. YouTube was a way of sharing her feelings with other people and helped her get through it.

In February 2019, Lilly Singh came out as a bisexual via social media. In a Vogue video interview from April 2018, she keeps her personal life private and even stated, “I want to date the old fashion way without social media.”

Lilly Singh started her channel in October of 2010, at 22 years old. It is safe to say that Lilly has a considerable income from YouTube, but she shared that was never the reason why she started doing it. Her channel “IISuperwomanII” was a way to deal with her depression and mental struggles. Money was just a natural outcome when people loved watching her journey.

On 18th January 2011, Lilly posted her first video that became viral. The best way to describe this video is to just show you Lilly’s description: “Welcome to Superwoman’s official guide on how to deal with, understand and survive brown girls.” It gained over 10,000 views within a day, and as of 2021, 2 million views. There was no looking back, and her career just snowballed from this point.

In a lot of videos, Lilly stares at her own parents. Lilly said that some aspects of her parents from her videos are true, but it is highly exaggerated. She also revealed that many of her lines for her Manjeet character are directly from her real dad. Looks like Lilly owes her dad some royalties.

In December 2011, Lilly launched her second channel, “SuperwomanVlogs”, where she started posting back-stage videos and vlogs from her everyday life.

Besides Lilly being herself, hilarious and generally enjoyable, Lilly shared she noticed a significant gap in South Asian content. Her bizarre mix of confession, ranting and standup comedy filled this gap perfectly, and Lilly blew up in popularity.

By 2013, Lilly built a solid audience among South Asian teenage girls living in Canada, US, UK and Australia. The same year, Lilly already hit one million subscribers but quickly realised one tiny problem. When your videos emphasise one particular culture, you will inevitably hit a cap on viewers. As you can guess, Lilly decided to diversify her content and needless to say, it worked.

Lilly was still doing the same content with the same Indian parent characters. Although this time, she decided to target a wider audience. It paid off, and Lilly blew up in popularity again, this time worldwide.

In 2014, Lilly collaborated with famous internet stars such as Grace Helbig, Connor Franta and FouseyTube.

Lilly Singh took a break from YouTube in November 2018 for her own mental health. Lilly shared a video titled “I’ll see you soon...” and said she was “mentally, physically, emotionally, and spiritually exhausted”. However, a month later, she was back posting YouTube videos again.

Lilly has been more active on her social media during the pandemic. She was trying to create relatable content. There was one video in particular that stood out.

There was no sign of comedy, and it looked like a miniature re-creation of the movie “Get Out”. It perfectly captures how Instagram affects our everyday lives. How we demand validation from other people and measure our happiness in likes. How our mood can go from a hundred to zero in seconds. How come everyone is following him and not me? And why does he have more followers with fewer posts? Maybe you felt that sense of disappointment when your “Perfect Picture” didn’t get as many likes as you thought it would.

Lilly describes Instagram as a massive time sink blackhole and incentivises people to get off their phone back to reality. As of 2021, “Get Off Your Phone” has over 1.5 million views and almost 1 million views on YouTube.

Our mental health has a hard time keeping up with the chaos that social media is. No matter how much you say, you don’t care about strangers’ opinions. People should never forget to take a break or two from their phones and prioritise themselves.

Lilly debuted in her first acting job in 2016 for the movie Ice Age: Collision Course as Misty / Bubbles. This paved her way towards more lucrative jobs such as F the Prom as Miss Fallsburg, The Simpsons as Kensey, and she is planned as a judge for 2022 Canada’s Got Talent judge.

In March 2019, Lilly took her popularity to a whole new level when she signed a contract with NBC. She was the first woman of colour and the first bisexual woman to host a late-night talk show on a major US network.

Her show debuted in September of the same year. It didn’t differ much from her YouTube channel. Although this time targeted a far wider audience.

Lilly’s guests weren’t new either. She has already established relationships with other well-known YouTubers and even famous personalities attracted to her online fame. For example, Dwayne Johnson became an early ally because of his daughter, who was her big fan.

To this day, Lilly Singh runs her own show not too different from the shows Stephen Colbert and Jimmy Fallon have been running every night for decades. The very first guests of the show were Mindy Kaling and Rainn Wilson. Her show ran for two seasons and ended in June 2021.

The unicorn island of Lilly Singh

Lilly found the gap in the market and filled it with her hilarious content. She is proud of her heritage, and that’s the reason why most of her fans come from South-Asian countries or have South Asian origins. You can always find comments about how her fans’ parents are the same as the ones in Lilly’s videos. Lilly founded her own community of “unicorns” by consistently sharing personal stories of her life to connect with them.

After spending years directing, producing, editing and scripting her own content, Lilly decided she was in a perfect position to educate the next generation of digital storytellers. At the Unicorn Academy, Lilly is trying to turn inspiring people into educators. She is trying to strengthen the creator economy and inspire the new generation.

The controversy of Lilly Singh

Lilly Singh wasn’t involved in much drama, but it is unlikely to entirely dodge controversy while being famous.

During the 2017 People’s Choice Awards, Lilly was rumoured to have been involved in a feud with Yara Shahidi.

More importantly, she had a beef with another YouTuber Trisha Paytas. It all started when Shane Dawson mentioned Trisha’s name. Shane and Lilly were shooting a video together, and he noticed Lilly was using a fisheye camera. It’s the same camera Trisha uses.

During a vlog, Shane asked, “You got a Trisha Paytas camera?”. Lily unsarcastically responded, “A who? What?”. Shane explained to Lilly that Trisha is another YouTuber who uses this camera.

That was it. Lilly honestly didn’t know who Trisha was, which made her mad. Trisha kicked off a racist conversation regarding Indians in her next video with Shane. After a few offensive remarks, Trisha backed off. “No, we love the Indians. We’re just saying there are not many Indian YouTubers.”

How much does Lilly Singh earn? Net worth!

Lilly’s estimated net worth is $20 Million as of 2021. She has multiple different sources of income.

Lilly has around 350,000 thousand views per day across all of her videos which are estimated at approximately $2,700 per day. She is expected to earn almost $1 million per year from YouTube alone.

Lilly Singh posts regularly on her Instagram with almost 11 million followers. She showcases her new products, advertises her shows and even posts pictures from her everyday life. Lilly collaborated with popular brands such as Calvin Klein, Olay, Coca Cola, and Pantene through this channel. She even promoted products from Kate Spade handbags.

As of her TV world revenue, Lilly ran her own late-night talk show on NBC and even released her own documentary film. “A Trip to Unicorn Island” is a movie about her incredible worldwide tour and her rise to fame. Initially released on YouTube Premium, it is now available on various platforms such as Sony Playstation Store, Amazon Videos, and Apple iTunes.

Lilly’s first book, “How to Be a Bawse: A Guide to Conquering Life”, won an award for best “Best Non-Fiction” at the 2017 Goodreads Choice Awards and even went to New York Times best-seller list. In 2021, Lilly released her second book, “Be a Triangle”, about how she stopped being lost in life and found her happier self. It is hard to determine the revenue of a best-selling author, but it’s safe to assume it was at least six figures.

Lilly is not your regular beauty influencer, but she still dipped their toes into the makeup industry. She released her own limited lipstick edition, “Bawse” by cosmetic brand Smashbox.